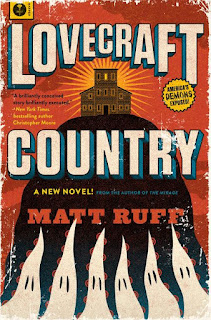 Berry is sort of an old wise man character in the novel, always there delivering helpful truths and constructive advice when needed. Here he is unraveling Atticus's – and his own – conflicted feelings towards science fiction and fantasy literature. They are both in love with genre classics such as Edgar Rice Burroughs and H.P. Lovecraft but at the same time register that the authors and their works are deeply problematic, especially from the viewpoint of black readers which is what both men are.

The novel takes place in 1950s, but this discussion is a flashback. It is possible that they are supposedly discussing racist undertones of Lovecraft's fiction during the same decade when Moore's Ford lynchings and other infamous killings and home burnings happened, not to mention less lethal forms of systematic oppression in Jim Crow America. I'm not completely convinced that a person who publishes a guidebook dedicated to keeping traveling black Americans safe and alive would really be as generous as uncle George here, but this lingering doubt of the plausibility of the characterization is about the only negative thing I have to say about the novel.

Come to think of it, I'm also not quite sure whether Lovecraft's racism would really have been a talking point among fans in 1940s. Fantasy fandom was happy to give his busts around for 40 years during much, much more modern times, after all, stopping only occasionally to contemplate whether the bust was flattering enough to its source. Ruff's characters and their concerns may seem a bit contemporary at times, but I don't think that it spoils any of the fun, frankly.

Lovecraft Country is formed of consecutive paranormal tales which foreground different members of the novel's cast. The cast is all-black and that is the point – even (or especially) the story which begins with a mysterious metamorphosis of one of the characters into a white-skinned version of herself really draws its power from the discussion of race: how black Americans of the not-so-distant past were second-class citizens in an unbelievable variety of ways. "Nevermind the paranormal stuff – isn't that just horrific?" is to me the question that the book is asking its reader.

Actually, the horror fantasy content of the novel is so un-horrific that it is extremely unlikely to scare anybody. Ruff's light-hearted tone makes it clear from the beginning that nothing too brutal is going to happen to any of the novel's main characters. There is a sinister white shadow looming over all the cheerful action, however, and the mix of registers is interesting. It's a happy book about awful stuff.

In the novel, familiar horror and science fiction tropes are contrasted with the deep-rooted racism and bigotry of the era, and the latter is what the reader will probably consider otherworldly. Moving in to a haunted house is nothing compared to the neighbors who try to spook and vandalize the new home owners to move out of a previously white-only block. What's more, buying a property in the first place was a bureaucratic nightmare for people of color, and Ruff has the infodumps to prove it.

So, there might be a Shoggoth or two running loose in the bushes, and Cthulhu cults scheming to open gateways to alien dimensions, but neither are as dangerous as white sheriffs.

Ruff's book started out as a TV series pitch – it was meant to be an X-Files style show in which the excuse for weekly paranormal adventures was that the characters were collecting data for The Safe Negro Travel Guide. Even though the original pitch was unsuccessful, we are in fact going to see what the people putting together this twisted Hitchikers' Guide to the Galaxy are going to look like on the screen, because now there is a TV show in the works.

I recommend reading the book first, though, because Ruff's prose has levels that the camera probably won't capture.

Penalties: -2 for cardboard cut-out characters (-1 in case you are not as severely allergic as I)