Interview: Rena Barron, author of Kingdom of Souls and Reaper of Souls


Dark magic,  danger,  trading years of your life in a gamble to save everything you love. Ambitions, legacies, and courage.  An imperfect heroine who has to make the hardest decisions in the face of transgenerational trauma.  I told you all of that first, because once you see the cover art of Rena Barron's books, you'll stop reading and click right over to your favorite bookstore's website to place an order.

Rena Barron's Kingdom of Souls came out last fall to much acclaim. A YA novel where a teen protagonist inherits the power of her people, and the responsibilities of stopping an ancestral evil from destroying the world. Arrah is tenacious and driven, but is she strong enough?  How much is she willing to give up to get what she needs?  A powerful tale of witchdoctors, sacrifice, and ambition, this looks like an incredible read!   And don't worry about a cliffhanger ending, as the sequel, Reaper of Souls, will be here before we know it, in February of 2021,  with a third book in the works.  Film rights to the series were recently sold to Warner Brothers, with Michael B. Jordan as producer.

If the YA reader in your household has a younger sibling who isn't quite old enough for Kingdom of Souls, Barron also has a middle-grade title coming out this September, Maya and the Rising Dark. In this contemporary fantasy set in Chicago, when pre-teen Maya's father disappears, it puts her at the center of a battle between our world, the Orishas, and the Dark World. Can she save the world in time to attend ComicCon?

Barron has loved fantasy stories her whole life. She read non-stop as a child, and yearned to see more characters who looked like her.  Kingdom of Souls first came to the attention of agents and editors during 2017 Pitch Wars, when it was titled "The Last Witchdoctor".

NOAF: What inspired you to write Kingdom of Souls?

RB: The world of Kingdom of Souls was inspired by tales of people in my community who practiced voodoo and the stigma around that tradition. In a sense, the story explores me coming to terms with how those tales shaped my perception.

I have rarely (if ever) heard of voodoo, witchdoctors, folk magic, or any traditions from Black communities presented in a positive light in western society. I wanted to write a story that could subvert that perception and paint this idea that magic isn't good or bad; it's how people choose to use it. 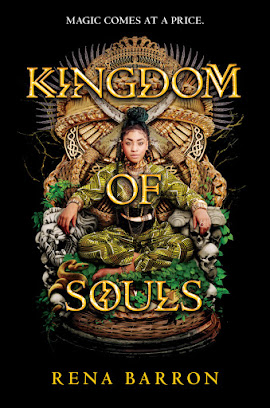 NOAF: You participated in 2017 Pitch Wars, and came away from that experience with multiple offers of representation for "The Last Witchdoctor". What was it like to participate in Pitch Wars? What do you know now, that you wish you knew then?

RB: Pitch Wars was a whirlwind of emotions, very little sleep, and frantic revisions. I met my most trusted writing critique partner and good friend, Alexis Henderson ("The Year of the Witching") during Pitch Wars. We spent most of the three months swapping pages to get our manuscript into shape.

I'd gone through ten years of querying different manuscripts and getting rejected prior to entering Pitch Wars, so I didn't really go into it with many expectations. Before I entered Pitch Wars, my last manuscript had gotten a lot of bites from agents, including requests to "revised and resubmit," so I felt that I was getting close. Speaking strictly from interacting with the mentees and sharing information, I wished I would've known that everyone's experience would be widely different.

NAOF: Arrah is such a fascinating character! She's so young when she has to make life altering decisions. When you were first working on this series, how did you develop Arrah's character? Did she change at all, from your original idea, to the Arrah that readers meet?

RB: In a sense, Arrah's trading years off her life in exchange for magic is a metaphor for the sacrifices and struggles that we face in everyday life. She is powerless in her world, but is she really? It's not magic that drives her desire to protect her friends and family; it's her heart, tenacity, and courage. Those are her greatest gifts. One thing that is subtle in her character, too, is that she is suffering from transgenerational trauma. Writing her character was an exercise in examining my own traumas. That was the key to her character for me. She's a survivor.

When I was first developing Arrah's character, I leaned heavily on exploring the expectations, disappointments, and challenges that she would face and how she would attempt to overcome impossible odds. I wanted her to feel real and well-rounded—not like a caricature.

NOAF: Arrah doesn't know everything, and she's not a perfect person (perfect people are boring, if you ask me!). She makes mistakes, and she's flawed. Why did you choose for her to make those particular mistakes? Why does she have those particular flaws? How do her mistakes and regrets shape her future decisions?

RB: Often we like our heroines to have superficial flaws, but I don't see that as true to human nature. Arrah makes mistakes; she's not perfect. She's flawed, driven, and relentless in her pursuit of what she believes to be right. The mistakes that Arrah make stem from her thinking that she has to be the one to fix the world. It's not a spoiler to say that she’s right, but she doesn't have to do it alone.

NOAF: Who was your favorite character to write?

RB: Arrah's grandmother is one of my favorite characters. She's the leader of her tribe, strong, iron-willed, patient, and always has a trick up her sleeve. 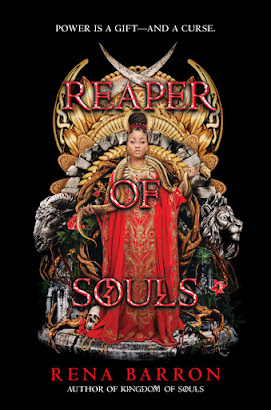 NOAF: Without giving us too many spoilers, can you tell us what's next for Arrah and her friends in Reaper of Souls?

RB: The end of Kingdom of Souls leaves Arrah in a really tough spot. She's going to have to reckon with her mistakes and decisions while facing bigger problems in Reaper of Souls. Expect to see much more of Arrah's friends—Rudjek, Sukar, Essnai, and the whole crew.

RB: I love that the cover of Kingdom Of Souls incorporates so many elements from the book. The throne, the lion head, the snake, and the bone charm are all important symbols in the story. The artist, AdeyemiAdegbesan, really hit it out of the park. I was very fortunate to provide early input into the design, and I pitched the idea of a girl on a bone throne.

NOAF: You grew up reading fantasy, outer space, and adventure. What were some of your favorites?

R.B. Most of the books I gravitated toward were adult. I think it was because I've always loved complicated stories more on the dark side, and I don't recall seeing a lot of that in kidlit at the time. I do remember enjoying the Last Vampire series by Christopher Pike, the Animorphs series, and anything by RL Stine.

NOAF: Thank you so much for letting me interview you!