Microreview [book]: Library of the Unwritten by A.J. Hackwith

An In Nomine-like story of librarians of unwritten books, avenging angels, demons, and a book that could start a war between Heaven and Hell. 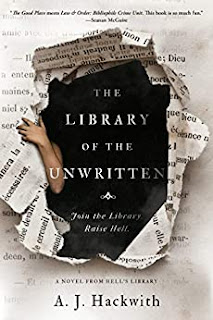 “Magical librarians” is a 50,000 foot high concept that is catnip to a lot of genre readers, I feel. The slight hint of the “Librarians Militant” in Vernor Vinge’s Rainbow’s End made me wish that someone would write those books. Genevieve Cogman’s fantastic Invisible Library series gives us interdimensional traveling librarians. And who can forget the Librarian in the Discworld novels, master of L-Space?

AJ Hackwith has a different and unique approach. Her librarian, Claire (not a demon, just a dead soul) , is the librarian of a wing of books that never have been written, books that want reality, books whose characters want shape and form. That library is not on Earth, and not in Heaven, either, but rather in Hell. And when a very special book becomes a prize, Claire seeks to bring it to the titular Library of the Unwritten.

There is a permanent ache in the soul at the idea that books that their would be creators have never put to paper and created have a life and existence of their own, in a library in hell. In the world of Hackwith’s novel, the version of me that exists in that world most certainly has multiple volumes in that Library, with characters as eager as Hero, a character who escapes his book in the beginning of the novel, to escape their books and find lives of their own.

After a set piece that establishes Claire’s ordinary job, the novel’s plot turns on a book that should not exist. Angels don’t write books, and neither do Demons--that’s the province of mortals, humans. But when there is evidence of pages of a bible written by the Devil himself, that’s something that gathers a lot of attention from both sides of the Celestial Divide. Such a rare item is by its nature a potent artifact, one that might start or finish a war.

In addition to the Unwritten Wing of the Library and its librarians (Claire, the head librarian, and her assistant Brevity, formerly a Muse) there is a wide cast of characters. The aforementioned Hero who escaped from a book winds up joining the plot, as do demons and angels of various stripes, struggling to find and grab hold of the book. The author does a good job giving each of the characters, not just Claire, clear story arcs and goals, giving them rich lives that extend through the narrative. The moments of action in this book are relatively infrequent, and characters in heated debate and discussion take up far more of the book. It’s fortunate that the characters are so well done, or else those scenes might drag on a bit too long otherwise. The author also has a penchant for switching point of view between chapters but still basically in the same scene, providing a variety of perspectives. Sometimes this causes some doubling and recapitulation of the scene from another’s point of view. What the characters are feeling and thinking is extremely important to the author and what gets highlighted in the narrative. This is not an action packed book, although there are some action sequences, this is much more focused on debate and thought. That said, with the exception of an epic showdown sequence in Valhalla, the action sequences are not the strength of this book in any event. It’s grounded and relies on the characters.

As I read the book, I kept thinking of the RPG In Nomine, and how the events of the book could fit into that universe or a similar role playing scenario. However, Claire is a human soul, and not a demon, so in the game (as well as in the book), she would have to think and act outside the box and without direct confrontation to deal with the higher power threats that she faces. The complexity of the characters, their agendas, external forces, and of course the MacGuffin itself all really resonated with me because of my experience with the game already preparing me for a fantasy world like this, and my enjoyment of Hackwith’s worldbuilding and character beats were enhanced by that mental connection. I particularly liked Walter, the keeper of the Gates of Hell. And, as it turns out, much more.

I listened to this book in audio and I have to said it was an immersive and enriching experience for the most part and I have almost no complaints about it except for one pronunciation of one of the character’s names. In the audio, the name of one of the angels (actually a Nephilim watcher) is rendered in the audio as something like “Ramiel”. Imagine my surprise, when checking the chapter titles to see who was upcoming as point of view characters, to see “Romeo” listed. I wondered for a bit if I was going to meet a new character and POV I had not met before, and only after listening to the chapter, realized the unusual pronunciation of the name. I also checked a physical copy to make sure that the audiobook just didn’t have the name of the character wrong in the chapter titles, too. Other than that annoyance, I found the elucidation of the voices of the characters, from Claire to Brevity, to, yes, Romeo and other POV characters to be effective and clear.

There are some first novel snags that I noticed, particularly in a bit of a lack of smoothness on the plotting. And there are a few events that I have questions about the effectiveness from a plot point of view, its a little bit of roughed deckle edged paper rather than being clean and concise and crisp. I fully expect future novels from the novel to improve in this regard.

The Library of the Unwritten is very clearly the first in a series, given the ending and how things ultimately fall out, and I am certain the premise and setup of the universe and how and what that denouement means gives plenty of room for further volumes. One could one and done the series here, there is a complete and full story on tap here, but clear lines for future novels.. Happily, a second book in the series is forthcoming. I slept a bit on this one, I intend not to make a similar mistake with its sequel

Bonuses: +1 for interesting worldbuilding and premise executed engagingly and well; +1 for a no nonsense librarian protagonist.

Penalties: -1 for a few plot points that feel a bit undercooked compared to the main run of the plot.