Comic Con at home has come and gone and from my perspective it was quite successful at capturing the appeal of Comic Con and delivering it to my home.  While social media impressions were down over 90%, I don't think the goal was to ever replace the in person experience.  My family had a great time printing out our badges, setting up our signs, and pouring through the schedule to identify what panels we wanted to "attend".  We even secured some exclusive merchandise and my daughter scored swag from Lego in the form of a comic book that they printed on demand and mailed to our house. 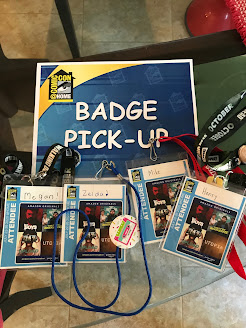 The Panels:
While it doesn't capture the excitement of actually being in Hall H during one of the big-time panels, the panels that I "attended" felt like a traditional Comic Con panel without the traditional series of bizarre question and answer sessions that normally wrap up each session. As I noted, the ability to watch panels at your convenience was welcome and it also ensured that I would not miss out on any content I wanted to see. 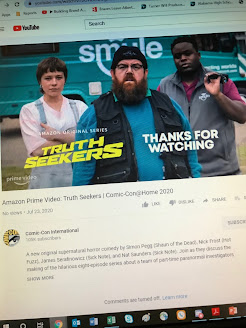 Of all of the panels I watched either by myself or with my family, the four that stood out were the panels featuring Phineas and Ferb, Marvel's 616, Amazon Prime's Truth Seekers, and the return of Bill and Ted.  After attending the tear filled farewell to Phineas and Ferb panel years ago, I was delighted to hear that a new movie, Candace against the Universe, will launch on Disney+ on August 28!  Disney+ also highlighted a new docu-series, Marvel's 616, that looks absolutely delightful. The series will focus on the history of Marvel comics as told from the perspective of various creative talent. Each episode is unique and the two that were highlighted focused on women in comics and obscure villains. Truth Seekers, a new comedy from Simon Pegg and Malcolm McDowell looks like an absolute delight and the return of Bill and Ted next month is most excellent. There were many other phenomenal panels that you can still check out!  See the full schedule and YouTube links here!
The Merch:
In preparation for online drops I did my usual research into what Funko was offering and how to scoop the new Lord of the Rings figures from The Loyal Subjects.  Despite seeing rumblings on Twitter about how fast everything was selling out, things ran smoothly from my end and I should be getting some Pops, Action Vinyls, and even a dumpster fire in the mail shortly via 100Soft!  I am most excited about the Lord of the Rings figures from the Loyal Subjects and they will even feature a "Covid-19" foot stamp to note the bizarre comic con experience of 2020.
Final Thoughts:
I am curious how Comic Con at Home will impact future conventions.  I am sure some studios didn't get the buzz they wanted due to online panels, but others probably benefited from more exposure. It will be interesting to see a cost/benefit analysis for movies and television shows, along with the merchandise vendors who had no issue selling out of exclusives. From a selfish standpoint, I loved being able to customize my SDCC schedule in a way that worked for me and it was also very easy to share panels that were of interest to my kids with them. While the difference between the in-person convention and the virtual one are huge, it really felt like I was back at SDCC and quite enjoyed my experience.
POSTED BY MIKE N. aka Victor Domashev -- comic guy, proudly raising nerdy kids, and Nerds of a Feather contributor since 2012.
Posted by Mikey N at 10:00:00 PM