Microreview [book]: Ashes of the Sun by Django Wexler

The beginning of a stunning secondary world fantasy universe, in a decaying empire set in a post apocalypse world. 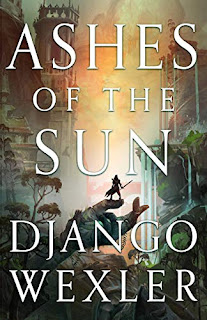 In a world built on the ruins of an apocalypse, a Republic tries to protect its citizenry from the plaguespawn, magical deviant creatures, and the dhakim, users of forbidden magic. All of the leftovers from that apocalyptic war are a danger to the people they are sworn to protect. But at what cost? The strictures and restrictions of the Republic also erode freedom, and the possibility of corruption and selfishness undermine what the Republic is all about. So when a supporter of the Republic, Maya, and her brother Gyre - who wants to take it down - collide, the literal fate of a world hangs in the balance of a conflict that divides siblings.

Maya and Gyre’s stories comprise the heart of Ashes of the Sun, the first in a new fantasy series by Django Wexler.

Django Wexler’s previous epic fantasy series, both YA and adult, have shown a capacity for intense and interesting worldbuilding. This is on display in the premise here: a world which has rebuilt itself after a titanic magical apocalypse where both sides, Chosen and Ghouls, have fallen; as well as in the magic systems, and the institutions and locales. The Twilight Order, inheritors and successors to the Chosen, forms one side of the conflict, and its use of magic (deiat) for purposes both good and sinister forms the core of worldbuilding. The Twilight Order, working against magical threats, is in a very real way the Republic embodied, and yet we see how they are institutions built on shifting sand. We see Maya’s story through the institution of the Twilight Order.  And then there is the fully imagined and realized city of Deepfire, home of Gyre, a city perched on a chasm, with tunnels of lost technological magic, and the brooding presence of the Order in a city on the border. Gyre lives a very different life than his sister, a life that gives and informs his perspective and that ultimately puts him at odds with her.

Both of these poles of worldbuilding, and all of the ancillary bits that spiral from them, make for a rich world that I ate up with a spoon. There are motifs and riffs, and I am sure I missed some of them (I strongly suspect some of them are anime-focused, given the high four-color magic and powers) but I did recognize the Star Wars touches for certain. The novel reminded me of works by authors like Joseph Brassey and Mike Underwood. I also appreciated the vaguely Roman Republic touches in the names of some institutions and world bits: Auxiliaries and Legionaires are definitely borrowed from Rome. The ranks of the Twilight order, Agathios, Centarchs and Kyriliarchs, are invented but fit in with the themed naming conventions. The author does a great job with language and invented words to help bring the world alive.

Within that world, of course, we have our protagonists. The novel introduces the siblings and then splits them sharply, putting them on opposite sides of the divide between supporters of the Republic and the Twilight Order, and people like Gyre, who have taken the lesson of Maya being torn away and the wreckage of his family, and seeing the flaws of the Republic. The reunions of the siblings are under duress and stress, and the author provides no easy resolutions upon their meeting again. And too, their sides of the conflict and their years-long inculcated beliefs and personalities do not flip  at their meeting again. And even more carefully, seeing from within and from without, it is clear that neither sibling and neither side has a monopoly on truth and are in the right. Both characters develop nicely with the relationships of the people around them as well as the institutions they support, or fight against.

The novel is queer friendly in giving Maya a same-sex attraction, and a potential relationship. Ashes of the Sun is really good in showing the awkwardness of youth in trying to navigate feelings and emotions in a high pressure situation and at the same time, this is a world where both same-sex and heterosexual relationships are equally accepted.  Gyre has a similar, but heterosexual relationship arc with Kitsarea Doomseeker, who has goals of her own in terms of opposing the Republic, and her own story. Kitsarea, in particular, is the most fully-formed of the excellent set of secondary characters that the author uses to populate and draw a skein of relationships around Maya and Gyre alike.

One nice piece of worldbuilding in character arcs of the novel is the idea of cognomen, epithets. While in the Twilight Order that is a formalized process  complete with historically important ones (and Maya seeking to get one is a strand in the novel), even Gyre, in the end is granted one. It’s a strand of an idea in Epic fantasy going back to Tolkien that has not gotten that much play, and I am pleased to see how it works in the context of the author’s character development and worldbuilding.

The action beats of the novel are top notch, and where it really comes together. As rich as Maya and Gyre’s stories are, and as textured and interesting the world that the author presents us, the novel really hits all on all of the cylinders in its set piece action sequences. These can be short sharp shocks, such as the inciting incident at the beginning of the novel that ultimately sets Maya and Gyre into opposing paths in life, or they can be longer set pieces like Maya taking on plaguespawn, or Gyre dealing with local constabulary in the context of a heist. With Mays’s use of deiat and Gyre’s use of alchemical creations, his skill and luck, there is a pleasing variety to the action sequences. We get to see the strengths, weaknesses and abilities of the characters and see when their efforts flow, and when they are ineffective to a situation. Thus, the action sequences lean into that worldbuilding and character development, letting them do double and triple duty. For readers who read for action sequences, this is a way to sneak in the vegetables of character development and worldbuilding; conversely those who really key in on character can get that in a matrix other than characters talking or acting with lower stakes.

Ashes of the Sun is a fully enriching and immersive start to a new series. Given the author’s strengths in worldbuilding and character developments across series, I think that this is the best start to a series that the author has come up with, yet, and I have hopes and confidence that the series will continue from strength to strength. More, please.

Bonuses: +1 for a strong brother and sister pair of protagonists with well developed character arcs; +1 for intensely layered worldbuilding, from cities, to culture, to magic; +1 for excellently depicted action sequences

Penalties: -1 for a slightly unsatisfactory denouement

POSTED BY: Paul Weimer. Ubiquitous in Shadow, but I’m just this guy, you know?@princejvstin.