Mexican Gothic asks for your patience and rewards you with gut-punches. 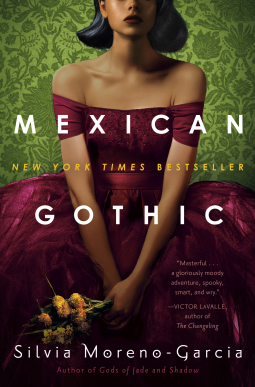 Mexican Gothic is a serpent of a novel that slithers through its proceedings. It takes it’s time as it moves with a predatory glint in its eye, looking like it’s ready to strike until it doesn’t, and you’re left with paralyzing dread, waiting for the attack to finally come. And it sloughs its skin again and again, continuously giving you a new outlook of what it looks like as you wonder when it’s finally going to stop and you can see its eventual form. It’s a slow burn with a petrifying veneer covering something even more terrifying.

The novel begins with protagonist Noemi Taboada, a young socialite who receives a distressing message from her cousin, Catalina, in which she speaks of being haunted by preternatural forces. Concerned for her mental health, Noemi travels to High Place - the quintessentially Gothic abode that Catalina moved into after marrying Virgil – to find out what is going on.

But High Place domiciles more than just Virgil and Catalina. Almost all of the members of Virgil’s family – the Doyles– live within. There’s Francis, Virgil’s softhearted, sensitive brother—Florence, the older, stern, and no-nonsense cousin—and Howard, the invalid, quiet, near-putrefying uncle. There’s an ineffable sense of connection between the family that feels stronger than a familial bond, but hard to put your finger on what exactly that is until later reveals. And moving in an out of the story unobtrusively are the compliant, one-dimensional servants whose lack of personality adds to the foreboding atmosphere.

Atmosphere is something Mexican Gothic relies on during its slow build, and Silvia Moreno-Garcia incorporates a familiar dread endemic to the genre, while also deviating away from its dreary trappings and static moments in which the novel could be aimlessly going around in circles. While Mexican Gothic may be the antithesis of an action-packed thriller, the moments in which it moves at a slow pace are infused with dynamic dread. Some Gothic novels tread water in a placid lake, while Mexican Gothic treads water in a stormy sea with sharks and piranhas circling around you, as your heart races and sweat beads.

Another horror trope that it uses skillfully are dream sequences. A lot of horror novels use dream sequences to pepper the story with shocking imagery that bears no import to the themes or plot. But every single dream sequence in Mexican Gothic either foreshadows or fills in information for the story. Even a couple dream sequences that may seem pointless at first will reveal itself to cleverly hint at or build on the secrets of the novel.

Covering a story in a location like High Place where often mist envelops the area, robbing it of vivacity, is a liability to overfilling your story with dreariness. But Mexican Gothic’s rich color palette comes more from the characters than the setting. Each character keeps the story alive, whether it be through endearing sensitivity, biting and witty remarks, or full-forced malevolence. Every major character is fully-drawn and distinctive as they bounce off each other in ways that will make you vacillate from feeling sympathy to distrust to dread for almost all of them.

Images of an ouroboros eating its own tail is a motif in Mexican Gothic. Family figuratively eat each other in this novel—over-relying on each other to a degree that breaches conventional boundaries. Characters kind of eat other in ferocious ways, as they attack in the confines of High Place—like an ouroboros has circled around them, trapping them, and they’re forced to tolerate each other in a confined, irritating place. But Mexican Gothic offers shreds of hope that when you’re confined, feeling unable to escape your situation, there are morsels of good and handholds to pull you out of there. Mexican Gothic may slough off its skin constantly, like a serpent, but through portraying fully-formed humanity,  it doesn’t reject the idea that its final skin will look less dreary and hopeless as the setting of a Gothic novel.

Bonuses: +1 For having some of the most well-written sentences I’ve read this year.

+1 For having crippling (in the best horror-like way) character development and emotional complexity.

Negatives: -1 It’s not quite as scary as it could be.