The second in the Imperials series puts both of the protagonists - the Heir to the Empire Mercedes, and lowborn would-be officer Tracy - through changes as they explore and struggle through their post High Ground space naval careers. 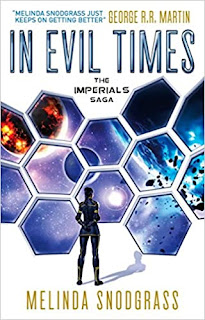 Thracius "Tracy" Belmanor has graduated from The High Ground and helped foil a plot. His reward is to get a ship posting, but not at the full rank he deserves, because that would disturb the social order for a lowborn person like himself to have it. Class and social prejudice plague him as he tries to make his way in the Imperial Navy, and finally come to blows when his sense of honor, justice and right are tested time and again by the realities of the Empire and what it is doing. And the feelings Tracy had for Mercedes, the unattainable Heir to the Empire, in the High Ground? Those have to be locked in a box, right?

In the meantime, Mercedes, the Infanta, has problems of her own. Her unprecedented attendance at The High Ground as a female cadet, and graduating, has led her to a posting on a ship. Even as she strives in her first postings, Mercedes has to juggle her career, her desire to prove herself in a military capacity so as to bolster her position as heir, the desires of her husband, Boho, and a growing problem within the Empire. The feelings for Tracy that she felt in the High Ground? Those have to be locked in a box, right?

These two stories twist, connect and intertwine in In Evil Times, sequel to The High Ground, by Melinda Snodgrass.

The world that Snodgrass creates continues to fascinate from the first novel, especially since we expand from the pressure cooker of the High Ground space station to see the Empire, on the ground, as it were, as well as in the depths of space. We get slices of society all around, from Mercedes’ center of Imperial power, to the very humble existence that Tracy’s father as a tailor has, to the life of military officers. We get a painted portrait of what this stratified, socially conscious world is like and how people fit into that system, resist that system and find themselves in trouble for opposing that system. We also get a better sense of how aliens, an oppressed stratum of society, fit and struggle in a human dominated Solar League. Aliens are very much third class citizens, and the consequences of that are explored in the book both from Tracy and Mercedes’ perspectives.

The plotting and action sequences of the book are another highlight of the book. There is significantly less action than in the previous novel since the rigors of an academy are replaced with a lot of time traveling to places on ships. There are some excellent set pieces, including a stand off on an alien planet, and a “closed room” firefight that show the author’s well honed skills at blocking and presenting these sequences in an entertaining and vivid way. More so, like the first novel, plotting the strands of the character, their careers, the events of the novel, is also top notch for the most part--although a strange and large time jump mid sequence did feel a bit discordant and took me briefly out of the story.

The heart of the book though are these two characters, Mercedes and Tracy. Melinda doesn’t make it easy for either of them in the social striations, strictions and structures they have to survive in. Lowborn commoner and the Heir to the Empire CAN’T work as a pairing, a realization  that is reinforced time and again in the narrative, and yet that relationship that cannot, should not work, and doesn’t come to fruition is an undercurrent and underpinning of a major strand of both of their characters. The countervailing strand, of duty, plays on both characters and leads them down what may well be opposing paths. The reverses and struggles, aspirations and hopes of both characters come through in all of their advances and setbacks, and the author writes characters to care about, to cheer on and to suffer their travails with. Both are vividly realized. The minor characters that the book details also come across as full blooded and dimensionally realized characters. I particularly felt for

The novel’s themes are even stronger than the previous mentioned worldbuilding, character, plotting and action sequences. We got a strong dose of the class differences and (in this day and age importantly in our own world) the class stratification of the society of the FFH, a society that makes in aristocratic terms a mirror to our own society’s issues and problems. This allows the author to explore issues of immigration, class conflict, social hierarchies and the difficulties of those who would challenge such systems, both those low and high in the social structure. It is these class conflicts and how the character, the internal strength, and weaknesses, of the characters really play out. The set-piece meeting of Tracy and Mercedes again at bringing a lost colony world into the Empire really brings this all home. Above and beyond the action beats, and the worldbuilding of the colony so at odds with the Empire itself, it is what both characters do there that forges them into their subsequent threads, and fateful decisions made by both Mercedes and Tracy alike. The master plotting from the author aligns the themes of the book and the internal character arcs of both Tracy and Mercedes, making for a rich reading experience.

One thing I have to say, though, and readers might shy away from the book and series thereby, is that this is an unpleasant social structure and universe in many ways, and Snodgrass is not shy about exploring that, to a fault. Xenophobia, violence and sexism (especially the role of women) are not great in the Solar League, and the novel is really up front about it, and hits the theme time and again. The aforementioned set piece on bringing a lost colony world into the Empire is deeply unpleasant on a number of levels given current politics and readers who don’t want contemporary politics reflected so strongly in their fiction may be turned off thereby.

Like most books mid-series, In Evil Times really isn’t designed to stand alone. While this book does, with the Lost Colony world, provide an opportunity for the author to explain a lot of the background that had to be inferred or taken from context in The High Ground (providing detail on how the Empire *got* that way), this really isn’t the place to start the story of these two characters. The book does summarize and call back to the first novel, especially in character beats and emotional arcs, but its a poor substitute, I think, for actually reading the first book, unless you really wanted to skip the academy setting in favor of these characters on space ships, making their way in interstellar actions, adventures and changes. It took me a while to get to this book following the High Ground, but I do not intend to make that mistake again to pick up the next book in the Imperials series. One nit: These books never seem to have had e-book versions, so I will have to rely on audio, as I did the first two books, in order to do so.

Bonuses: +1  strong pair of viewpoint characters with very strong character arcs, characters strong enough to cheer, cringe and root for.
+1 for excellent use of theme to explore contemporary social hierarchies in the form of her future aristocratic society.

Penalties: -1  Some of the themes of the book are almost too much in one’s face, especially in the Lost Colony world set piece.

Nerd Coefficient:  7/10  an enjoyable experience, but not without its flaws