6 books with (Half of) Kit Rocha 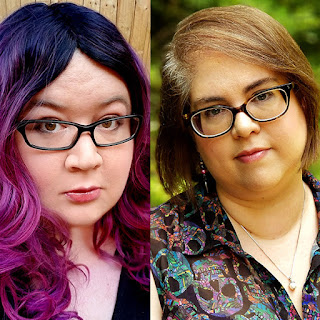 Kit Rocha is the pseudonym for co-writing team Donna Herren and Bree Bridges. After penning dozens of paranormal novels, novellas and stories as Moira Rogers, they branched out into gritty, sexy dystopian romance.

Today, Bree (@mostlybree) tells us about her Six Books.

Right now, I'm tearing my way through an advance copy of Alyssa Cole's upcoming gentrification thriller When No One Is Watching. Alyssa Cole has a habit of writing terrifyingly prescient books (if you like near-futuristic and want to be convinced we need to break up tech corporations yesterday, check out The A.I. Who Loved Me), but this one is something special. It comes out on September 1st and everyone should be pre-ordering it yesterday!

Well, I suppose I kind of answered that but that's okay, I have more! The second book in Milla Vane's A Gathering of Dragons series [A Touch of Stone and Snow]  comes out in July, and I'm so, so excited about it. And I'm really looking forward to Tasha Suri's new trilogy that kicks off with The Jasmine Throne, as she was one of my favorite new-to-me author discoveries of 2019.

I also read the deal announcement for Hannah Whitten's debut For the Wolf and screamed in my office, so I want that one a whole lot! Someone involved needs to call me!

I am a massive rereader. There are books I read every year! (Melanie Rawn and Anne Bishop have both had that place of honor for two decades.) Right now I've been meandering my way through the Wheel of Time series again because I'm really excited about the upcoming TV show! I also have a discord chat server where we discuss books and they've all been talking about Nalini Singh lately, which means I'm about to go pick up some of her Psy/Changeling books and read them for the mumblemumble-th time.


4. How about a book you’ve changed your mind about – either positively or negatively?

I have a very fraught relationship with a lot of my childhood favorites. I'll always love Pern, but the original series is a mess of terrible consent and foundation level misogyny. (Among other things.) The same is true of a lot of my favorite books from my teens. So it's not so much that I change my mind, as that I take the things I love about them with me while acknowledging the parts that I wish weren't there.

I'm going to go with one that might surprise people who know me, and say Z for Zachariah. For those who aren't familiar with the book (which is, I should add, very unlike the 2015 movie adaptation) it's the story of a girl left alone after an apocalypse, and her struggle to survive on her own...and then to survive not on her own.

I think that's the book that made me fascinated with dystopian and post-apocalyptic fiction. Over the years I'd read a lot of it--some great, some terrible--but that was the original spark. And wrestling with the question of what kind of world we'd build if we had to start from scratch is a lot of my current writing obsession.

My book is, coincidentally, about the apocalypse! Ha!

Though that's not entirely true. While the book takes place after an apocalyptic event (45 years after one, in fact) the book itself is about friendship, and community, and hope. It may sound a bit odd, but my favorite part of writing about a world where all rules and systems have been swept away is imagining that some people (the people who the rules and systems weren't doing much for) would do it better and smarter this time.

So I wrote a book about a couple of ladies who happen to have superpowers thanks to unregulated genetic experimentation, and they're using those superpowers to build a library.