Jaime Lee Moyer’s Divine Heretic provides us with a story of a Joan of Arc who, while not being strictly true to the known historical facts, nevertheless brings us a fantastical story of a unique character in European history. 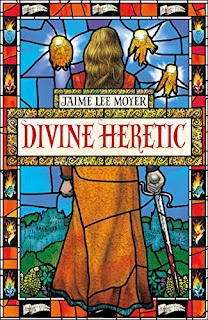 On May 30, 1431, a nineteen year old young woman was burned at the stake in Rouen. The capital charge: crossdressing as a man. The other charge, heresy, was not a capital charge save for a repeat offense. The nineteen year old had changed the flow of history with her support of the Dauphin,  Charles VII of France, helping him take key cities, and seeing him crowned at Reims. It is no exaggeration that without her and her claims of divine aid for the Dauphin, there would be no France, today.

The young woman was, of course,  Joan of Arc. In Jaime Lee Moyer’s Divine Heretic, we get to see a very different, and very personally focused look at her story.

The novel establishes that this is going to be a different, and an SFFnal take on Joan of Arc, early on in the novel. In our real world, Joan claimed that the Archangel Michael, Saint Catherine and Saint Margaret in visions spurred her to support the Dauphin  In Divine Heretic, in the vein of her previous Maid Marian novel Brightfall, the author recasts these visitations are recast as being not angels, but rather something much more akin to Fae Princelings. Her Joan is quite quickly aware that the visitors are not from God, and so the novel sets up a tension between these three entities who very definitely want to manipulate Joan to do as she did in our own history--make her way to the Dauphin and help reclaim France, and Joan’s own desires for autonomy and freedom.

Thus, unlike the uncompromisingly outward face of the divinely inspired and bolstered Joan of Arc that we know from history, this is a Joan that is extremely reluctant to follow the commands of the “divine visitations”. The story of the novel is the tension between Joan’s resistance to those commands, what the trio of beings do to try and influence history through her, and Joan herself growing to maturity, and finding what she wants, what she needs, what she wants to stand for. Joan of Arc is a symbol of female power, autonomy, and strength, and in the novel, the author sets about to show how very human is, and yet show the core of strength that would be recognized far and wide.

So much of this story takes place before Joan ever meets the Royal Court and becomes the Joan of arc that we know. She’s a peasant girl, growing up in a devastated French village that sees periodic raids by the English. This Joan’s hatred of the English is not divinely mandated or inculcated, she doesn’t need angels or anyone else to have a justified hatred of the English. Where a lot of the novel’s strength lies is in giving a grounded and unvarnished look at what life, death war, and injury is like in 15th century France wracked and wrecked by the Hundred Years War. It’s a hardscrabble sort of life and a depiction of a life that in a secondary world fantasy would be lauded as being part of the grimdark tradition. The author’s previously demonstrated skill at evocating a historical time and place serves her very well here. She pulls no punches, characters injured or hurt take agonizing amounts of time to heal up, helping to further intensify the narrow and focused first person point of view on Joan and what she is going through. This is heightened by the trio of entities, who take action to make sure that Joan, as unwilling as she is, will go to her ordained destiny.

Readers who are coming to the novel who want the Joan of Arc that we know from history are, quite frankly, going to be disappointed in Divine Heretic and I would strongly counsel that the novel is not going to suit them very well. It’s very difficult, I think, to humanize a historical figure that quite literally has become a saint (Joan was retried 35 years after her death, and found innocent, and her stature, legend and myth grew until her canonization in 1920). There is a lot we just don’t know about her and the nature of her visions. Admittedly, even though the portrayal here is Joan's growth into a young woman, much of which we do not know, and is free for the author’s invention, when the historical events that we know of Joan and the events of the novel line up, this Joan is definitely and definitively different than what we see from the historical records. This is not a Joan who wrote harrying letters to the Hussites, for example. This is a pious Joan but not one of uncompromising idiosyncratic orthodoxy. The author uses myth and legend as the sources of Joan’s power and giving her the ability to inspire and bolster the French cause. And in the process, makes her invariably human, complicated, well rounded, and readable as a character.

I personally prefer the headcanon that Divine Heretic is an alternate historical take on Joan of Arc, rather than the Joan of Arc that we know. In that way and in my mind, that reconciles the sometimes vast differences of invention that the author brings to the character, and also some of the sequence of historical events. That said, it is a good and vivid alternative historical take on Joan of Arc while providing a view on her world and times that definitely applies to our own world. If novels really are about our life and times no matter when they are set, Joan’s story of a young woman striving for autonomy, strength and freedom is a message and story that resonates in 2020 as much as 1430.

Bonuses: +1 Well depicted and well described sense of place for 15th century France, we get a good sense of Joan’s world and upbringing as seen by the author. +1 for a complicated and interesting unique look at Joan of Arc as a character.

Penalties: -2 This is not the historical Joan of Arc you may be expecting from this novel

Nerd Coefficient: 7/10 :an enjoyable experience, but not without its flaws