This is usually where I write an introduction, but after several attempts, it turns out I'm not in a very introduction mood at the time of writing this. Instead of worrying about that, let's just check out some stories! 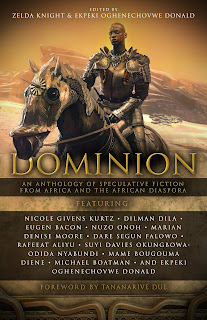 I backed the Dominion anthology on Kickstarter when it was originally announced, thanks to its impressive line-up of authors from Africa and the African disapora, and the final product did not disappoint. Most of the stories here are on the long side of short and it means there's lots of meaty worldbuilding and character to sink into in each one. Many of those stories go to dark places - I'd like to see future volumes of this series, if it becomes one, make use of content warnings as well as the one-line descriptions summarising each story at the start of the anthology (which is a great idea!) The anthology had me hooked from its second story, "Red_Bati" by Dilman Dila, which deals with the life of a former service AI now being used as cheap space labour as it plans to escape its own decommissioning and find a way to live beyond the confines of how humans deem it useful. Eugen Bacon's "A Maji Maji Chronicle", one of the most lusciously written of the anthology, offers a story of power and magic in a world full of disjointed snippets of recognisable events. Then there's the powerful, if very troubling, horror of "The Unclean" (which definitely needs those content warnings), in which a desperate woman trapped in an abusive family and haunted by her child tries to recover him through a terrible act of magic.

And so it continues, through mythic tales of gods and humans and ill-advised magics, from the near-future corporate dystopia of "The Satellite Charmer" by Mame Bougouma Diene to the creeping horror of small-town Midwest racism in "Thresher of Men". Closing out the collection is one of my favourites: "Ife-Iyoku, The Tale of Imadeyunuagbon" by Ekpeki Oghenochovwe Donald, a story about self-actualisation in a village struggling to survive in a hostile post-apocalyptic world by upholding the maintenance of magical traditions and gender roles despite the harm they cause the protagonists. While some of the stories and styles here clicked with me more than others, there's undoubtedly an impressive range of talent in this collection, and it's the variety in the worlds themselves and the different stories they make possible which really make the Dominion Anthology stand out. 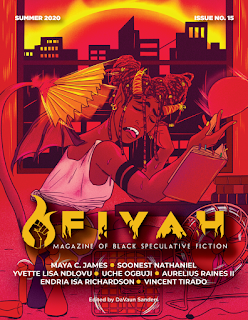 My magazine folder tells me that I've somehow missed reading an issue of FIYAH at the start of the year, which - coupled with how late I'm reading this latest issue - is the best indication yet that this year has not been kind to my poor addled brain, because new FIYAH is usually one of the highlights of each quarter. Still, these are good stories whenever you get to them. It's an unthemed issue, but with a strong running theme of death and memory. "Your Name is Oblivia" by Vincent Tirado was a standout for me: a woman working at a bar which serves memories - and sometimes requires them as payment - becomes rather attached to her customers, and in doing so starts to question some of the gaps in her own life, and the circumstances that led her to be there in the first place. The mystery element isn't particularly mind-blowing, but that's not where the heart of the story lies anyway; what made this one work for me was the oppressive, sleazy atmosphere of the bar where Oblivia works, and the tentatively sweet relationship she nevertheless manages to form with Donovan, who Tirado manages to make into an intriguing, plausibly alluring person with very little within the wider setting to make that reading possible. I also highly enjoyed "Red Cloth, White Giraffe" by Yvette Lisa Ndilovu, in which a woman watches her own funeral and the behaviour of the family she has left behind, and contemplates what she's going to do after her own death; I highly enjoyed the streak of pragmatism in the protagonist even as she deals with the unfairness of her situation and the relentless structural misogyny from both the living and the afterlife itself. And "The Last Testament", by Aurelius Raines II, features a young woman tech genius who I could happily have spent more time with, and the robot built to replace her dead brother. As the story twists between the poignant moments between Ada and Zahir, the not-siblings, to the circumstances that led to their current situation and Ada's plans for her future, it combines questions of justice with moments of genuine love and connection between the two that makes its ultimate conclusion all the more heartbreaking. Rounding off the issue (the longest story in it, in fact) is the weird but satisfying "The Black Menagerie" by Endria Isa Richardson - a story I have less to say about than the others, but nevertheless well worth checking out. 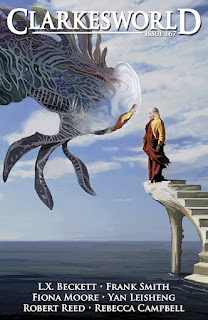 It's been a while since I've reviewed a Clarkesworld, and honestly I started reading this one because I thought it had Bogi Takács' new novella in it, but I was a month out. But I finished what I started, and for my trouble I got a, uh, fairly mixed bag of stories for my tastes, including a couple which, despite reading less a week ago at the time of writing, I am... struggling to remember anything about at all. What is memorable for me in here, though, are some pretty dark stories. The Lori by Fiona Moore tells the story of Cooper, once the driver of a sentient tank, who returns to the foreign country where it went missing to try and track it down and retake control. As Cooper gets close to the tank, however, he starts to unravel the pattern of seemingly random targeting the "Lori" is inflicting on the people around it, and while the ultimate conclusion has a touch of sweetness to it, it's a moral that's wrapped up in a lot of senseless death among people that both Cooper and the Lori are alienated from. "The Plague" by Yan Leisheng is another dark, dark story (with CW: pandemic, in case you need it, as well as body horror), with a protagonist who is one of the few people who hasn't been infected by a plague that slowly turns people to silicon, and who is tasked with burning the bodies of the infected, a process which is described in great, unpleasant detail. The story of the protagonist learning about the plague, and about what it does, is intriguing, though the direction the narrative takes doesn't do much with the more moral questions about the transformation of life that the speculative element raises. Still, the imagery here is excellently grim, and the ending in particular is likely to stay with me for some time.

Also on the "grim but great" spectrum, "The Immolation of Kev Magee" by L.X. Beckett is a thriller-esque story about Breeze, and the small family and increasingly strange events that start coalescing around them as they try to survive in a future world ravaged by climate change and terrible capitalism. The combination of fragile found family (though it's not a happy ending on that front) and gritty dystopia kept me hooked on this one, and the way it turns its difficult ending into one of hope, purely because of the importance of survival in the world it creates, is heartbreaking and fabulous. 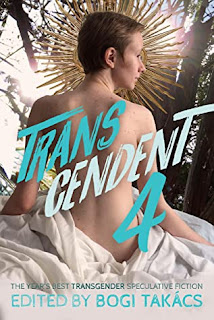 There's a lot I could highlight in this collection which collects the best science fiction and fantasy with trans themes of 2018. But among its gems, I was particularly delighted by a pair of stories which dealt with small, quiet moments in the lives of their protagonists. "Sandals full of Rainwater" by A.E. Prevost, has its protagonist finds love and connection with a family from another culture, all of them immigrants to a place where finding work and surviving is challenging enough: it's a gorgeous story of overcoming cultural barriers (the protagonist's culture has no concept of gender, and they find the array of pronouns and genders in their new family's language bewildering and occasionally frustrating) and finding belonging and self-worth in a situation that doesn't have to be world-ending to be difficult. Then there's "Ghosts" by Blue Neusifter which deals with the world's kindest haunting, and a protagonist who offered messages of hope and encouragement in the magnets on their fridge. In an anthology that's full of talent, those were the two stories that nourished my own soul the most, and I'll definitely be looking out for more work by both of those authors.