Congratulations to R.F. Kuang, for her Astounding Award win, at the Hugo Awards last weekend.  I highly recommend watching her powerful acceptance speech, in which she talks about the stark realities of how new authors and "bright new talents" are "welcomed" into the genre.

The Burning God,  the third book in Kuang's Poppy War series, will be available this November,  which means you have plenty of time to read the first two books in the series, The Poppy War, and The Dragon Republic. The series follows an orphan named Rin, who earns her place in an elite military academy. When a brutal war lands on their doorstep, the students realize how ill prepared they are to make the decisions necessary in a war. Sure, any soldier can fight, but it takes a different kind of strength to face collective decisions and collective trauma.  When interviewed at RT Book Reviews about the first book in the series, she said of The Poppy War: "I chose to write a fantasy reinterpretation of China's twentieth century, because that was the kind of story I wasn't finding on bookshelves".

For those of you who are caught up on the series and eagerly awaiting The Burning God, you can look forward to untrustworthy political allies, Rin's return to her roots, and the difference between who wields the power versus where the power actually lies.  This last installment in the trilogy promises to be an emotionally brutal experience for readers. The gorgeous cover art for all three books was done by the incomparable JungShan Chang, whose ink artwork could easily inspire a thousand more novels.

Kuang took the time to answer my questions about her writing process,  the pressure of writing this last installment, her future projects,  her interest in diaspora literature and translation studies, and more. You can learn more about Kuang by visiting her website RFKuang.com  or following her on twitter, where she is @kuangrf.  She has been nominated for the Nebula, the Locus, and the World Fantasy award, has won the Astounding Award, and The Poppy War won the Crawford Award and the Compton Crook Award for Best First Novel.

spoiler alert:  While this interview does not contain any spoilers, I can not guarantee the same for the articles and websites I have provided links to.

(this interview was conducted prior to her Astounding win,  which is why mention of the award and the acceptance speech is absent from our conversation)

NOAF: When you first started outlining and writing The Poppy War, did you know how the trilogy would end? 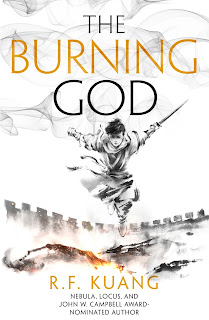 R.F. Kuang: Yes, I knew the ending before I knew the beginning. I always come up with the ending first. I'm a pantser rather than a plotter, but I can't get started on a story unless I know where it's all going; I need to give some direction to the story engine. I've been picturing the final scene in my mind for years and years, so it's a relief to finally get it down on paper. So yes, I actually always conceived of The Poppy War as just the prequel material to the stuff I really wanted to write.

NOAF: You wrote The Poppy War when you were nineteen. How has your writing style, and your writing goals, changed since then, if at all?

R.F.K: Probably the most positive change is that I don't sound like a teenager anymore. I think my writing has matured simply because I've matured. I've (hopefully) gotten rid of a lot of the tell-tale younger writer quirks. I've worked very hard at my craft through a combinations of workshops (I can't recommend Odyssey enough), craft books (have currently acquired Wonderbook, edited by Jeff VanderMeer under enthusiastic recommendations), and reading everything I can get my hands on. I'd like to think my prose has gotten sharper and leaner in the past five years.

My writing goals haven’t changed–all I want is to write great books that lots of people read. But I have found myself moving away from epic fantasy. The next project, set in Victorian Oxford, is more of an alternate history, and the project after that will likely be a contemporary thriller. Maybe I'll come back to fantasy at this point; I'm just getting a bit tired of it at this point in my career. I'm ready to stretch my wings and see what else I can do.

NOAF: You mentioned in an interview you did at Tor.com that the "whole trilogy has been about cycles of violence, abuse, and responses to trauma".  Was writing this trilogy emotionally taxing for you?

NOAF: Across the whole series, who has been your favorite character to write?

R.F.K: This answer changes every time I give it. I've become so fond of all my main characters' voices; it feels like they've really become a part of me. In The Burning God, I think I had the most fun writing Master Jiang's scenes. Some of them were extremely fraught and complicated, but others were so lighthearted and funny. I think he's the character with the most radically different sides (literally), so balancing those shifts in personality was challenging in a very fun way. 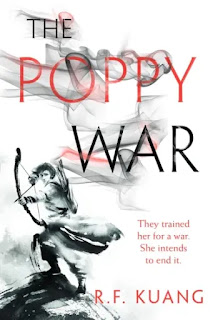 R.F.K.: The last scene was the hardest to write by far. Aside from the obvious emotional heft, there was just a lot of pressure. This is what I've been building up to for three years, so of course I wanted to get it absolutely right. It's also a rather complicated scene – a lot of emotions shift in a short period of time, and the characters have to make incredibly difficult decisions – so it took a lot of tries to get right on a technical, craft level. Once I was structurally satisfied with it, I still spent months poring over every last sentence, particularly the dialogue. It was difficult to write and difficult to let it go.

R.F.K.: Well, Contemporary Chinese Studies is just the name of the program. I focus on modern Chinese literature. Right now, I'm working on a thesis on Chinese sf novels by Liu Cixin and Chen Qiufan, focusing on the ways they deal with the anxieties about colonial modernity. I don't know if sf will remain my focus when I transition to doing my PhD, but generally I'm interested in diaspora literature, translation studies, and representations of war and violence.

NOAF: Thank you so much for doing this interview, and congratulations again on your Astounding Award!