After a grim start, The Tyrant Baru Cormorant finally restores some confidence to its troubled hero and her Empire-destroying schemes 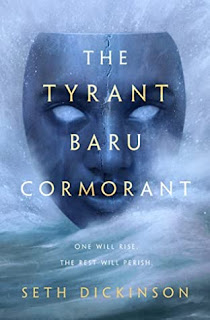 Content Note: This review contains major spoilers for the end of The Traitor Baru Cormorant, the first book in the series, and anyone picking that book up should be aware that it contains heavy themes of homophobia and queer misery. The Tyrant Baru Cormorant contains a plague as a major plot point, and also contains other elements of torture, body horror and gore that are discussed below.

Baru Cormorant is back for round three! In The Tyrant Baru Cormorant (which, in-keeping with the rest of this series' inexplicable name shortenings, is being published as "The Tyrant" in the UK) everyone's favourite provincial savant returns for another round of high-stakes political drama against the empire of Falcrest: the empire which colonised her island, killed one of her fathers and tried to cut her off from her own culture as a child, and also the empire which now counts her as among its most elite operatives. The first book in the series captured my heart and then broke it into a million pieces, and while I don't think I'm the same reader as I was five years ago, I still consider new releases in this series to be a significant event, and I'm especially glad we haven't had to wait too long between the previous book and this one.

When we left Baru at the end of The Monster Baru Cormorant, she had been captured by the Cancrioth, the secretive cancer-worshipping society which had been secretly influencing the Oriati Mbo confederacy and which could provide a political opening for Falcrest to conquer that society. It's safe to say that Baru wasn't in a great place for any of that book, as she steps up into her new position in the Empire while coming to terms with the death of her lover Tain Hu and the blame she carries for it, having watched the execution and refused to stop it and allow the Empire to use Hu as a hostage against her. The fight that led to Hu's capture and the end of the rebellion she led also gave Baru a major head injury which has led to lasting hemineglect. These consequences reverberate throughout Monster, and the while the ending of the book offers some interesting context as to how the hemineglect, in particular, has influenced her actions, it leaves any emotional healing from these events largely unrealised. Thus, it's a still rather static Baru who returns for Tyrant's first act: Falcrest's political situation has changed around her, but not much has changed from the opening of the previous book for her.

The first third of Tyrant deals directly with the fallout of her capture by the Cancrioth, and the introduction of their different leaders (all of whom carry a different hereditary cancer which apparently bestows ancestral memory as well as... y'know, cancer) is combined with a ton of body horror and outright torture. Baru survives their tender loving ministrations, only to become caught back up in the different factions of Falcrest and Aurdwynn (the country from which Tain Hu hails, and where Baru started her illustrious career) who have been hunting her down. The switch from the Cancrioth's visceral biological horrors to Falcrests ultra-sterile unpleasantness is effective at underscoring their respective awfulness and how tenuous Baru's position is between them, but it's a lot to get through, especially as there's no clear escape route or game plan for what might happen once Baru is out of immediate danger.

What a relief, then, that Dickinson has this all in hand. Once Tyrant gets off the Cancrioth ship, Baru's story gets a lot zippier, with certain spoilery but very precious events helping her regain faith in her abilities, enabling her plans and her scheming to return in force. For me, this was an enormously refreshing change:  while the grief and stress of Baru's recent past never leaves her, her breakthrough lets her reconnect with some of the more engaging aspects of her personality (including the youthful arrogance!) and start rebuilding relationships with those around her, establishing trust with some rather unexpected players to start moving things along. In renewing this confidence, Dickinson makes it a lot easier to get behind the twisty and mysterious schemes that drive Tyrant forward - and that's trust we very much need, as the plot navigates the complex political situation which the first two books have set up. On that front, it also helps that Aurdwynn and Taranoke are now firmly back into the picture alongside the Oriati Mbo, though unfortunately, the sections involving the Mbo still feel like the weakest parts of this story. It's just hard to invest in the characters here, particularly when the main action of this thread takes place in the form of flashbacks to the characters' past, compared to other, more immediately pressing, plot strands. There are other diversions too, notably to the small island nation of Kypranaoke, a former Falcrest colony now left to its own devices with a deeply dysfunctional post-colonisation political system and an experimental infection of a new deadly disease called the Kettling. A lot of the time, though, Tyrant is a homecoming for many of its characters, particularly Baru herself, and it feels the stronger for it.

The other sea change here, which began in Monster but is even more notable now, is Baru's increasing acceptance of her own queerness and her ability to be open with a wider range of characters without fear of retribution from the enforced "hygiene" of Falcrest itself. Although Baru does pursue sexual relationships in Monster after the death of Tain Hu, the discussion of these relationships and her categorisation of them starts to change significantly here, as she starts to recognise which connections are offering her positive connection, which are not, and which might but come with emotional and moral baggage that's higher than she's willing to pay. The introduction of certain characters with some loud, teasing but supportive opinions on Baru's entanglements is also a refreshing change (and I wish I could tell you who they are, but suffice it to say you will probably be delighted). While Tyrant recognises that Baru is still the product of conditioning, and her tendency to self-sabotage is far from gone, there's still welcome undertones of hope and levity piercing through the misery. There's still plenty of setbacks and horror, and some of those hopeful moments exist in the narrative only to make subsequent punches land a bit harder, but having ups with the downs nevertheless makes a huge difference in the reading experience, allowing us to hope alongside Baru that a victory against this all-powerful, overwhelming foe just might be possible.

The Traitor Baru Cormorant was a brutal gem of a book, one which pulled out all the stops (particularly the one labelled "queer misery") to tell its story of a young woman trying to go up against the empire which has destroyed her homeland, outlawed her sexuality and culture, and is now destroying the land of the woman she loves. Monster, its sequel, picks up where the first book leaves off, but in widening the scope of Traitor's story it becomes a rather different experience, one without much space to advance Baru's emotional state on the path towards healing. Tyrant begins as more of the same, but once it comes around to making good on its young hero's growth, it won back any trust I might have lost over the previous volume-and-a-bit. I understand there is one more volume to go before Baru's journey is done, and although Tyrant ends on a positive enough note for the characters that it doesn't strictly feel like it needs one, if it comes to it then I am ready to take down the empire with this terrible young woman, once and for all.

Bonuses: +1 A long awaited payoff in terms of character healing and growth; +1 New and returning settings and characters provide a strong, hopeful focus

Penalties: -1 The Oriati Mbo storyline still doesn't spark along with the rest; -1 The first third of the book is exhaustingly bleak and brutal

POSTED BY: Adri, Nerds of a Feather co-editor, is a semi-aquatic migratory mammal most often found in the UK. She has many opinions about SFF books, and is also partial to gaming, baking, interacting with dogs, and Asian-style karaoke. Find her on Twitter at @adrijjy.
Reference: Dickinson, Seth. The Tyrant Baru Cormorant [Tor, 2020]