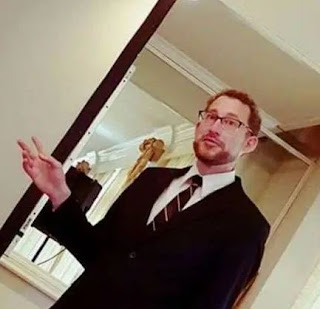 You very likely know Gideon Marcus from his Hugo nominated fanzine Galactic Journey, his work as a space historian, and his educational lectures, but did you know he also writes fiction?  His short fiction appears in the anthology Tales of Alternate Earths 2, and his debut YA novel, Kitra, is available now.

Nineteen-year-old Kitra dreams of traveling to the stars like her mother, and she jumps at the chance to fly into space on her own ship.  A diverse crew of nerdy young adults on an old junked Navy ship,  what could possibly go wrong? Well. . .  everything.  Before they know it,  they are stranded. No fuel, no way home, and no one coming to rescue them.  Did I mention Kitra's ex-girlfriend is among the crew?  Talk about awkward!

Kitra is a story of perseverance in the face of fear and uncertainty, and that we only get through times like these by helping each other.   Uplifting and positive,  this novel speaks to all ages.

Galactic Journey is Gideon's Serling award winning and Hugo nominated web-project. Going back in time 55 years to bring today's readers news from the past, the site features reviews of published short stories and novels, and tons of articles on movies, tv shows, "current" events such as the Space Race, and other interesting things. The neat thing is that everything on the site is written as if it is happening right now. You can also follow Galactic Journey on twitter, @journeygalactic.

Gideon was kind enough to let me ask him all sorts of questions about the novel and Galactic Journey.  In our wide ranging conversation we talk about everything from recent trends in YA fiction to characters writing the story themselves, to the importance of small moments, to the future of Galactic Journey, and more!

NOAF:  Congratulations on your new novel, Kitra! Who is Kitra and why is her story so compelling?

Gideon Marcus: Thanks very much! Kitra is a 19 year old amateur glider pilot with one overriding passion: to go to space. Her mother was an interstellar ambassador, an almost larger than life figure, and when she died, she left behind big (metaphorical) shoes to fill. What makes Kitra special is what can make anyone special: persistence and a determination to seek help in achieving one's goals.

As for what makes her story compelling, I think a story of hope against odds, of ingenuity beating adversity, always resonates. But right now especially, when we're all stuck in various levels of isolation and there's no clear path back to normal, a story about being trapped in a small ship for weeks on end resonates all the more strongly. It's eerily timely and, I'm hoping, inspiring.

NOAF: Sounds like there's a lot of wonderful things happening in this book!  What challenges did you come across, when you were plotting out everything that needed to happen?

GM: Plotwise, I wrote myself into a corner about 65% of the way through the book. I really didn't know how Kitra was going to accomplish the most important thing she needed to do to get home. When you read how she and her crew got through the puzzle, you'll think it was just brilliant foreshadowing . .  . but really, I just sat in my backyard and thought, "What would the characters do?" They quite literally wrote their own solution.

More technically, my biggest challenge was scientific consistency. Kitra is a "young adult" novel, which means it needs to be accessible to everyone age 10 and up. At the same time, there's plenty of Star Wars-style science fantasies out there that play fast and loose with physics. I wanted to write a story that is plausible science fiction while still enjoyable and a quick read. That was the challenge, making sure I kept all the numbers right - how much fuel they had, their food reserves, the mechanics of space travel, etc. It's all invisible to the reader (this is a novel, not a textbook!) but that consistency is important to me. 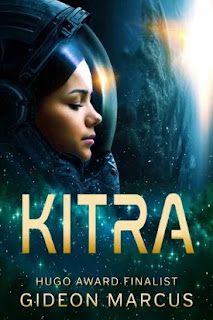 NOAF: What inspired you to write this novel?

GM: Two main reasons. First: I wrote what I wanted to read. Second: No one else was doing it.

I grew up on "classic" science fiction, mostly stuff from the 50s through the 80s. There wasn't a YA genre back then; it was called "juvenile" instead and usually featured young men doing adventurous things among the stars. Back then, space was the final frontier, after all.

For the last twenty years, YA has been dominated by fantasy and dystopia. Don't get me wrong - I enjoyed Harry Potter and The Hunger Games, but it got to the point where everyone was trying to write the next Harry Potter or Hunger Games. Space hasn't gotten any less interesting; science shouldn't be passé; and characters don't need magic or special powers to be extraordinary.

As for why Kitra in particular, in those books I grew up with, there weren't enough (read ANY) young women protagonists . . . except in my beloved L. Frank Baum Oz books. There weren't queer protagonists, rarely persons of color in starring roles. It was something I didn't notice when I was a kid. And that's, of course, the problem. I want young people, and older ones too, to read my book and see a world that looks like theirs, with all the diversity therein.

NOAF: What surprised you the most, while you were writing this novel?

GM: A lot of the book was planned well in advance. I'm not exactly a plotter, but I like to bullet point the pivotal scenes. Some, though, I just sat in front of a blank page with my 1000-words-a-day deadline looming, and pulled a chapter out of . . . hyperspace. :) The snowball fight was one of those.

I didn't plan the situation between Kitra and Marta. In retrospect, it's obvious - two close friends with a romantic history trapped together in an enclosed space - something was bound to happen. Not only does it affect the events in Kitra, it will be important to later books in the series, too.

I think that's the mark of successfully realized characters. They do what they want regardless of what you have planned for them!

NOAF: I hear there is a second novel in the series in the works! Where does Kitra's story go from here?

GM: I'm never certain how much to spoil in these interviews! Kitra's saga definitely doesn't end with the first book, though Kitra wraps up satisfactorily (all of the books in the series will; no one likes a novel that's not a complete story.) By the end of the first book, Kitra and her friends have just been forged into a crew. There's a whole universe to explore, and mind-boggling things to discover. Plus, Kitra will grow as a person, as will those around her. I think that will resonate with readers, too, watching these characters mature over time.

NOAF: In another interview you did, you mentioned that you're "not really about villains". Does Kitra's world not have any bad guys?  What does a world without baddies look like?

GM: What's a "bad guy"? I grew up on superhero comics, and I enjoyed the MCU for a while, but I got tired of the zero sum game. If there were heroes, the rationale went, there had to be equally powerful villains, and they had to fight incessantly. In a dystopian novel, there's the big evil government. In a fantasy, there's the Sauron/Voldemort. I wanted to try something different.

The real world is a complicated place. The "enemy" can be poverty, natural disaster, or closest to home right now, a pandemic. There are definitely selfish, cruel people in this world, but they are almost always the symptom of a problem rather than the source.

My wife once observed that "good writing is the art of making small things matter." Writers have gotten obsessed with toppling Big Bads, or a series of successively tougher "bosses". The scope is always enormous: the world, or the universe . . . maybe even the multiverse. With Kitra, I dialed it back. It's just her and the four friends she feels obligated to help. There is no enemy, just a challenging situation to deal with creatively.

That said, the scope will expand as the series goes on. Will there be trouble? Of course. Politics? To a degree. People who try to hurt Kitra and her crew, sure. But there will never be an arch-nemesis for her to rail against.

NOAF: I'd be a terrible interviewer if I didn't congratulate you on your Hugo nomination for Best Fanzine, Congratulations!  You've been on the Hugo ballot a few times now, how did it feel to get that first nomination? What will winning a Hugo mean for you?

GM: Becoming a Hugo Finalist was literally a life-changer. It happened at the same time as my first professional fiction sales (I've been a nonfiction writer for 15 years) as well as my first educational performances. That was when I realized I could make a go of this writing thing. Two years later, I have a successful publishing company, I'm working with laureled authors, and I'm doing what I love most - telling stories that entertain.

GM: It all began in 1954. That's when my dad started collecting science fiction magazines. He died in 1993 and left me almost a thousand of them. In 2009, I decided I wanted to read them all. To keep me on a regular schedule, I decided to read them once a month "as they came out" with a time-shift of 55 years. In 1958 . . . er . . . 2013, my wife asked me to recommend some of my favorite stories. I decided to write a blog instead, sort of projecting myself into the past to live in the bygone age, day by day. I'm a space historian, and my specialty is the late '50s, so I added articles about the Space Race, too.

Well, you can't immerse yourself in a time, listening to the music, watching the movies, reading the paper, and not have it become part of you. And I kept seeing our modern age reflected in the past. 55 years ago is now, just a little crappier. I found myself excited on the rare occasions I saw a woman's byline in my fiction and started chronicling the (these days largely forgotten) contributions women made to science fiction back then. I got invested in the struggle for civil rights which, even today, is far from complete...and has faltered lately. I wanted to know more about the world of that age, not just the fiction and technology, but the culture, the fashion, the politics, and how they ultimately led to the age we know today.

Twenty people make up the Journey now, demographically diverse, from all hemispheres of the globe. What we make is, I think, a lot more than just a fanzine. It's a living time capsule with something for everyone. We've finished The Twilight Zone and The Outer Limits, and we pretty well wrapped up the latter Silver Age of science fiction. Doctor Who is in its second season and will go on for a long time. Over the next few years, we're going to be covering a lot more familiar franchises: Star Trek, the New Wave of SF, 2001.

And we're really just starting the 1960s in earnest. Society is about to be turned on its ear, and at the end of the revolution are the seeds of our current world. I hope folks enjoy the trip as much as I am!