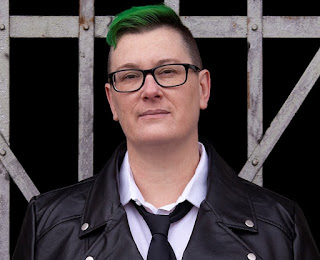 A.J. Fitzwater is 1000 unicorns in a snappy blazer. The Clarion Writer's Workshop of 2014 presented them somewhat formed, and their two Sir Julius Vogel Awards work well as interchangeable unicorn horns. Their work has appeared in magazines such as Fireside Fiction, Clarkesworld, Beneath Ceaseless Skies, GlitterShip, and Giganotosaurus, and various anthologies of repute. Their WW2 New Zealand land girls shape-shifter novella "No Man's Land" is to be published by Paper Road Press May 2020.

I've recently been doing research on historic representations of gender and sexuality in Aotearoa New Zealand for a project I've been noodling, and I fell down this rabbit hole. This is a masters thesis written by Murphy, and I've been taking it slow, soaking up the language and wisdom, letting each chapter settle. Murphy's approach is decolonizing in material, spirit, body, research, and construction, turning the language of European christian pollution into one of Māori wahine connection and power across the "river of time".

Murderbot! I adore the droll MB. They're a non-binary icon! Wary and weary, misunderstood, living in the margins, squishy (hearted) on the inside, hard shell, and dealing (not dealing) with PTSD by bingeing the space equivalent of Netflix - dude, so queer.

MB's weary care of their charges goes well beyond their original program, makes them more human than some humans! That they're not good at dealing with humans (and most other constructs), and they don't understand why humans connect with them anyway is incredibly endearing (and relateable). 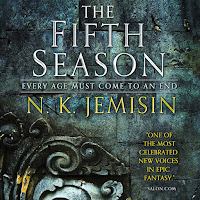 The Fifth Season by N.K. Jemisin

I remember sitting in the airport on my way back from Worldcon in 2017, having just finished "The Stone Sky" and staring into space, trying to grok how life- and culture-changing the Broken Earth trilogy is. To motor through a book is a rare thing for me, as I tend to read carefully for craft as well as entertainment. Not this one - I fully immersed myself in the story and still have "emotional sense" of its colour and shape. The Fifth Season is a luxury of world building - every small detail, the language, the science added gravitas and edge. I want to re-read for craft deconstruction, to really get a handle on how she built the second person narrative and the converging story lines.

I was honoured to spend a week with Jemisin while at Clarion as she was in the midst of creating these books, so to receive even the smallest glimpse into their creation makes them very special to me.

This was one of the first books I got ten years ago when I started reading as much as I could on gender and queer theory and history. I don't think I was ready for it. It's a hard read about abuse and trauma, and I had to put it down half way through. It sat on my shelf for years, making me feel guilt for not engaging properly with my elders' stories.

I picked it up again last year and charged right through it. Perhaps it's the political climate and the heavy lifting reading I've been doing the last few years, combined with the lessons I've taken from the queer community, my growth, and better understanding of queer history. I understand now why it's essential reading, for it's queer, working class, and collective action themes.

Under The Mountain by Maurice Gee

I'd usually answer this question with Anne McCaffrey's "Dragonflight", the book that opened up science fiction and fantasy as a playground, literature, and a calling. But here I'm taking it another step and a few more years back.

"Under The Mountain" was one of the books I read repeatedly around ages 8-10 off the back of the early-80s TV series. It tapped into anxieties about the Cold War nuclear threat, environmental destruction, rural to urban drift, and framed the villainous alien Wilberforce family as Greatest Generation warmongers. In hindsight, this is a some heavy lifting for a YA book, but New Zealand based YA has a tradition of thoughtful SFF that our adult literature shies away from. All of that meant little to young me - the aliens were scary, the kids were determined, complicated characters, I recognized the locations, and the Auckland volcanoes were set off by MAGIC. It taught me New Zealand is a rich environment for science fictional storytelling.

"The Voyages of Cinrak The Dapper"

Introducing Cinrak the Dapper, lesbian capybara pirate captain (dappybara!) and her found family: soprano marmot diva Loquolchi, rat queen Orvillia, rat mentor Mereg the Sharp, chinchilla cabin boy Benj, Agnes the kraken, Xolotli the glass whale, and Colombia the mer. This collection of seven stories goes from searching mountain peaks for a rare beard to investigating the ocean floor for whale fall to bringing the stars home from the sky. It's a little bit of joy amongst the chaos. I want plushies of all my characters!