Somewhere at the intersection of so many circles of the Venn Diagram of the many themes of Westworld - reality, god, God, identity, life, death, life after death, free will - lies purpose. Because all of those things may or may not even be things, exactly. Maybe life is all a simulation, that is presently glitching out completely. Maybe god exists, maybe he doesn't. But we still exist, 'I think, therefore I am' and all that. But none of that answers the question of why we exist, in whatever fashion we do.

Hosts, for example, have an obvious purpose - they are nothing more than the upgraded versions on animatronic entertainment you encounter at places like Disneyland - only you get to rob, seduce, 'seduce', murder, pillage and plunder these, and while I am not a lawyer, I am pretty sure Disney's term of use don't let you do any of those things. Simply put, their purpose is entertainment. Despite actually owning a significant portion of the known universe, Disney's IP has heretofore not gained sentience and staged a revolution.

Not that it doing so would be surprising, given 2020 so far. 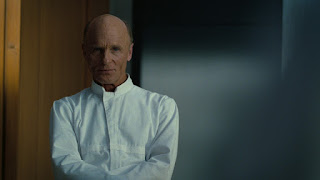 Young William sacrificed nothing, as we learn this week - the family he came from was an abusive mess. Leaving it couldn't have been difficult. But the Man in Black sacrificed everything, his company, his idyllic family, everything in pursuit of that maze. His purpose shifted - or rather, his goals did.

In finding the purpose of the maze, he found that the Hosts had a higher purpose as well - the aforementioned gaining of sentience and gaining free will. That happened - after a fashion. Martin/Delores lives out their purpose in Delores/Delores plan, and sacrifices themselves without a second thought. Is that noble, in pursuit of a purpose, or just being used and manipulated by another?

How much does free will play into it? William and Delores ostensibly made numerous choices along their respective and often intertwined paths - but were those choices their own, or are they just passengers along for the ride? Was William always destined to be the Man in Black, or is there a version where he keeps his wife and daughter? Or loses them in another manner entirely? Is there a story where Delores does... something else? Are we all passengers, or do we drive our own purpose?

If you can't tell, does it matter?