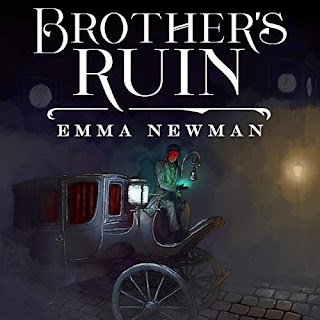 In an alternate 1850’s, the British Empire is flourishing as vitally as it did in our timeline, but from different base causes. Instead of the power of the Industrial Revolution providing the motive power for Monarch and country, the Royal Society of Esoteric Arts provides the competitive advantage for Great Britain to stand astride the world. But this society of magicians is a merciless one, taking every person with magical talent, whether they like it or not. Charlotte Gunn seeks to aid her family from the financial disaster that her father is in by making sure that her brother’s talents are seen and compensated for. Oh, and in so doing hide her own deep, dark secret from the Royal Society: Charlotte, you see, is a mage too.

Charlotte, and her world, come to life in the Tor.com novella Brother’s Ruin by Emma Newman, now in a new audio edition.

Charlotte is the heart of this book, and is an archetype of a character that is a hallmark of much of her fantasy work. A woman caught between duty, responsibility, and a burning desire and need to forge her own destiny and path. A strongly grounded sense of responsibility to her family and friends, and add in conflict from all directions as a crucible for change and growth. Personalities are different across her heroines, but the basis ur-struggle that they face is one that has been less prominent in SFF until recently, and Newman brings these character concerns to light. As a secret mage who desires a husband on the one hand, and to save her family from ruin on the other, Charlotte is caught in an ultimately untenable position that forces her into some dangerous choices and decisions.  The author’s sympathy and concerns for the social implications of her world are made plain and made manifest in how it affects and oppresses her heroine, and that come across the page evocatively.  In addition, it should be noted Charlotte is more powerful, and more important than even she realizes, and I suspect that like her other worlds, Charlotte may be a fulcrum for change of not just herself, but the world around her as well.

The actual plot and length of story, then, in Brother’s Ruin feels and runs a bit short. This novella really is a lot of setup of Charlotte, her family, her world, her allies and antagonists. There could have been a bit of more meat on the bone for plotting and development on those lines, the focus on grounding Charlotte as a character and getting to know her overshadows plot events somewhat. The plot, as it does appear, though, even as it is less than what I would have wanted, does setup obvious lines of development and questions to be asked about how Charlotte’s world actually functions.

And in that vein, too, I would have liked to have seen more and learned more about how this world came to be, and when things developed as they did. Much like her Split Worlds universe, or her Planetfall universe, I am always curious as to the rest of the world. Even with the strong focus on character to keep the attentions and focus of a reader like me on the characters whose story she wants and needs to tell, I like to know more. What’s America like in this world? Canada? Australia? The rest of the world? Inquiring minds want to know! Gaslamp fantasy, with a not-so-quite-interconnected world does make things from foreign shores a less pressing concern than, say, if this were a Steampunk Colonial Conquest era set book, but I am curious all the same.

The audio narration, done by Newman herself, is top notch, as befits someone with long and deep experience in narrating audiobooks. Her rendition of the story brings an extra level of interest and captivation for me as a reader. I must note, however, that the app that the audiobookI listened to it on, Author’s Direct, had some technical issues, mainly stopping at random moments in the narrative. Fortunately this was not while I was doing something unsafe to check and restart the audio, such as driving, I think that I would counsel readers to grab the Audible edition instead, and should the second Gaslamp fantasy novella, Weaver's Lament, come to audio, I think I will go for the Audible edition.

The strength and power of this book is in its heroine, and her perilous position balancing family, duty, and her own desires and needs. It is that strength and power I look forward to Newman exploring in subsequent novellas and stories set in this world, and I look forward to reading them. Once again, Newman has created a world and a central character that is captivating and enthralling.

Bonuses: +1 For rich use of theme in the central character’s personality, issues and dilemmas.
+1 for a rich narrative experience.

Penalties: -1 Story somewhat slight and incomplete -- really just an entree into a longer story and exploration of the character and story
-1 The platform the audiobook is available on has technical issues that impacted my enjoyment of the book significantly

Nerd Coefficient: 7/10, an enjoyable experience, but not without its flaws