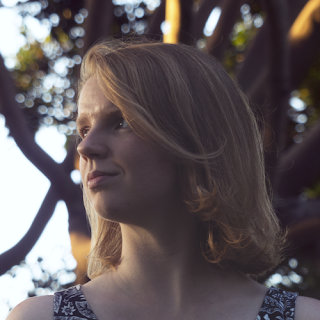 What do you get when you mix a passion for game design, film, computer science? Now throw in a love of space opera, humor, and compelling relationships.  Stir it up, add a few surprises, and you're getting close to Emily Skrutskie's new novel Bonds of Brass, available April 7th.    Everything I see about this book, everything I read about it,  Bonds of Brass just sounds like a joy to read, a book that's filled with everything I enjoy - crushes, banter, scams, quick getaways, politics, explosions, and oh the tension!

Not sold yet?  Scroll down until you get to the "poster", don't worry, you'll know it when you see it. How can you look at that poster and not smile?    And I don't know about you, but right now I only want to read books that make me smile. And the best news ever? Bonds of Brass is the first in the Bloodright trilogy!

Emily Skrutskie is also the author of The Abyss Surrounds Us, The Edge of the Abyss, and Hullmetal Girls. She was born on one coast of the United States, and now resides on the other, and is currently working on the next two Bloodright novels.  You can learn more about Emily's work on her website, Skrutskie.com or by following her on twitter, where she is @skrutskie. She was nice enough to let me pick her brain about where she got the idea for Bonds of Brass, if she's a plotter or a pantser, music playlists and listening to movie soundtracks for inspiration, the now famous poster, and more.


NOAF: Tell about Bonds of Brass. What's the elevator pitch? Where did the idea for this book come from?

E.S.: Bonds of Brass is basically Star Wars meets The Road to El Dorado. It’s the story of a pilot on the run with his best friend, roommate, and possibly the love of his life—who happens to be heir to the brutal galactic empire that ruined the pilot’s life. I got the idea for this book in the period of time after The Force Awakens had just come out, when I had also just finished reading Pierce Brown’s Morning Star. I wanted to write a big dramatic space opera with tricks up its sleeves—and I was also deeply inspired by stories about charming con men running elaborate scams. Mush those two things together, and you’ve got the basic ingredients for Bonds of Brass. 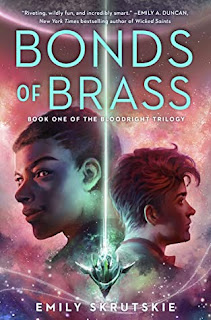 NOAF: You had me at "meets Road to El Dorado".  Talk us through how you developed Ettian and Gal's characters. As you were drafting the novel and deciding where the story would go, did their characteristics or goals change?

E.S.: I had a pretty clear vision for who Ettian and Gal would be from the start. Ettian is the pilot, the underdog who came up from nothing, the reserved kid who survived hell and keeps his emotions close to the chest. Gal is the prince, the negotiator, the person the universe is meant to revolve around. As I drafted, I got a better sense of what those qualities meant and how they functioned in action, and figured out all the ways they'd tie the two of them together. The most interesting evolution came when I realized Ettian needed a stronger motivation to put Gal on the throne than "he's my best friend" and as a result had to give Gal a significant anti-establishment streak that promised radical change to the cruel galaxy Ettian grew up in.

NOAF: What was your writing process like for Bonds of Brass? Are you a strict outliner, or do you let the story "write itself"?

E.S.: Outliner all the way! For me, a story is only as good as its ending - first impressions are important, but last impressions last. So I plan a story all the way to the end before I start it, and that way I know what I'm working toward. This really helps me write economically, because everything I put on the page is a building block toward reaching that ending and driving it home in a way that’s satisfying to the reader.

NOAF: What was the most fun part of this book to write?

E.S.: About halfway through, there’s a chase/fight sequence that takes place on a public transit wiretram. To put myself in the mood for the scene and lock into the wham-bam improvisational mindset of the characters, I watched Jackie Chan clips on YouTube for about an hour straight. I really wanted it to feel like a Hong Kong action movie, and it was delightful to slip into that mode for a while. 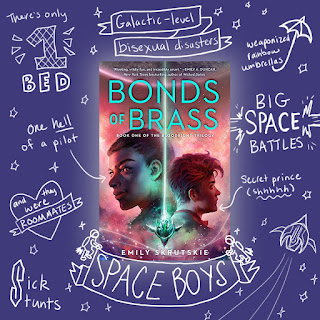 NOAF: The only thing that looks more fun than the book itself is the adorable promotional poster! This poster is so cute, it looks like doodles you'd find in a high schooler's notebook, notes that would be inside a student's locker, it is just covered in fun everything! Where did the idea for the post come from? Is this how you imaged the promotion for the book would look?

E.S.: The words on the poster were from a graphic I whipped up ages ago to pitch the book - which had its own little viral moment when FinnPoe twitter found it and EXPLODED. That was incredible to watch, and proof that those words did a fantastic job of pitching the book, so my marketing manager, Ashleigh Heaton, designed that wonderful little promo graphic with the handwriting and doodles for us to share. I think we’re seeing a really interesting moment where book promotion is truly adapting to social media, figuring out the most fun way of showing off what a book has to offer an audience in a highly-shareable format. If you want fans, you have to be able to prove both that you have what fans want and that you know how to talk about it in a way that engages them, and for me personally, that’s super fun to do.

NOAF: You recently posted a Bonds of Brass track list on your blog, of the music that fueled your writing. How do you use music as a writing tool? Do you listen to faster paced tracks to write action scenes, for example?

E.S.: I feel like I use music in three main ways when working. Most of the music you find in that playlist is music I use for inspiration - songs that speak to different aspects of the book and guide me as I think about them/develop stuff. Then there’s music I use for motivation - such as the Skydiving track from the Kingsman soundtrack or Storming New Caprica, from the Battlestar Galactica season 3 soundtrack. Those are songs I'll put on to ground me in the mood for a scene and help me focus on how I want to express myself. Then there's music I'll actually write to, which I'm very particular about. I can’t hear English words when I draft, so I usually stick to instrumentals, and I have collections of film soundtracks I rotate between depending on who I’m writing - for example, most of the big Wen action scenes in book two were written to a mix of the Captain Marvel and Wonder Woman soundtracks.

NOAF: I saw this on your blog as well: "WIPs: John Carter Book: Basically if John Carter and The Fifth Season found themselves in the same pot of soup" and OMG YES. Yes please! Why'd you choose John Carter, and why throw him onto an Earthquake planet (other than that it's fun)?

E.S.: Haha, I hope I get to go back to that WIP someday. I'm itching to write something that has John Carter or She-Ra vibes—something that's got the magic and scope of epic fantasy grounded in sci-fi worldbuilding. I feel like that’s really going to push me as an author, since so far I've been strictly science fiction. Developing a magic system has been breaking my brain as someone who understands a little bit too much about physics. But first things first, I have two more Bloodright books to get out the door.