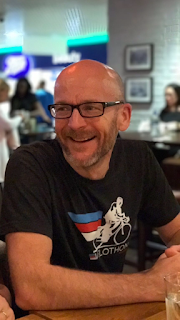 Tim Lebbon is the New York Times bestselling author of Coldbrook, The Silence, and the Relics trilogy. He has also written many successful movie novelizations and tie-ins for Alien and Firefly. Tim has won three British Fantasy Awards, a Bram Stoker Award, a Shocker, a Tombstone and been a finalist for the International Horror Guild and World Fantasy Awards. The Silence is now a Netflix Original Movie, starring Stanley Tucci. He tweets @timlebbon.

Today he shares his Six Books with us...

Unbury Carol by Josh Malerman. It's brilliant. But then, anything by Malerman is brilliant. It's the third novel of his I've read, and all three have been so different in structure, pacing, and their use of language. I love the otherworldly feel of this novel. You think you've got the measure of it, then something switches it, flips it, and you have to rethink everything you're previously assumed. And the lush language and writing is sublime. I don't want it end. And I'm very pleased it's such a long novel.

Is it a cheat to name a book I've already read? I was lucky enough to read an advance copy of Survivor Song by Paul Tremblay, and I think it's his best novel yet. He just keeps getting better. Some of his work has been characterised by ambiguity and doubt, but this is more of a rollercoaster ride through a terrifying societal collapse. A little close to home right now! We all know Tremblay is one of the best, but for me this novel just cements his place as one of the most talented and intelligent horror novelists around right now.

I very rarely reread books, but recently I picked We Have Always Lived in the Castle by Shirley Jackson from my shelf and put it aside for another read. I first experienced this novel maybe twenty years ago and remember being bowled over, so now's definitely the time to view it from a more middle-aged perspective.

The result of not rereading much is that my opinions of books rarely change. They're stuck in the moment I read them. I loved James Herbert's novels when I was in my early teens, for instance, but I have a feeling I should never go back and reread them. Similarly––and it would be unfair of me to name titles, I think––there are books I've started and put aside when I didn't get on with them (something I do more and more as I get older), which now I think perhaps I might appreciate more.

The Stand by Stephen King. It's still my favourite of his. The scope, the grandeur, the characters, the dread and terror, the sheer talent involved in writing a book like that. Actually that's another for the 'itching to reread' category above. I must have read it 3 or 4 times, but not for the last twenty years or so. A bit too topical right now, perhaps.

Eden is due out April 7th in the UK and US, from Titan books. It's an eco horror thriller (my publisher's words, and I like them!), in which a group of adventure racers attempts to cross Eden, a vast area of land that has been handed back to nature. But they find that in Eden, nature no longer welcomes humanity. It's inspired by my love of endurance sport, and my concern about the climate crisis. I think it's the best novel I've written in years.

POSTED BY: Paul Weimer. Ubiquitous in Shadow, but I’m just this guy, you know?
2020 Hugo Finalist for Best Fan Writer.
@princejvstin
Posted by Paul Weimer at 12:00:00 AM