SL Huang is an Amazon-bestselling author who justifies her MIT degree by using it to write eccentric mathematical superhero fiction.   She is most well known for her Cas Russell books – Zero Sum Game and Null Set.  The third book in the series, Critical Point, hits bookstore shelves later this month.   If you like math geniuses with memory issues who typically solve problems by punching people,  found families, and gray morals, these are the action packed and snark filled books for you!

Her short fiction has appeared in Nature, Analog, Uncanny, Daily Science Fiction and in multiple anthologies and Best Of collections, and she recently wrote three episodes of the shared world series The Vela on Serial Box.

Huang is also a Hollywood stuntwoman and firearms expert, where she's appeared on shows such as "Battlestar Galactica" and "Raising Hope" and worked with actors such as Sean Patrick Flanery, Jason Momoa, and Danny Glover. Follow her online at www.slhuang.com or on Twitter as @sl_huang.

She kindly answered my questions about the newest novel in the Cas Russell series,  how Cas has developed over the years, the journey from self publishing to getting picked up by Tor, scientific werewolves, how much fun it was to work on The Vela,   the arcane magic of outlines, and more.


NOAF: What do you enjoy most about writing the Cas Russell books?

S.L. Huang: The snark! Nothing gives me greater joy than banter between my characters.
I also really, really enjoy writing characters who are often not nice or who make tremendously bad decisions - but in ways where we want to root for them anyway. They're very flawed but I love them so much. Cas’s impulsivity makes the books speed along, because she's so very likely to try to "solve" a problem by punching people, and then have a fifty percent chance of making things WORSE…


NOAF: Book 3 in this series, Critical Point, hits bookstores shelves at the end of April. What's the elevator pitch for Critical Point?   Without giving us any spoilers, can you tell us what scenes was the most fun to write?

SLH: The real elevator pitch: "FAMILY! This book is all about family—the family you live with, but also the family you find along the way. And my very prickly main character has a lot to learn about it. Oh and LOTS OF EXPLOSIONS. Truly a staggering number of explosions."

The elevator pitch in my head: "THE ONE THAT IS SUPER GAY!!! Oh and also lots of explosions." As a queer author, it’s delightful to me that it fits this book to put my characters' queerness on the page a lot more than it has in the previous books!

The elevator pitch according to my first reader: "THE PILAR BOOK." I confess this is also something I love: Pilar has been working up in her gun-toting skills since she was introduced, and this is the book where she and my main character become an action duo in a lot of scenes. Two women of color, kicking ass and taking names, one of them who shoots too many people and one of them who is too nice to everybody.

As for the scene that was most fun to write… I adore a lot of the family scenes to the point where I had written many of them before I finished Book 1, because I knew this was where I was headed. Also the explosions. I am fortunate enough to have explosives and fire experts among my friends and family, and there's one rollicking fun explosion near the end that came from my sister, who is a firefighter, telling me: "Use this. This'll be fun!" 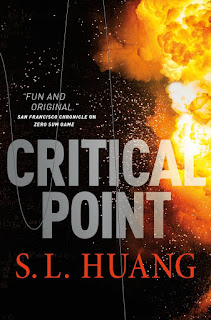 And it's SO fun. Well, not for the characters. They're not so happy about it.

NOAF: These are fast paced, action thrillers.  While outlining and drafting, how do you keep the pace of the story so fast? How do you know when to give the characters a break from the action?

SLH: Outlining, ha! I cannot outline. I wish I could. It is arcane magic to me.

I have to "write through" things to figure them out - but after that I'm pretty good at putting together the book by feel. I can usually sense when it starts to stagnate, or when the characters need a breather, and I'll go back and rewrite if the pacing feels like it’s starting to skew.

Then, once the book is done, my editor, Diana Gill, has a fabulous sense of pacing and thriller tension. She totally keeps me honest. If the stakes aren't quite high enough, she makes sure I raise them! I love how great she is at seeing that, and it makes me feel very secure at the publication stage that there's no way the excitement will sag for readers.

NOAF: You originally self published this series, and then the series was picked up by Tor. What changes, if any, were made to your original self published versions?  How was working with Tor different than going the self pub route?

SLH: The first book was changed a lot less - we added a chapter and then I rewrote most of the climax and ending from there, but the first 2/3 were mostly the same. The second book was originally the fourth book, and we tore that one apart pretty thoroughly - largely to make it stand alone more - though the general plot is the same and the characters start and end in the same place. The third book is brand new!

Personally, I love being with a publisher, especially with the fabulous people at Tor. My editor really "gets" the books and her comments only make them better - I'm so much more proud of the Tor versions! I also love not being an island; being with a publisher means a whole team is supporting me, and they're utterly fantastic.

NOAF: As the Cas Russell series continues, Cas has more friends and allies. But that makes her more vulnerable to the emotional weight of those relationships.  How does her character change and evolve through this?  Did you always plan for her to eventually be less of a lone wolf in this way?

SLH: Oh, yes, that was always exactly the plan. She's very much two steps forward, one and three-quarters steps back when it comes to her relationships with people, but I always wanted her to improve incrementally on this front. The character relationships are what make the books for me, so those awkward friendships are some of my favorite bits. 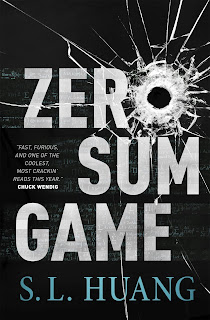 And yeah, her lack of emotional skill - and the conflicts it introduces - was always planned to be a big source of difficulty for her, but at the same time a huge source of growth. Er, very slow growth.

NOAF: Are you planning more novels and/or short stories in the Cas Russell universe?  Where do you see the story going from here?

SLH: As long as readers keep buying and reading them, I will keep writing them! Without giving away the end of Critical Point, the "powered" people in this universe and their intersection with society have so many terrible possibilities to explore. This is all getting bigger - way bigger than the conspiracies in the shadows the characters have dealt with so far.

Not to mention the unanswered questions we still have about the characters' backstories… I know readers have been champing at the bit about learning more of Rio's history in particular, since I've only been doling out bits and bobs of it. You learn more about all the characters in Critical Point.

Oh, and I really want to do a novella in which Rio starts becoming a werewolf. (Scientifically, of course.) That's been noodling around in my head for ages.


NOAF: In 2019, you wrote a number of episodes of The Vela, a  work of serialized fiction from Serial Box Publishing. Other authors involved in the project were Yoon Ha Lee, Rivers Solomon, and Becky Chambers. How was it different to write in a shared universe?  Because the episodes are a standard length and are full audio, were there word or time limits that you had to take into account, and how did that effect how you wrote your episodes?

SLH: I LOVED doing The Vela! The writing team was just so fabulous and I can't say enough good things about them.

Writing in a shared universe - with such fantastic co-authors - was marvelous. Like eating cake. They all had such good ideas, and we would build on each other in ways I could never do as a solo writer. I'm so very proud of the story we wrote. It's jam-packed full of topical themes like migration and climate change even though it's set in a far-flung solar system, and the characters we drew up are such an incredible cast.

The process was certainly more structured than when I'm writing alone - it had to be! - but not in any way that I felt was limiting. I'm pretty good at knowing what will fit into wordage of varying lengths, as I write enough short stories to have a feel for it, so it was never an issue for me to pick a chunk of story that would work out for the size of an episode.


NOAF: You also have a forthcoming novella coming out from Tor.com, called Burning Roses, where Rosa (Red Riding Hood) and Hou Yi the Archer join forces.  What more can you tell us about this?

SLH: Two old queer ladies fight magical things together and angst about their families! In a mix of Chinese and Western folklore!
Also starring:
Goldilocks as an abusive con artist
Beauty and the Beast as a human trafficking story
The Jade Rabbit as a threatening dream guide because it's fun to make rabbits scary
And Puss in Boots because why wouldn't I throw in a cat in boots.
Also morally ambiguous dragon slaying, attempted matricide, birds MADE OUT OF FIRE and two very complicated families.

NOAF:  Thank you so much!  And consider me first in line to read Burning Roses!
Posted by Andrea Johnson at 12:00:00 AM