Do you ever ask yourselves any questions? 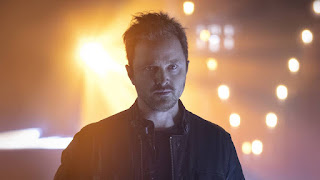 Memories are a tricky thing, under the best of circumstances. Our memories frequently deviate from reality for a whole host of reasons that I am unqualified to speak to. False memories are a thing, and boy howdy, did they mess with Caleb's. In possibly the most predictable twist in the history of Westworld, he is actually the one who killed his BFF.

Speaking of, William is now the Man in White. White hospital garb, that is, and it is hardly virtuous. We have known Caleb has been, uh, not himself, let's say, since we met him. William, we have gotten to know through multiple versions of himself - ones that were are recently pulled together for the group therapy session from hell. We're really always ourselves though, aren't we? Memories - like the realities vs fictions in the show - are still a part of us, real or imagined. And there aren't actually multiple versions of ourselves - yes, we grow and change over time, but time is linear. There aren't copies of ourselves kicking around out there, for good or evil.

It makes me wonder what William wants. Not his goals in the show, but as a person. His goals have changed. When we first* meet him, he is young, ambitious and successful. Charming and ostensibly good, but always... safe. Everything he does - his career, who he marries, why he even goes to Westworld in the first place is calculated and safe. He manages to slightly tell Logan to eff off, but there is no punch behind it - he won't endanger the professional relationship. Logan knows William doesn't like him, and bully that he is, revels in the fact that William needs him.

His goals shift - get through a bad vacation with his idiot brother in law and get home and start his idyllic family, to protecting Delores, to learning about the maze, and now he wants to wipe the hosts out. His reasoning there is fatally flawed - he says the hosts are his only true mistake.

An objective person may disagree with that.

No one got in William's head but himself. For all his care and ambition, he let things far outside of his control and outside of himself affect who he became. He defends his wife's suicide, his murder of his daughter, and myriad other sins by blaming the hosts and the park. But it was his choices that lead him there - and he didn't have an omniscient AI controlling him to blame that on. His memories, his thoughts were certainly deluded, but how did they get so muddled in the first place?

William didn't get the same treatment to divorce his memories from reality, but the affect is largely the same.