The further adventures of an anxious, misanthropic cyborg and its human acquaintances 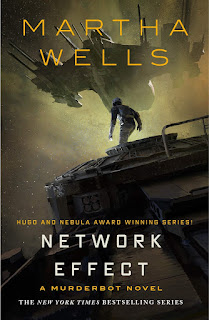 Murderbot is back! After its escapades in the novella series which began with All Systems Red, Martha Wells' multiple Hugo winning series is now back and its in full novel form - welcome news to those of us who have followed its adventures to date. Network Effect has been on my anticipated reads of 2020 ever since it was announced, and I was delighted when I got the chance to find out how life after solving the problems faced in the novella would be shaping up for our favourite misanthropic cyborg.


Murderbot, for those who aren't acquainted, is a rogue SecUnit: a specialised cyborg (though it definitely identifies more on the "robot" side and tends to get a bit weird about its organic parts, particularly the ones that give it awkward things like "feelings") rented out by a company to various contractors in need of security. Murderbot's galaxy is one in which Corporations own most things, and indeed most people, and that arrangement is exactly as bad as it sounds for most of the indentured people we meet, and particularly for bots which aren't supposed to have any autonomy or desires of their own. During its career as a company SecUnit, Murderbot discovered how to hack its own governor module (the thing keeping it from doing anything the company didn't like) after an incident (the one that caused it to give itself a name) was wiped from its memory. What follows is a series of adventures I'm not going to recap for you here when there are four perfectly good novellas to go and read instead. For the purposes of Network Effect, what's important to know is that Murderbot fell in with some good humans, saved them, left them to figure out the mysteries of its past and work out why they've drawn the attention of a particular company, met some more people and bots, and ended up coming back to the first group of humans just in time to save the day more decisively. Now, Murderbot is a tenuous part of a human family on a non-corporate planet called Preservation, and everything would be going just fine if everyone could actually turn up to their relevant therapy appointments and also if the bad guys could give it a rest forever. Also, there are teenagers involved in this family, and that's a whole new ballgame for Murderbot to deal with.

Those concerned that a novel length Murderbot might be too heavy on those (ugh) slow sappy feelings will be happy to learn that Network Effect opens with a ton of action: in fact, we meet it literally in the middle of trying to save the research ship on which it, the aforementioned teenager, and some other family members are working from pirates. Then we segue from pirates and boat battles into space battles, and then into desperate escapes, and then into tense empty spaceship exploration, and by a third of the novel in, I was wondering if we'd ever get space to breathe or if this book was going to be novella-paced action levels maintained for the length of a novel. Of course, this is Martha Wells, so we're in safe hands when it comes to balancing high action sequences with slower, but still tense, interpersonal moments, and things calm down considerably once Murderbot gets its humans all to a point of safety, with the return of an old friend in the bargain. That's good, because it gives us time to establish the new threat and how the returning character fits in, and also for Murderbot to lock itself in a bathroom and sulk for a few hours. To proceed further would be to spoil too much, but suffice it to say that Network Effect takes the series in a new direction that feels like a very natural evolution from the previous arc, while offering a standalone adventure within this book that explores some new background from this particular galaxy.

The highlight of Network Effect remains, of course, Murderbot's character and voice, and while the opening third had me a bit worried that this might be too much more of the same, there's definitely more space for development here, in both natural and, in one case, very left-field directions. The main change this time around is the presence of a group of humans who are already very familiar with Murderbot, and once they team up with Spoilery Old Friend (I feel like it's going to be impossible to get through this review without it looking obvious who this is, but you might be surprised) we get to watch Murderbot confront something we haven't seen it deal with before: people who know you and care about your wellbeing and who won't stop acting on information you've given them, no matter how much you try and hide the important things. It's understated, but Murderbot's progression from "if people know what I really am, they will kill me", and consequent horror at not being able to stop people from picking up on its behaviour, to being able to accept community and trust people around it with knowledge about itself is an arc that only gets more perfect the more one thinks about it, and its handled incredibly well. It also offers a lot of humour, as we see Murderbot's habit of eavesdropping on everything and everyone come back to haunt it. One of the most fun parts of Wells' Raksura novels was watching species with social norms that more closely model humans observing and trying to figure out Raksura dynamics from the outside, while we as readers had a mostly-inside view; Network Effect does similar things with its AI and human dynamics, to great effect.

Of course, the supporting cast has to be strong in order to carry this, and there's definitely a fun group of people here. Of particular note, is the aforementioned teenager, Amena, who also happens to be Mensah's daughter. In the opening chapters, we get a flashback (one of several mysterious out-of-chronology sections) which establishes why Amena is sceptical of Murderbot, and without giving anything away, it's a reason that's much more teenage than any of the human reasoning that the series has dealt with so far (and also establishes Murderbot at 100% in the right, even if we can see why Amena doesn't think so). Having to build a relationship with a young person who is also trying to figure herself out and get hold of her emotions while having a healthy frustration at authority figures - including Murderbot - is an entertaining challenge for our protagonist, while also representing a relationship that's equal in important ways that Murderbot's relationships with human adults generally can't be. Murderbot's relationship with Amena and her family (and, vicariously, Dr Mensah, although she isn't present for the vast majority of this book) also means the stakes are higher than any of its previous adventures, as it has things to protect and far more ways to become, as it puts it, "emotionally compromised" than before.

Given that this is the first novel length entry in the series, and the beginning of a new arc after the four novellas, I had both expected and feared that Network Effect would be more of a"reboot" here - new characters, new dilemmas, and an obvious entry point for Murderbot's ongoing troubles (both physical and emotional). Instead, Network Effect is definitely a "Season 2 opener", and to get the full impact of Murderbot's journey you'll definitely want to have read the previous novellas. However, the plot and returning characters are all pretty straightforward, and Network Effect's opening will plunge you right into the action in a relatively accessible way, so starting with All Systems Red isn't an absolute requirement. All in all, this is another great entry into a series that probably needs very little introduction. Murderbot is a top bot, a great pal, and I'm glad that they're looking to stick around for more adventures to come.

Bonuses: +1 humans who overcome their inherent awfulness to actually not be too terrible.

Penalties: -1 Action almost gets too much for the first third of the novel.

POSTED BY: Adri, Nerds of a Feather co-editor, is a semi-aquatic migratory mammal most often found in the UK. She has many opinions about SFF books, and is also partial to gaming, baking, interacting with dogs, and Asian-style karaoke. Find her on Twitter at @adrijjy.
Reference: Wells, Martha Network Effect [Tor.com Publishing, 2020]
Posted by Adri Joy at 12:00:00 AM