Microreview [Book]: The Twisted Ones by T. Kingfisher 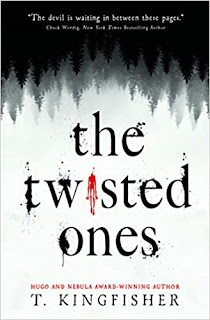 I've been building up quite the backlog of unread T. Kingfisher fiction and as I'm not normally a horror person, The Twisted Ones had been quite far down my list. However, when the prospect of picking up a review copy arose from Titan Books, who have brought this latest adventure to the UK, I found myself unable to resist the call of spooky Kingfisher, and I duly put it on the to-read pile for the right moment. At the time, I wasn't expecting that right moment to be in the middle of the countryside during a pandemic, but luckily the land I'm currently based in is flat, open and agricultural, and not covered in trees hiding goodness knows what... otherwise, yeah. This one is spooky, friends. You have been warned.

The Twisted Ones is the story of Mouse, a thirty-something freelance editor who receives a call from her Dad after the death of her awful Grandmother, asking her to clear out the house she had left behind in a small town in North Carolina. Despite not having been close to her awful Grandmother for obvious reasons, Mouse agrees to help her Dad out, and relocates along with her coonhound Bongo to discover that as well as being awful, Grandma had also been hoarding for decades, and now there's a house full of bundled newspaper, ancient food and creepy dolls to pick through and she can't even reach the upstairs. As if that isn't bad enough, when Mouse clears out a space in the only usable bedroom, which had belonged to her Step-grandfather, she finds a diary full of wild ramblings about twisted creatures in the woods and a missing manuscript which holds the answers. Her phone has picked up a weird glitch causing it to overheat and not hold a charge, she's alone in the house of a relative who hated her and was nasty to everyone she ever met, and not even the nice folk at the commune next door or the sweet Goth barista at the town's coffee shop can make this whole situation feel less than awful.

Then something starts tapping at the window, and soon Mouse discovers that the property she is clearing out has some terrifying connections to another world full of creepy grey stone carvings, that there's more than just deer coming through the garden every night, and that the crucified effigy with an upside down deer skull hanging out in the woods behind the property is probably not someone's horrible art installation, and may also be moving of its own accord. The Twisted Ones moves from a mostly-psychological horror with just enough explicit weirdness going on to confirm that it's not going to be an "all in your head" sort of affair, to an equally terrifying but more concrete adventure, all told with a genre savvy edge by Mouse as she responds to the escalating creepiness of her current endeavour and to get everyone, including Bongo the best doggo, out of the situation alive.

Although I'm nowhere near literary enough to have picked it up, the acknowledgements reveal that The Twisted Ones is the take on a 1906 horror short, "The White People" by Arthur Machen, and contains the same "Green Book" lost manuscript at its core, featuring the increasingly convoluted musings of a sixteen year old girl caught up in supernatural events involving white stones, poppets, getting pregnant by looking at a rock, twisted ones and secret labyrinthine games. Unlike the original story, Kingfisher's version turns the recounting of a lost manuscript (in this version by an old man beginning to slip into dementia) into something that introduces a second layer of uncertainty to the original story, and places the main narrative in the hands of women who have no time for any of the sort of naive exploitative sexual awakening nonsense which men are inclined to write about young girls when they put them at the centre of a horror narrative. Mouse finds some help in Foxy, an older woman living at the next door commune, who marches into the adventure with a willingness to believe and listen to her new neighbour, high heels, and a bag full of sandwiches and other useful items for journeying into horrific pocket dimensions.

Not being a huge horror reader, I don't have a comparison for how chilling The Twisted Ones is compared to other stuff in the genre. What I can say is that, particularly at the midpoint where the threat of the Twisted Ones themselves is growing and the manuscript makes its appearance, I was feeling enough of an "oh no" stomach ache to put it down overnight, despite the threat of peril to an important character, and pick it up again the following morning in the bright open sunshine with not a dark woodland in sight. Kingfisher does a great job of demonstrating how practical Mouse and Foxy are while nevertheless pushing them deeper and deeper into the mysteries of the wood, and while we very much don't want them to keep themselves in the danger they do, its hard to fault them for the decisions they make. It all builds up to a conclusion that really makes the most of the white and grey grey rocks-and-bones aesthetic that's been built up (while still poking fun at the whole sexy impregnation stone) and then brings things full circle to Mouse's family and step-family and the hoarder house at the centre of it all.

Even if it's not your usual genre, I'd recommend taking The Twisted Ones out for a spin, even if you have to do it in brief chunks at the height of daylight in the safest and most well-lit space you can find. With its practical post-teenage women (and less practical dog) and its creepy woodland aesthetic, this is a horror novel with Kingfisher stamped all over it, and her take on the horror tropes is well worth checking out.

Bonuses: +1 Did I mention the dog is awesome? +1 Satisfyingly creepy with an evolution from psychological into outright "oh no"

Penalties: -1 Only readable during daylight hours

POSTED BY: Adri, Nerds of a Feather co-editor, is a semi-aquatic migratory mammal most often found in the UK. She has many opinions about SFF books, and is also partial to gaming, baking, interacting with dogs, and Asian-style karaoke. Find her on Twitter at @adrijjy.
Reference: Kingfisher, T. The Twisted Ones [Gallery/Saga Press 2019 (US), Titan Books 2020 (UK)]