Microreview [Book]: The House in the Cerulean Sea by TJ Klune

A gnome, the son of Satan, and the glimmers of sweet humanity collide in this heartwarming treat of a novel. 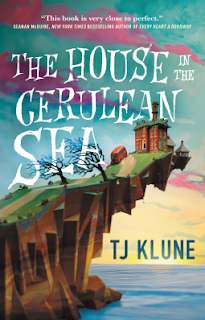 The House in the Cerulean Sea, a zippy, amorous novel, full of twists and witty one-liners, is a lot like the root system of the quaking aspen trees. Not exactly an obvious parallel, but out of all the metaphors that TJ Klune throws the reader’s way, none is more apt than the description of a root system of trees that are genetically the same, but have their own personality. Every which way you look at the novel can be traced back to the description of that root system.

Let me explain. It’s a novel about tolerance—how physical differences and personality quirks dictates each of our uniqueness, but nevertheless underscores how we all have emotions and innate goodness that is universal. It’s a novel about how even though everyone is born with innate goodness, the lessons we are taught by those in power have the potential to discolor our perception of those perceived as different, sullying our kindness in the process as we practice prejudice. It’s a novel about how being in the doldrums of mundane life can trap us in a bubble of minute satisfaction, where we’re so separated from any shred of excitement, that we don’t know there’s something better, to get us out of our shell and truly live. Like the root system of quaking aspens, the themes of The House in the Cerulean Sea speak to our universal desire to be accepted and find satisfaction, but the novel will elicit different emotional responses for each person, because like the trees, we all have our own distinct personalities.

The House in the Cerulean Sea follows Linus, a forty-year-old man, who inspects and oversees orphanages for magical children. In this world, people with magical abilities are seen as pariahs, so the extent of the orphanages’ upkeep is limited. Linus lives the epitome of a mundane life: no romantic aspirations, married to his work, no social life. Things change when the upper management of his workplace task him with inspecting an orphanage with children of particularly special skills, run by a warm-hearted, compassionate man named Arthur. Some of the children include a wyvern, a gnome, and the son of Satan. As Linus spends more time at the orphanage, his perception of his work and his own life expand in an increasingly heartwarming and instructive story. Romance blooms, friendships are made, and prejudices are questioned.

It’s a novel that’s filled with humor and a positive, romantic outlook of society. While not shying away from people’s prejudices, it instead showcases the injustices committed on people with magical abilities, but bears overflowing hope that everyone’s capable of overcoming those prejudicial shortcomings. And it delivers that message through highly readable prose, and a good sense of humor. However, while always in good taste, the humor doesn’t always land, due to instances of corny and/or wooden dialogue.

That corniness extends to the conveyance of the themes at the book’s conclusion, too. For most of the novel, Klune skillfully balances the optimistic and upbeat tone without being saccharine and didactic. But at the conclusion, it goes off the deep end. All the character development and themes - which, while never subtle, never beat me over the head - take a wrong turn, when all the information and sweetness that was already conveyed quite clearly, is then blasted with stilted, inauthentic speechifying that feels a little like an after-school special.

This wrong turn does not invalidate the rest of the novel, however, which has outstanding characterizations. And the budding romance slowly wrapped itself around me, until it made my cold heart melt. TJ Klune’s strength is definitely his understanding of people. Even though the novel is generally sweet throughout, he’s not afraid to probe into the characters’ flaws, which makes them engaging with an emotional complexity that’s oftentimes unmatched.

Cute and saccharine, funny and cringy, complex and blunt--The House in the Cerulean Sea is all those things. Most parts are terrific, some parts are noxious. The novel, like the root system of quaking aspens, branches out in all directions, and birth things made up of an intricate whole. The novel is a celebration of innate goodness, of people with generally good intentions with many distinct flaws. And when I finished the book, my mind glommed on to the heart put into the story, and less so its missteps. The quaking aspens aren’t just a metaphor for the novel’s themes. It’s a symbol of the book’s quality, showing that flaws can be generally overshadowed if it’s attached to intention and verve as good as this one.

Bonuses: +1 For having one of my favorite supporting cast of characters in some time
+1  While not packed with sweeping battles, the novel never loses momentum, and never lost my interest

Penalties: -1 Some parts were a little too cartoonish, not in a clever way, but in a way that simplified the story and robbed it of additional depth
-1 While there are some surprising reveals, the bones of the plot is quite predictable