Microreview [Book]: The Empress of Salt and Fortune by Nghi Vo

A novella with a heart almost too big to fit within its pages. 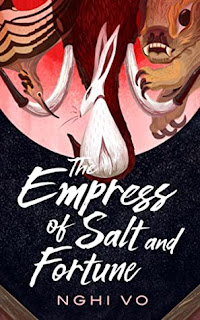 The Empress of Salt and Fortune by Nghi Vo is a book about boundaries—both the transcendence of the boundaries, and the lasting remnants of the things we leave behind upon the crossing. Whether it’s the transcendence of gender norms or class differences, the book subverts timeworn conventions, while looking back at the morsels of good we leave behind on our way. This short novella manages to craft a well-drawn world, with a story of epic scope and heartwarming themes, transcending the conventions of old fantasy. But I couldn’t help but think that Nghi Vo, upon trailblazing with great ambition, looked back at the archetypes and certain story beats of the genre, and took those along with her.

The novella follows Chih, a cleric historian, who upon the death of the empress In-Yo, heads to the new empress’ first Dragon Court to log the events. This location was once classified by In-Yo, but has now become declassified—the boundary obscuring the place’s storied past has been unlocked. Upon their travels, Chih stumbles upon Rabbit, an old woman who used to be In-Yo’s handmaiden, in a location that was the hub of the empress’ activities. Chih listens to Rabbit’s complex tale of her past, and the malevolence and beauty stored therein.

In-Yo is a character who was deemed lesser by the royalty, largely because of her womanhood. She held a noble position, but wasn’t treated like nobility, placing her in a sort of dead zone between nobility and peasantry. But without spoiling things, she took matters into her own hands to get her out of stagnation, and forge her own path. And Rabbit, who stays by In-Yo’s side, in a sort of exalted position that transcends the bounds of how most royalty seems to treat their servants, is free to forge a path of her own.

But for all its subversions in its politics, most of the characters could be a tad more developed. Chih is more of a vessel to hear Rabbit’s story, rather than a person of their own. In-Yo is on paper, the most complex character, but because of Nghi Vo’s decision to tell the story through Rabbit’s point of view, is portrayed in a sort of gilded voyeurism—we get the sense that this person is strong and complex in brushstrokes and brief descriptions, but the inability to get inside their head and only see them from a distance, detaches the reader from their layers and nuances. And Rabbit is portrayed, at least in the past sections, as a deferential, unassuming handmaiden (like many handmaidens in fantasy fiction) whose blooming romance is robbed of complexity by how she rushes through the telling of her story.

A lot of the characters are almost archetypical, and I don’t think it’s because Nghi Vo lacks the chops to do more with them. I just think a novella that chronicles a story within a story, the conquests of an empress’s life, as well as the nuances of her handmaiden, needed to be longer than one-hundred pages—and this is coming from someone who usually thinks less is more.

The archetypes are not the only component of the past—one of the major themes is built on looking to the past. Chih studies objects around the epicentre of In-Yo’s activity to get a sense of the history. And the story structure is predicated on a character looking back—it’s a ghost that brings a mix of joy and grief, not too dissimilar from the literal ghosts that haunt the pages.

The Empress of Salt and Fortune is an impossible book to dislike. Its sheer ambition for its page count is admirable. Its poetic sentences, more so. And its messages, even more than that. However, the core of the story is a flame that needed more kindle to expand. Nghi Vo crossed a lot of boundaries at some points, and stayed the course with others. It’s just a shame that the story didn’t take a few more turns to cross the line from good to great.

Bonuses: +1 For maintaining absolute coherency amongst a cavalcade of story threads that could’ve spelled chaos
+1 The writing has an original voice that never wavers in its stylistic beauty

Penalties: -1 The ending could’ve been even more powerful with some more pages of set-up

POSTED BY: Sean Dowie - Screenwriter, stand-up comedian, lover of all books that make him nod his head and say, "Neat!"
Reference: Vo, Nghi. The Empress of Salt and Fortune [Tor.com 2020]