Welcome back to Westworld Wednesday, a series of essays/ramblings about the themes & philosophies of Westworld. NOTE: while we deal more with themes here, rather than plot, the emphasis is not on what happened this week; HOWEVER, if you are reading this and wish to avoid spoilers, you should be current on the show (Seriously, there are spoilers in this). 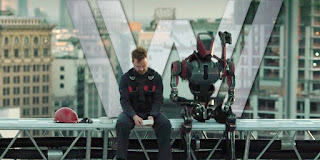 In Season Three, we have completely abandoned robot-cowboy murder and traded it for real-life--fatcat murder and I am HERE FOR IT. At least, right out the gate we have. Episode two opens with some good old Nazi murder, which is also awesome.

But enough about the plot. The best thing about Westword is its sheer depth, not the dizzying plot. The first episode introduces a slew of new characters, some of which are, uh, written out swiftly, while others will stick around.

In many ways, it is a concave mirror of the first episode of the series, which established the 'loops' of the hosts. The difference is that most of the people are, well, people - flesh and blood humans. They don't have loops in the sense of repeated days, but they are absolutely trapped by them.

We caught glimpses of this world, the real world, before, but not much. So far, we really haven't seen much more, just the 1% and a glimpse into a bit of the underworld via Aaron Paul's Caleb. But the paths of greed, of fathers and sons, set loops in motion that are very, very difficult to break away from.

Delores brings revolution to the human world, and it will be interesting to see if any of the humans choose a path apart from the one programmed for them. The Delos family didn't, William changed his to greed and selfishness. Lots of new humans have new opportunities, a do the remaining hosts.

Dean is the author of the 3024AD series of science fiction stories. When not holed up in his office  writing, he can be found watching or playing sports, or in his natural habitat of a bookstore.