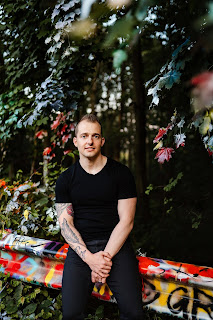 Ryan Van Loan served six years as a Sergeant in the United States Army Infantry (PA National Guard) where he served on the front lines of Afghanistan. He has traveled around the world with his wife, wandering Caribbean island haunts, exploring the palaces and cathedrals of Europe, and hiking with elephants in the rainforests of Southeast Asia. Ryan's forthcoming novel, The Sin in the Steel hits shelves on July 21, 2020. Today, Ryan lives in Pennsylvania with his wife and two dogs where he’s hard at work on his next novel.

Today he shares his Six Books With Us.

The Blacktongue Thief by Christopher Buehlman. It’s about a newly minted thief who has to pay off their student loan debts to the guild (relatable), a witch-in training, and a kickass knight with a war raven who go on an adventure together. It’s dark, but delightful in a gritty way that hits some of my favorite adventure fantasy notes. Fans of Nicholas Eames, Douglas Hulick, and V.E. Schwab will enjoy this one...unfortunately Christopher’s fantasy debut doesn’t land on shelves until next year.

I hate when someone names a book that’s not out on shelves right now, so let me also plug the book I read before this one: The Steel Crow Saga by Paul Kreuger. It’s a tight, standalone fantasy--think Pokemon in the immediate aftermath of World War II with half a dozen richly imagined cultures that reminded me of southeast Asia and a cast who all have mysteries they hope none discover.

I have to pick one? My understanding is that we’re getting books from the aforementioned V.E. Schwab, Jim Butcher, and Scott Lynch to name a few! Heh. I am hearing really great things about Katherin Addison’s (The Goblin Emperor) The Angel of the Crows. The title alone had me, but the premise--1880’s London with vampires and werewolves and angels and Jack the Ripper--made click pre-order as fast as I could.

So many! I grew up in a rural area so before I could drive, my only friends in the summertime were books and I loved reading so much that I was reading 5+ books/week from the age of 10 until right around the time I graduated college. I have a lot of old friends I want to see again. That said, I think I’m probably due for a Watership Down reread. That book taught me a lot about friendship and perseverance and in the year 2020, those are both important things to have in your life.

This is a great question! By which I mean it’s a hard one… N.K. Jemisin’s The Fifth Season was a book I immediately appreciated, but I had reason to re-read it recently and I was just blown away by what a master class it is in voice as a device for the story and how point of view can dramatically influence a scene(s). Then there are the themes of the book itself and the layers upon layers of craft that she wields throughout that build to an emotional crescendo that I saw coming, but still was utterly unprepared for. So my answer is I’ve positively changed my mind more positively!

A lot of the books I read as a child and young adult have had lasting influences on me, but as far as my writing goes I think it would have to be The Hero and the Crown by Robin McKinley. It’s a story about a royal outcast who sets out to prove her worth along with a put-out-to-pasture, lame, war stallion by fighting dragons. But it’s also a story about living with depression and finding ways to continue to make a difference even when you’re not sure that you matter at all, let alone your actions. It’s about finding your way through that fog in your soul. I am not a believer in AP English capital ‘T’ theme, but I am a believer in writing stories that matter. The Hero and the Crown does what I strive to do with every book: entertain with heart.

Why is my latest book awesome? In a word? Buc.

The Sin in the Steel is the story of Sambuciña ‘Buc’ Alhurra, the compellingly chaotic heroine who is part Sherlock Holmes, part young Indiana Jones and ALL herself. Buc shares a sisterhood with Arya Stark and Lila Bard of V.E. Schwab’s Shades of Magic. The first private investigator in her world, Buc’s too smart for her own good with a razor-sharp blade hidden up her sleeve and an even sharper tongue. She’s finally landed the case that will set her and her partner-in-crime solving, Eld, up for life...if they survive. With her wit and Eld’s sword they’ll have to best pirate queens, mages, and uncharted seas to solve a mystery empires have failed to uncover.

Unfortunately for Buc, the gods have other plans.

Unfortunately for the gods, so does Buc.

---
POSTED BY: Paul Weimer. Ubiquitous in Shadow, but I’m just this guy, you know? @princejvstin.