I have a somewhat truncated edition of Questing in Shorts today, owing to March being, to put it mildly, a Month. From next month I'll be focusing back on magazines and some of the small press collections I already have on my shelves, but for this month, let's see what I did manage to get through in the circumstances. Luckily, it's all rather good:

The Voyages of Cinrak the Dapper by A.J. Fitzwater (Queen of Swords Press) 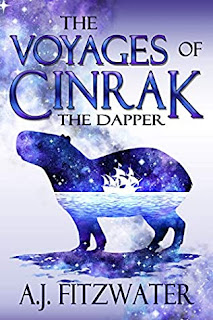 This collection, featuring a capybara pirate captain in a world full of anthropomorphic animals and magical creatures, is definitely more of a short fiction collection than a novel, but it's also a bit of an odd duck when trying to review as short stories, as there's a strong through narrative between each tale (or "tail") that makes it hard to speak about them individually. After an opening story (the aptly titled "Young Cinrak") that sees Cinrak take her first steps into piracy (in this world, apparently respectable career for those seeking freedom and a good community around them), the rest of the collection deals with her time as an established captain, taking on an increasingly mythological set of exploits, all while maintaining the affections of both opera prima donna Loquolchi, and the Rat Queen Orvillia, and looking after her diverse and entertaining crew of rodents and affiliated creatures.

Aside from the obvious parallels to its characters, there's something very soft and cuddly about these stories, in which krakens can become allies, stars can be freed from their royal captivity and sent back to the heavens, and pirates make for the most successful diplomats to all the various creatures of the earth (even the felines!) While it doesn't go particularly heavily into characterisation, its core cast all have enjoyable personalities and quirks to watch, and Cinrak herself is a delight at the heart of it all. The highlights for me came towards the middle, with the star-wrangling and celestial racing of "The Wild Ride of the Untamed Stars" signalling a shift into more magical adventure territory, and "Search for the Heart of the Ocean" following it up with an epic voyage which cements the compassion with which Cinrak, and the narrative around her, treats all the creatures in its orbit. I may have read this collection before "adventurous fluff in which everything is fundamentally OK" became one of the most important commodities on the planet, but my appreciation for it has only grown since then, and this is definitely a diversion I'd recommend to anyone who needs one at the moment. 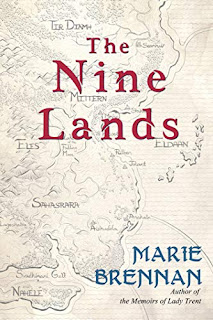 The Nine Lands is a collection of early stories from Brennan, all set in a shared world, although there's little overlap in the places and cultures covered. Despite being early work, the seven tales here are all highly enjoyable and, although its hard to get a full picture of the world as a whole, the individual pieces of worldbuilding and concepts are as accomplished and interesting as I'd expect from Brennan.

The stories themselves are relatively simple and self-contained in their narratives. Some are pretty bleak: "Execution Morning", the story of a Lieutenant dealing with a group of captured people from another culture who are due to be brutally executed in order to scapegoat them for their people's crimes, has very little in the way of hope or good choices for its characters, although it also offers a surprisingly sympathetic take for all involved. "The Legend of Anahata" tells the story of a King struggling to accept the impossible odds standing against his kingdom, and the sacrifices required from the Goddess. And "Sing for Me" is the story of a woman taken from her home in order to become the protege of a noble, and forced to develop painful talents she has no interest in making a name for herself over. In contrast, some of the stories do deal with forms of justice and belonging, from "Calling into Silence" and its story of a young woman cast out of her home and made to feel like a spiritual failure for her inability to complete a possession ritual, only to find the solution to her worries is rather closer to home, to "White Shadow"'s similarly spiritual tale of self-discovery among the shape-shifting Kagi people.

"Lost Soul"'s handling of a bard who has left bard college and is now struggling to find her passion within the magic of traditional music is a story that rivals some of the best musical stories of Sarah Pinsker, ending in a jam of epic proportions whose transitions and modulations you can almost hear through the invented song titles and descriptions. My favourite of the lot, however, is "Kingspeaker", in which a woman who has been raised to become the "voice" of a King, communicating his words to others as no others are able to bear the sound of him speaking, must find ways to reconcile her role with her broader duties to her Kingdom during wartime and the need to protect her young charge. Its a novel concept that dances between magical and cultural (though the author notes confirm that there is indeed something magical going on which makes the protagonist's role vital) and though the story is pretty light even for this collection, its a decent vehicle to showcase the concept and characters. Though it's hard, from an outside perspective, to automatically see that these stories belong to the same world, there's a common thread of highly accomplished worldbuilding which makes this early collection a worthy escape, especially for those who enjoy snippets of high fantasy in short fiction form. 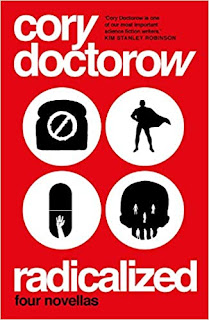 This is, I think, my first time reading Doctorow, and it's a promising start. The four novellas in this collection deal in some way with near future scenarios which tackle aspects of US culture, and some of the more dystopian elements of late capitalism. There's "Model Minority", a story in which Not!Superman tries to take on a case of police brutality against a Black man, only to find his motives, his effectiveness and his own "whiteness" called into question as an alien. "Radicalized" deals with a man who finds comfort in an online community for men whose family members are suffering from cancer and whose insurance won't pay for the treatment which would save them. In "The Masque of Red Death", a man who has created what he considers the perfect post-apocalyptic survival community has his assumptions severely tested. Having sent away the family of one of his carefully selected co-survivalists, and learned a hard lesson in going up against an equally well defended other outpost and discovering what rampant post-apocalyptic gun violence actually looks like, it's illness (cholera, in this case) which really brings the realities of crisis survival home, and there's an interesting progression between the carefully curated image the protagonist puts forward at the beginning of the crisis, and the raw unpleasantness of the experiment's end.

The best story here, however, is "Unauthorized Bread", a story which creates an entire community of refugees living on the "poor floors" of a new build luxury apartment block, whose lives are dictated by the smart appliances installed in their flats which force them to use particular marked-up products to be compatible with them, or go without. When Salima's toaster company goes bankrupt, she finds a way to jailbreak it and toast all the bread she wants, but sharing this knowledge among her community sends them up against the system in a way she's not entirely sure she's prepared for. By turns chilling and heartwarming, and with a great supporting cast, Salima's story offers a terrifyingly plausible vision of a future where autonomy must be paid for, while also showcasing the hope and ingenuity that people can deploy against such systems.