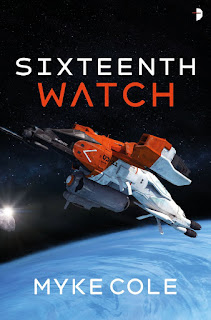 Myke Cole is an established author of military fantasy, but this is his first published science fiction book, and it takes the military genre into an institution that's often overlooked: the coastguard! What's more, this is one of two coastguard-focused space books releasing at nearly the same time (the other being K.B. Wagers' A Pale Light in the Black, which I'm really looking forward to). My knowledge of coastguard responsibilities and operations, and of maritime security in general, being extremely limited, I went into Sixteenth Watch with relatively little in the way of expectations, and was pretty taken by the brand of MilSF that I did get from it, with a few caveats.

In the world of Sixteenth Watch, humans are in the process of colonising and mining the moon, but political tensions from Earth have followed them over, and both China and the USA are now vying for positions which let them capitalise on the new territory's resources, particularly supplies of Helium-3. Both the US navy and the coastguard have been deployed into space as an extension of their regular duties, while the People's Liberation Army Navy (PLAN) protects Chinese space. With smuggling of Helium-3 on the rise, tensions are rising on both sides and the Coastguard is increasingly seeing itself pushed out by the Navy and the Marines, due in no small part to more effective PR about who would be better at maintaining US "territorial" boundaries.

Enter Jane Oliver, a coastguard captain whose only tour of duty in space gets cut short during the book's lengthy prologue, in which a mission goes terribly wrong and ends up claiming the lives of a number of servicepeople, including some extremely close to her. Understandably, Jane hasn't really recovered from the trauma of this, and has since been serving in a quieter position - which still very much takes advantage of her skills - in the training facility back on Earth. Of course, if we were to leave Jane alone to quietly get over things this would be a very short book, and sure enough it becomes clear that only Jane is qualified to take on the very specific mission needed to reinvigorate the coastguard, prove to the President that they're the right force for the job of maintaining peace on the moon, and stop the world from sliding into all-out war between the two powers.

And so, Oliver (who, true to military convention, is referred to by her surname throughout the book - confusing for the first few pages, but you very quickly get used to it) hops back on a shuttle to the moon, in order to lead the coastguard's most elite force in the event of the year: the military's annual "Boarding Action" exercise, where teams compete against each other to demonstrate how well they can execute protocol in spaaace. This annual exercise, which involves all the relevant law enforcement bodies present on the moon (including the post office, and, yes, I am taking recommendations for your favourite "space posties" series right now), has somewhat inexplicably become a big event back on Earth, and has been won for the last several years by a team of extraordinarily talented marines. In order to get some positive press and the ear of the president, the Coastguard has decided that it needs to win this year's competition, and that Oliver, in just three months, is the woman to whip their own equally talented but more fractured team into shape.

It's tough not to love Oliver and the rest of her core crew, all of whom fill tropey but satisfying roles within the team. There's Ho, the snarky but competent and charming second-in-command, who comes with Oliver to the post; Chief, the put-upon senior NCO who needs to learn to do things less by-the-book; McGrath, who worked with Oliver in her previous mission-gone-wrong and is in the position where he gets shot a lot; Pervez the hotshot but insubordinate coxswain (i.e. she steers the ship), and Okonkwo, quiet engineer who learns to stand up for himself. It's a quietly diverse group of people, and the commitment to showing women and people of colour at all levels permeates the book, though "the Chinese" remain a completely faceless and unified enemy force throughout (of course, it's realistic that Oliver wouldn't exactly have a direct line to her PLAN counterparts, but it's still a little jarring). Added into the mix are a range of more senior rank people who more or less believe in Oliver's methods and give her a hard time accordingly, and the internal interactions are, if a little predictable but enjoyable in their routineness. The fact that the coastguard setting means that the crew's very military life and purpose is about maintaining peace and avoiding the use of force makes is a refreshing set-up, allowing for Oliver to be a sensible, "let's not go to war for the sake of it" type of military commander with a rather different relationship to more hawkish seniors and adding nuance to her renegade status: she is, after all, upholding the organisation's mission to a far greater extent than those willing to take the Navy's lead. Peacekeeping in books is always something I'm interested in, and the premise of the book being about military measures to avoid war is one that I thought held great promise.

Whether it delivers on that promise is likely to be dependent on how one feels about military science fiction in general, and the amount of time one wants to spend thinking about successful boarding manoeuvres and how they impact on the psychology of each team member and the cohesion of the squad as relayed through the main character. There's a lot of talk of a process which involves nipples (not that kind) and cutting perfect holes out of spaceship exteriors, as well as some close quarters spaceship battles that were a bit hard for me to picture, and while I'm very impressed that Cole was able to write possibly the first non-erotic speculative novel by a man which had a reason to use the word "nipples" as much as it did (again: not that kind), these process elements did leave me cold at times, particularly during the sections where the squad is entirely focused on the Boarding Action competition and not on actual callouts, or the wider impact of their mission on Lunar Politics. The genre also informs the ending, which has Oliver pull off a manoeuvre which has very little to do with peacekeeping (though its impact is another story). It's satisfying on one level, but I was left wishing that the payoff for centring the coastguard in this book ended with something a little more sophisticated than "hey, there's another branch of the military and they wear distracting orange!" That said, there's clearly a lot more story to be told here, both in the characters' interactions (and where they end up at the ending) and the political factors, and I'd like to see Oliver and the crew's role play out over a longer series.

If you're after a military science fiction that offers all the standard satisfaction of the subgenre with an interesting new angle, Sixteenth Watch is a book to look out for. While it didn't win me over to the excitement of boarding action in general, its characters and many of the wider plot strands kept me reading right up until the end. I'm keen to see more in this universe and I'll definitely have Cole among my authors to watch in future.

Baseline Score: 7/10
Bonuses: +1 A space coastguard whose mission and values were refreshing and engaging from the start; +0 uses "nipple" a lot without being weird about female characters (I can't actually award points for that, but I wanted to note it anyway)

Penalties: -1 Uneven application of the stakes means some set pieces are a lot less engaging than others

POSTED BY: Adri, Nerds of a Feather co-editor, is a semi-aquatic migratory mammal most often found in the UK. She has many opinions about SFF books, and is also partial to gaming, baking, interacting with dogs, and Asian-style karaoke. Find her on Twitter at @adrijjy.Reference: Cole, Myke. Sixteenth Watch [Angry Robot, 2020]
Posted by Adri Joy at 12:00:00 AM