The Great Escape: Books to Escape Into

Need them to be available as e-book, for a variety of reasons?

The following series are all available as e-book, they'll all suck you right in, and we've all earned some escapism. Because I'm the person who made this list, the science fiction books on this list are "soft scifi" - relationships, feelings, found families. Lots of science, yes, but lots of other things too. These are my comfort reads. 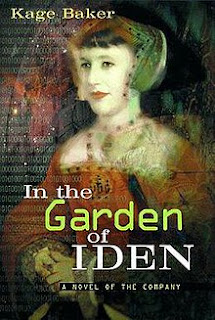 Kage Baker's Company series offers time travel, immortal cyborgs, the long game, romance, world travel, humor, and ten books to keep you busy. The first book in the series, In the Garden of Iden, follows young Mendoza as she survives the Spanish Inquisition and the surgeries that will make her into an immortal cyborg. Surviving being in love, well, that’s another matter entirely. Enjoy the teen angst, and grab some tissues. The second book, Sky Coyote, is much lighter and much much funnier, I promise. Oh, you’ve already read this series?  Read In the Garden of Iden again, there are so many hints there that I missed last time!

Like a good heist? Give Scott Lynch's The Lies of Locke Lamora a whirl. Young con artist Locke Lamora pulls stunts, cons, and long games that even the gods wouldn't dream of. But one of these days, his past is going to catch up with him and his crew. How long can he out run it? And how much can he steal along the way? This series is chock full of heartwarming friendships, intrigue, swear words, wry humor, and unrequited love. Characters are brave, loyal, and have friends in all the right places, except when they don't. Highly recommended for fans of The Witcher.

You want a heist, but in the future? You're sure to enjoy Derek Kunsken's The Quantum Magician and The Quantum Garden. Genetic engineered new races of humanity, a religion gone horribly wrong, galaxy spanning governments, and a con artist who can see quantum physics at the molecular level. Pick these books up for the science, get hooked on them from the excellent characters, the incandescent plot, and the rapid fire pace.

How does a space opera series that’s heavy on politics, melodrama, humor, and romance sound? If that got your attention, you’ll be pleased to know that Lois McMaster Bujold’s Vorkosigan Saga now has 20-some novels. Even better, if you read these out of order, you'll be ok. Download the first two or three, see what you think, and then bounce around to whichever ones look interesting. It's been a few years since I read a Vorkosigan novel, and no, I haven't read anywhere close to all of them, and yes, I read them in random order. And yes, there's a reason McMaster Bujold has six Hugo awards.

Your school age kids need something too, and what better than something you can read with them? If they haven't discovered this heartwarming coming of age story yet, the whole family has just enough time to read Carlos Hernadez's Sal and Gabi Break the Universe before the second book comes out in May.  When a pre-teen uses his skills as a magician to hide his ability to manipulate space time, who better to help him out than his cheeriest (and nosy-est!) classmate? Also: middle school hijinks, unusual families, the best Cuban food you've ever had, and characters who'll make you feel like you're walking through sunshine.  If you don't have any children in the house, read this for yourself. You can thank me later.

When you’re done with these, let me know, I’ll give you some more. In the meantime, what are your comfort reads?
Posted by Andrea Johnson at 12:00:00 AM