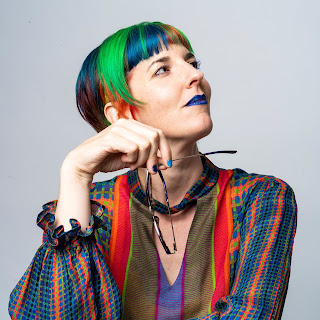 Corry L Lee's debut novel, Weave the Lightning, will be available in early April,  and depending on where you live, this is just in time for thunderstorm season!  Elemental magic, revolutions, fascism and secret police, romance, and  treason hiding in plain sight.  Political intrigue, propaganda,  passionate characters, and people realizing how far they'll go for what they believe in. And did I mention, magical storms that are returning decades ahead of time? Talk about climate change!

You'll hear more about it in the interview, but Weave the Lightning's unique magic system really has my attention!  It's not the specifics of the magic system I'm obsessing over, but how and when magical items can be made . . . and how the society begins to depend more on technology when magical items can't be made. What if you'd been born at the beginning of a Storm period, and known magic your whole life?  What if you'd been born a hundred years into a non-Storm period, and witnessing a magical item being made sounded like a legend? I'm intrigued by this society, that can change so drastically over time.  Add in a fascist regime, and you've got a  recipe for a wild ride!

Corry L Lee has a PhD in Particle Physics from Harvard,  where she studied antimatter and what happened in the first microseconds of the universe.   Her short story "Shutdown", won the Writers of the Future award. She currently lives in Seattle, but can often be found at science fiction conventions around the country while she completes The Storm's Betrayal,  the sequel to Weave the Lightning.  You can learn more about Corry at her website, Corrylee.com and by following her on twitter at @CorryLLee.   If you catch up with her at a convention, she might even let you join the Lightning Gang!

Read on for my conversation with Corry about where her ideas for Weave the Lightning came from, how she developed the magic system,  her favorite scenes to write,  science fiction conventions, physics, and more!


NOAF: Weave the Lightning takes place in a Russian-inspired world. What made that such a fun and interesting world to play in?

Corry L. Lee: I met a man who'd recently moved to the U.S. from a former Soviet state, and I asked him what he thought. "It’s great," he said on this sunny afternoon in L.A.. "Here, the secret police can’t break into your home in the middle of the night and arrest your family."

That conversation formed one of the first seeds of Weave the Lightning, and got me thinking both along Russian lines as well as considering the effects of totalitarian regimes. Making the regime fascist let me explore what made people - who would consider themselves good people, who might even be kind and helpful in the right circumstances - enthusiastically back a system that did awful things.

I love characters who believe strongly. Fascism let me have principled, "good" people on both sides of the State's definition of "right." Then I forced those people to need each other, to have to work together, and to examine what they'd believed without question all their lives
.
NOAF:  What were some of your inspirations behind writing this novel?

CLL: I love when secondary worlds make deliberate choices about the lines people create to divide "us" and "them" rather than just carrying over our society’s cultural baggage. I wanted equality around gender and sexuality, so I built that in from the ground up through the magic system and its influence on society.

NOAF:   State controlled mages, storm magic, I don't know much yet about this magic system, but I already love it! What can you tell us about the magic system, and how it works for the mages and the populace?

CLL:  When developing Weave the Lightning's magic, I had in mind "crunchy," well-understood magic systems like you see from Brandon Sanderson. But having just finished my Ph.D. in physics, I wanted to avoid too much scientific rigor because it felt like "real work." Bridging those desires meant creating well-defined rules with space inside them for the magic to be mysterious and unpredictable.

I also wanted technology to develop alongside magic.

I chose to have specialized imbuement mages create magical objects—objects which can persist and be used by anyone with a little bit of magic and the right training. This opens magic up to more people and lets it be used more like a technology.

Imbuing a new object, on the other hand, requires being struck by magical lightning, which happens only during a bozhskyeh storm—and there's the catch. Bozhskyeh storms occur on a cycle: for 50 years, magical lightning makes new imbuements possible; for 150 years, storms carry only electricity.
So there's a push and pull between magic and technology, and a difference in how you train mages depending on where in that cycle they live.

As for the crunchy details of how to create or use magical objects... that's a subject for another post. 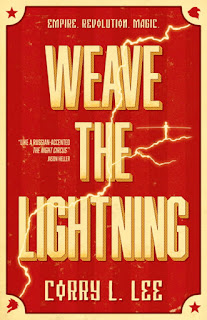 NOAF:   What was your favorite scene to write?

CLL: I love writing scenes where strong characters with conflicting goals and ideas have to somehow get on the same page (or close enough to it) to work together.

Avoiding spoilers, writing Celka and Gerrit first hashing this out was great fun.

NOAF:  And YES, there is a sequel in the works! What's been your experience so far, writing The Storm's Betrayal? How is writing book two different from writing the first one?

CLL:  Writing The Storm's Betrayal has been a delight. We get to know the characters better, expand the world, and deepen the moral complexity. Plus, I've added a new point of view, someone who I think you'll love.

It has also been a challenge in revision. Some of what I thought would work fantastically just... didn't. But that's the great thing about revision. My readers will just get to see the good stuff!

NOAF: You've attended and spoken at a number of science fiction conventions. What are your favorite types of panels to be on?

CLL:  I really enjoy heckling the... erm, let's call them old guard. Respectfully heckling. If I disagree with someone, I won't nod meekly and let it slide simply because they have seniority. Progress comes from challenging ideas, from engaging in open dialogue, and being willing to change one's mind. I love conversations like that—whether in small groups or on a panel.

Since I'm a physicist, this often comes up regarding how correct one's science "must" be in speculative fiction, but I've gotten into disagreements about a lot of things that other panelists hardline on. Fundamentally, there are very few "rules" that I believe must be adhered to 100% of the time; and, frequently, techniques that work amazingly for one person fail for another.

People are quick to expound upon what others must (or must not) do. Whether that advice centers on what a "serious" writer looks like, how science "must" be used, or what a person "should" (or should not) write, you an count on me to challenge those absolutes. There are as many ways to be a great writer/reader/fan as there are ways to be human.

NOAF:  The Particle Physics section of your website gives an excellent overview of the research you've been involved with. What got you into physics? How has your career in physics effected your fiction writing, if at all?

CLL:  I always liked math and science, so when people (loudly and repeatedly) told me that I could never make a career out of writing, I shrugged, kept writing, and studied physics. I smashed electrons and anti-electrons together to create conditions that haven't existed in nature since the birth of the universe. I discovered new decays of a particle that only lives for miniscule fractions of a second. In the process, I learned how to think like a scientist, how to question assumptions and listen to feedback, and how to rapidly assimilate new information—all of which have been immensely helpful in writing.

Specifically, my science background gives me a unique perspective on building magic systems. Magic in Weave the Lightning is complex, but it feels organic and grounded—like it would if it were a real science.

NOAF:   What in the hell is CP Violation??

CLL: Haha. The big picture? It's a key component in a subtle difference between matter and anti-matter.

You've probably seen Einstein’s famous E = m c-squared equation. What that equation means is that energy (E) can be converted into mass (m). (Ignore "c", it’s the speed of light, and physicists ignore it all the time. It’s there to make the units work out.)

What this equation means for the universe is that, when the Big Bang happened, energy got converted into matter and anti-matter equally (there's deeper physics at work that makes it so that whenever you create an electron you have to also create an anti-electron, and so on)... which should mean that the matter and anti-matter can eventually meet each other, smash, and annihilate back into energy. (That’s how you power the starship Enterprise, after all.)

But there's this teeeensy difference between matter and anti-matter such that when they annihilate, there’s a tiiiiiny bit of matter left over. That matter is what forms our universe, our planet, and us. (Like I said, it’s really tiny :))

So our whole existence? It's thanks to CP violation.

That’s why I studied it.

NOAF:   Thanks so much Corry!  Good thing there was that extra bit of matter left over,  would have been an awful waste of energy otherwise.