A Queen in Hiding, Book Promotion, and Setting Expectations

A Queen in Hiding is Sarah Kozloff’s debut novel, an epic fantasy that “[imagines] a world awaiting the return of the queen” which is a nice riff off of Tolkein, though the novel shares little other DNA with Lord of the Rings beyond the author’s frustration that Lord of the Rings would not pass the relatively low bar of the Bechdel test.

That’s not what piqued my interest in A Queen in Hiding, though. I can be a sucker for a good piece
of marketing and Tor’s decision to publish all four books in consecutive months told me that the publisher, at least, thinks they have something special on their hands. It puts me in mind of the launch of Naomi Novik’s Temeraire series and Jeff VanderMeer’s Area X novels, to reference two series which could not be any more different except in their excellence. Naomi Novik is an interesting point of comparison because the back cover compares the series favorably to Novik’s Uprooted, which is another point in its favor.

Epic fantasy has not been a singular thing over the decades, but there has been a general and evolving shape to the genre over time. There are certain names that frequently come up during conversations about the epic fantasies of the late 80’s and early 90’s- names like Raymond E. Feist, David Eddings, Tad Williams, Terry Brooks, and Robert Jordan. There is a well earned stereotype of “farmboy fantasy” where a young man comes up from being a kitchen servant or farmhand only to discover their destiny as a man of power, whether that power comes from a magical heritage or their lineage as a long hidden prince destined to save the world or restore the throne of their land to prominence and heal the wounds of a broken nation. It’s a thing.

This is incredibly high level and doesn’t get into the nuance of the totality of what epic fantasy has been over the years, but those stereotypes were part of a definite trend and marketing push for what epic fantasy looked like. That trend gradually shifted to more complex and much darker and violent work. You would recognize names like George R. R. Martin, Joe Abercrombie, Mark Lawrence, Steven Erikson, David Anthony Durham. There was a tonal shift in the genre.

The “general shape of the genre” was never truly representative of the whole even as writers like Elizabeth A. Lynn, Jennifer Roberson, Janny Wurts, Tanith Lee, Tamora Pierce, Ellen Kushner, Kate Elliott, Melanie Rawn, Elizabeth Moon, Jacqueline Carey, Katherine Kurtz, and Katharine Kerr are so often left out of the larger genre conversation and history. Many of these women were writing fantasy with a greater depth and complexity than the novels that received the widest popularity. Fantasy is never just one thing, even when particular popular conversations may make the genre seem narrow. 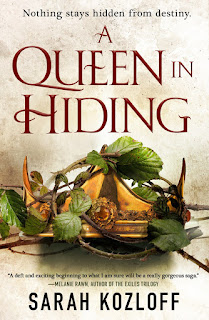 A Queen in Hiding owes a lot to the traditions of epic fantasy, more than just Kozloff’s inspiration by frustration over Tolkien. Despite the promotional comparison to Uprooted, Kozloff has written a novel which is a bit of a throwback to the feel of epic fantasies of the 1990’s. Kozloff does something different in the set up. Rather than set up a farm girl fantasy where there is a lost princess who doesn’t know that she was a member of the royal family, Kozloff lets that young princess know everything that she lost and grow up isolated from everything that she knew without understanding how she could find that path to regain the throne her mother was chased from.

Past that set up, though, A Queen in Hiding is very much that traditional fantasy novel with a hidden young royal growing up in a rural farm community, though with a look at what is going on in the wider world. It’s that look at the wider world that breaks with , with the ill-fated adventure of Queen Cressa and the scheming of Matwyck and glimpses into other nations with viewpoint characters introduced late in the novel.

I would generally consider it unfair, or at least unnecessary, to discuss a books promotional copy when talking about a novel but what the publisher has chosen to advertise in regards to A Queen in Hiding is vastly different than the novel Sarah Kozloff has written and I think *that* is something worth thinking about.

Here’s the copy in question:


Orphaned, exiled and hunted, Cérulia, Princess of Weirandale, must master the magic that is her birthright, become a ruthless guerilla fighter, and transform into the queen she is destined to be.

But to do it she must win the favor of the spirits who play in mortal affairs, assemble an unlikely group of rebels, and wrest the throne from a corrupt aristocracy whose rot has spread throughout her kingdom.

Tor’s marketing push suggests the novel is far more modern than it actually is. It also presents this idea that A Queen in Hiding is a more action packed novel focusing on the quest and active fight to regain the throne.

Reading A Queen in Hiding is an exercise in setting expectations because while the threat to Weirandale’s throne is evident from the start, the escape from the castle and the country doesn’t begin until even a quarter of the way through the novel and other major events come far later in the novel than the promotion would have you expect.

A Queen in Hiding is this uneasy blend of being a throwback epic fantasy that feels several decades older than it is while also being a somewhat more modern fantasy novel than many of the epic fantasies of thirty years ago - though writers like Tamora Pierce, Kate Elliott, Janny Wurts, Melanie Rawn, and many others would certainly have words with anyone suggesting the shape of epic fantasy in the 1990’s was even remotely monolithic.

That’s the tradition Sarah Kozloff seems to be working from. This may be a weird reference, but when I wrote about James Barclay’s Raven novels quite a while back, I wrote about how *those* books seemed to be in conversation with the novels published more than ten to fifteen years prior to Dawnthief (1999) rather than more contemporaneous novels. That’s where A Queen in Hiding fits into a larger genre conversation.

I get that comparing A Queen in Hiding to Uprooted makes sense from a modern popularity sense, but it’s just that I seldom see references to Elliott and Rawn and other writers who came up in that era as points of comparison and A Queen in Hiding would be a very good opportunity for that comparison. It’s just probably not as salable as comparing the novel to the more recent success of Naomi Novik’s Uprooted.

The problem, such as it is, is that however you set the expectation A Queen in Hiding doesn’t quite live up to it. This isn’t a modern fantasy novel despite its recent publication. It doesn’t stand up with the best of modern fantasy, but it also doesn’t reach the heights of those novels from thirty years ago either. A Queen in Hiding is good and solid novel, but it isn't well served by the uneven and inaccurate marketing and promotion.

What I’m most curious about is how the next three novels build on A Queen in Hiding and if they justify the publisher’s comparisons to Uprooted or if they at all justify my comparisons to Elliott and Rawn.