Microreview [book] A Pale Light in the Black, by K.B. Wagers

A Pale Light in the Black brings the talents of K. B. Wagers from far future to nearer term and nearer to Earth Space Opera, telling the story of the NeoG, the Space Coast Guard of the 25th Century. 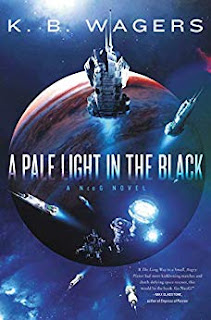 In the 25th Century, Space is still Big and Scary. The Navy is concerned with large scale issues, especially given that Humanity, bouncing back from the Collapse, has spread by means of wormhole technology to the Trappist system. The 25th Century humanity is actively colonizing and terraforming the solar system, too, with all of the issues--bandits, pirates, and the vagaries of space travel come into play. And just as in the modern day, a force is needed for when one’s spacecraft is flounding between Earth and Mars. And THAT is the story of the Near Earth Orbital Guard--the NeoG.

The story of A Pale Light in the Black runs along two Hoffmann Transfer Orbits. The first is the Boarding Games. From  the beginning of the novel, we learn about the Boarding Games, a multievent physical and mental competition between various branches of the armed forces (Navy, NeoG, Army, Marines, Air Force) that is watched by millions. At the beginning of the novel, we learn the NeoG, led by the crew of Zuma’s Ghost, has suffered a tragic close loss to Navy, and is looking forward to trying to get back in the finals next year, training hard for it in between their regular job.

Which leads us to the other orbit.. Lt. Commander Nika Vagin, one of the best swordfighters (did I mention swords are very useful in a world where projectile weapons are a hideously dangerous idea in space?) in the NeoG and an anchor for Zuma’s Ghost is getting a promotion and a transfer out to the Trappist system. For a found family and tight knit family, it's bad enough, but there is additional stress. For you see, transferred from a desk job by her request, Lt. Maxine Carmichael is her replacement. Yes, she’s one of THOSE Carmichaels, THE family in the solar system, since they have the patent and controls on LifeX, the treatment that has allowed post-Collapse humanity to have longer lifespans, and greater resilience to radiation during space travel. LifeX makes interplanetary (and beyond). So when in the course of their investigations, the NeoG stumbles upon what might be a dangerous knock off of LifeX, the new Lieutenant of Zuma’s Ghost suddenly has a case of divided loyalties, with healthy doses of intrigue, family secrets, and danger. The NeoG is often derided as “Space Cops” and for a Carmichael to join them instead of service to, say, the Navy or the Company, that is simply Not Done. So there are all sorts of crossed wires and tangled threads that eventually encompasses the entirety of the crew as well.

There is a lot to love in the novel, and it starts with the characters [Rosa, and Jenks Jenks Jenks]. Captain Rosa is a nicely complicated and well rounded character, she is happily married to a loving wife and two daughters, and she has a complicated relationship with her mother, her faith (which keeps her from accepting promotions that would send her to Trappist) and managing her found family on the Ghost. Rosa’s personal thread is a minor theme compared to the major themes of the novel, and it shows the range of things going on among the crew, and develops Rosa’s character nicely. However, the real star of the novel, often overshining even Lt. Carmichael is Petty Officer Atlandai Khan, better known as Jenks. A kid from the streets, adoptive sister to the aforementioned Nika, Jenks strides across the page with verve and strength like a latter day Lieutenant Starbuck. A wounded bird who doesn’t want to give up her heart, she’s feisty, fierce, fun, determined and the best person at individual combat not only in the NeoG but in all the forces, and has the wins in the Boarding Games to prove it. Whenever she is on the page, explosions and action and adventure are almost always quickly on her heels--except for those times where Wagers explores Jenks’ emotional beats, again making what could have been a one note character into a character with nuance and depth and the potential for growth.

The action beats are where the novel shines, too. Not only in the training sequences and within the Boarding Games themselves, but in the day to day job of the NeoG, the novel has a lot of fun with people in Space, including a harrowing spacewalk set piece. The author’s Indrana novels are set in the far future, on alien planets, ships and stations, but this novel has a much more cheek by jowl feel about Space and how people interact with it, giving it a different sort of feel than those novels in this regard.

The novel is delightfully geeky. Jenks is an enthusiast for our time period, and is definitely a Hoppy Frood who knows where her towel is. I laughed out loud when she made, of all things, a Babylon 5 reference. The novel knows and respects the traditions it is working in, and it leavens the novel with an even greater sense of fun, especially around the rambunctious Jenks. Too, the novel is optimistic. Yes, the Collapse, in the rear view mirror of their history was bad, an near extinction level event. But this is a society that has survived it, albeit by the skin of their teeth, and is now moving forward. The author does a great job throughout the novel as they seed bits of worldbuilding and information about what the world is like after the Collapse, and what has been lost. It makes for a sketched in enough future history for readers to fill in the gaps and imagine the rest, although history does play a role as a minor theme of the novel in another way as well.

There is a bit of a plotting issue that annoyed me. As mentioned above, there are two major plot threads that dominate the novel--the story of Lt. Carmichael, her family, LifeEx and the mystery that surrounds it, and the mystery that the NeoG works at through the entire book. This plot thread starts and resolves satisfactorily, even as there are hints that there is much more to be uncovered regarding what is uncovered when the NeoG turns over stones in the course of that plotline. It is the other plotline, though, the Boarding Games that does not resolve anywhere near so satisfactorily. This plotline starts off in the first chapter and the chapters are all labeled and titled in relation to the next Boarding Games. And yet, the absolute finale of the Games as depicted in the book doesn’t hook up with the beginning and the burning question posed at the beginning of the book, and so I was left vaguely dissatisfied as a result with that plot.

With that aside, however, A Pale Light In the Black is an entertaining and rollicking mid-term future Solar System Space Opera novel with excellent action beats, a wide variety of characters, a message of hope and resilience, The novel, as noted above, may take place “In space” like the Indrana novels do, but unlike those novels, mostly planet bound or set on huge spaceships, space stations and the like, A Pale Light in the Black gives a real and palpable sense of people who live and work and deal with the cold hard vacuum of space.

As a side note, I consumed this book in audio as well as print, and the audio narration by Marisha Tapera is excellent, throughout. This is definitely an audiobook that lends itself to long drives to eat up the miles.

A Pale Light in the Black shows the burgeoning strengths and wide ranging talents of one of the most exciting SF authors writing today. I look forward to reading more of their novels set in this verse and am hoping to see much more of the solar system. Space is Big, and we’ve only seen the tiniest fraction of this verse. More, please!

Bonuses: +1 for a rich and diverse set of engaging characters with strong personal plotlines and growth, +1 for excellent action beats, depicting what it is like to work in space evocatively.

Penalties: -1 The Boarding Games plot thread did not end and resolve quite satisfactorily for me