A young adult tale of near-future utopia with a neurodiverse, trans protagonist which punches way above its weight in its complexity and thoughtfulness 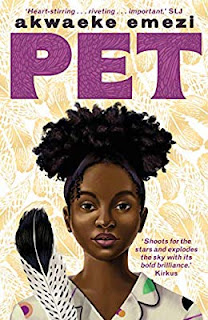 Pet is the second published novel, and first young adult book, by author Akwaeke Emezi, following their debut Freshwater. It's a book that I've been meaning to get my hands on for far too long, and I was incredibly lucky to have some wonderful humans of the SFF community send a copy my way. As a relatively short and easy read, even for its age range, Pet was also perfect for the tail end of yet another winter cold: yet its a book that packs a punch well beyond what its length might lead one to believe.

Pet is the story of Jam, a girl living in the town of Lucille in an unspecified future time when many of the social problems and prejudices of our own time have been solved. Prisons have been abolished, queer family units and gender fluidity are considered normal, Blackness is casually celebrated, accommodations for disability and neurodiversity are commonplace, and the town is generally shown to have moved on from the bad old days of repression and discrimination, and from the revolution that caused the shift a generation previously. To Jam and others of her generation, the events of the past are told through the lens of "angels" and "monsters": the former, the revolutionaries who led from behind and got the work done that caused the change; the latter, those who upheld the system or committed crimes under it, and who needed to be stopped in order to create the relative paradise that Lucille has become. To suggest that the work of this revolution wasn't complete has now become almost taboo, and the idea that monsters might still be living in Lucille treated as unthinkable by the older generation.

And yet, to Jam and her friend Redemption, monsters are still very much a subject for debate, and the question about whether any remain in their community comes to the fore when Jam accidentally summons a monster-hunting creature called Pet from one of her mother's paintings. The appearance of Pet surprises Jam's parents, not because they weren't expecting a monster-hunting creature to be summoned from a painting, but because the time for summoning monster-hunting creatures from paintings is, as far as they are concerned, over. And yet, Pet is convinced that a monster is out there in Lucille, and that they are active in Redemption's house. Its up to Jam and Redemption to figure out who they need to protect and how - no easy feat when the adults they are closest to are determined to keep the information they might need to understand what's happening away from them both, and Pet's own motivations for the hunt seem to go against everything they've been taught about forgiveness and careful finding of information, not to mention making sure they have enough time to process and support themselves through the challenging new aspects of human nature that come to light.

Pet's narrative structure is narrow and straightforward, with a relatively small cast of named characters representing the wider community of Lucille and its "angels". We meet Jam's parents, Aloe and Bitter; Redemption's parents, Malachite, Beloved and Whisper and some more members of his family; the town librarian Ube; and the old revolutionary-turned boxer Hibiscus and his wife Glass. Having a small, family driven cast underscores the particular sense of community being projected in Pet, giving us characters who are selectively flawed and blind while ensuring that - for almost all of the characters - that blindness is in pursuit of understandable goals. In doing so, Pet punches far above its weight, turning what could be a slightly speculative after school special into a story with a ton of nuance about what makes a community strong and, in particular, how adults can create environments for their children to flourish. That its done in a utopia that never stops feeling like a utopia makes the message even stronger: this isn't a group of people who are about to be punished for believing that caring, inclusive communities without brutality and abuse are possible, but one whose understanding of how to protect that environment is about to be challenged - a wake-up call, but one that errs very much on the side of a positive reading of human nature.

At the centre of this is Jam herself, a resourceful and emotionally intelligent young protagonist who is both trans and neurodiverse. Jam's trans identity is dealt with unambiguously and matter-of-factly at the start of the story: as a three-year-old, she made it clear to her family that she was a girl, and since then everyone has treated her as such, and she's had informed access to all the hormone blockers and treatments to make her puberty as a girl straightforward. Once Emezi gets that out of the way, there's no reason for Jam's trans identity to come up again as anything other than when its relevant to a description (for example, mentioning after she's been standing outside that her estrogen implant feels cold under her skin). Being trans, or non-binary (as Redemption's parent Whisper is) is not a point of complication or conflict in the story, because nobody in Jam's life views it as complicated or controversial. Her neurodiversity impacts much more on how she interacts with the world around her, but here too Emezi doesn't make it a point of conflict. Jam is shown as averse to speaking aloud, and therefore uses sign language and other methods of communication with other people when she can. The narration also has her use synesthesia-like descriptions combining emotion with physical qualities, such as when "fatigue [collides] with her body" or Pet leaves "a tang of pride" in her room. Disappointment slithers, and sadness is twisted but soft. Having not read Emezi's other work, I don't know if this kind of description is common to their style, but here I read it as an aspect of Jam's voice, bringing to life a perspective that felt very different from my own while being totally comprehensible. Jam's use of sign, and of thought-speech with Pet, offers further nuance to the book's themes about communication, as characters are shown adapting to her preferred communication methods and the importance attached to them (vocalising her words being the method that requires the most effort and therefore has the most weight) but unable to communicate more than fairy-tale simplifications of the state of the world before her birth.

Ultimately, Pet is a story whose surface simplicity has enormous, complex depths. As a utopia, this might be the most interesting book I've read since Ursula K. Le Guin's The Dispossessed, albeit one that doesn't go into great detail about how it's being upheld: problematising aspects of Lucille's social organisation without passing judgement on the people who developed it and their assumption that a better system was possible. It offers its protagonist a coming-of-age story about her place in the world that has nothing to do with her trans identity or neurodiversity, making it clear that her influence and voice on the wider community goes beyond any axis of self-acceptance. As a white adult cis woman, Pet is not a story intended for me, but it's a story I feel I really benefited from reading and I very much hope it finds its intended audience, and the rest of us along the way. Meanwhile, Emezi is an author whose future releases I'll be anticipating with great interest.

Bonuses: +1 gorgeous, evocative writing which brings characters to life without straying from an easy-to-read young adult style; +1 a complex, thoughtful story about community and coming of age

Penalties: -1 I could read so much more about the world of Lucille, even if it wasn't relevant to this particular story!

POSTED BY: Adri, Nerds of a Feather co-editor, is a semi-aquatic migratory mammal most often found in the UK. She has many opinions about SFF books, and is also partial to gaming, baking, interacting with dogs, and Asian-style karaoke. Find her on Twitter at @adrijjy.
Reference: Emezi, Akwaeke. Pet [Faber and Faber, 2019]
Posted by Adri Joy at 12:00:00 AM