Microreview [Comic]: Sonata vol. 1 — The Valley of the Gods

David Hine and Brian Haberlin's scifi adventure comic Sonata is a beautiful planet opera which has a hard time taking off. 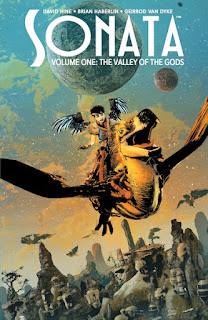 On planet Perdita (or alternatively Vianna), somewhere in the farthest reaches of the galaxy, two competing human civilizations have founded their own colonies. Their spaceships are able to reach it only once in a while when the worlds are favourably aligned, so the colonies of both the peaceful Ran and the less gentle Tayans have to mostly make do on their own.

These civilizations are polar opposites of each other. The Ran are peaceful, dinosaur-flying environmentalists who are on good terms with the less advanced ogre-like Lumani natives of the planet whereas the Tayans are into guns, technology, looking down on the "primitives" and, if needed, destabilizing the planet's ecosystem with huge dam constructions and the like. Obviously, the new inhabitants of Perdita/Vianna (both sides have their own name for their new homeworld) are made to not get along, even though the green and flourishing planet should be able to support them all. That is, if you steer clear of humongous mythical monsters known as sleeping giants, of course.

The story starts rolling when the Ran decide to sabotage the Tayans' new dam which deprives them and the Lumani of necessary water. The two factions are quickly on each other's throats, apart from two individuals: Sonata, the daughter of one of the Ran leaders, and Pau, son of the Tayans' bossman. The two teenagers end up adventuring together (along with Sonata's Lumani friend Treen) and becoming fond of each other, in addition to discovering that the Lumani are not the illiterate, unadvanced primitives everyone imagines.

So, let's see: strange worlds, intriguing aliens, a love story between characters whose races/civilizations are not getting along… For a contemporary science fiction comics series, it sounds quite familiar, right? Dismissing Sonata as a poor man's Saga clone would be a bit harsh but it wouldn't have hurt to spice it up a notch so that Hine and Haberlin's creation would stand out.

Haberlin's art is superb and it makes the world really come to life but the story itself feels like a fat stack of clichés. Even if it is a well-paced and entertaining story, the worn-out themes of star-crossed lovers and nature versus technology could really have used some twists and more imaginative and unexpected takes. Very few plot developments that the comic threw at the reader were things I did not see coming, and that is always disappointing. Only one thing which took place towards the end of the story (and which I won't spoil it here) seemed to take the tale to an interesting direction, and that was basically the set-up for the next story arc.

Hopefully the subsequent adventures of Sonata and Pau manage to lift them off the beaten track and make them really come to life. The first graphic novel Valley of the Gods which collects Sonata issues 1 through 6 did not succeed in establishing the series' main characters as anything other than two curious teenagers, so there's certainly room for development.

Nerd Coefficient: 6/10 – "still enjoyable, but the flaws are hard to ignore"