Welcome back to my Dragon Prince re-read! Last month we looked at Stronghold, the first volume of Melanie Rawn's Dragon Star trilogy and the fourth overall in the larger Dragon Prince sequence. The three Dragon Star novels are a sequel trilogy to Dragon Prince, but I maintain the story arcs across all six novels more accurately complete a single trilogy with a much more unified story than one might otherwise expect. I go into a little bit more detail about that in my write-up of Stronghold, if anyone is inclined for a refresher.

Up until this point, each essay in this Melanie Rawn re-read has actually been a proper re-read. Through the essays, I've reflected on novels that I've read before (in some cases, many times). Hence why I call this a "re-read" rather than giving it a series title similar to what I've done with my oft delayed Reading Deverry series. With that said, I'm not convinced that I've actually read The Dragon Token before. I remember having library issues regarding this novel and now that I own the full series I still have no recollection of anything that happened in The Dragon Token. There's a theoretical chance that I've read this before, but this re-read series has turned into (for one essay only) a first read.

It should go without saying that this essay will contain spoilers of the series so far, though I will attempt to limit (but not necessarily eliminate) those that touch directly on the final Dragon Star novel, Skybowl. You have been warned. 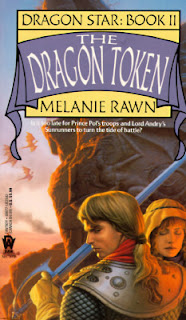 Stronghold ended with the death of Rohan. Even as Melanie Rawn has been building the importance of Rohan's son Pol and Pol's inevitable conflict with Andry, the true heart of the series, from Dragon Prince through Stronghold is Rohan. This has been his story, his dream of peace across the continent and the rule of law, his love story with Sioned. All of that was shattered with the invasion of the Vellant'im. Rohan's death was the impossible topping on the top of that bloody cake.

I don't think I mentioned Rohan's death when talking about Stronghold, but that was the emotional peak of the series. It came very late in the novel so there wasn't much time for other characters to react. Here, much of the first quarter (at least) of The Dragon Token features various characters responding to Rohan's death. Despite faradhi powers, there are still some cities / castles which learn much later than others, so Rawn is able to continue with the reactions. Hell, Sioned spends the first half of The Dragon Token drunk. That part, at least makes a lot of sense because Rohan was her partner of decades and that is a deep and personal pain (as is the grief of Chay and Tobin).

The thing is that Sioned is such a significant and strong character for so much of the series that it hurts even more to see her out of commission and apathetic from grief. Because Melanie Rawn does not offer a singular experience for female characters in her novels, Sioned's sidelining isn't as brutal an experience as it might have otherwise been in another novel. Sionell and Tobin and Hollis and Chayla and some of the daughters of Roelstra are all strong in various ways, that moments of weakness are just that - human moments.


For other people, perhaps. She had showed them a woman of power. They would treat her as such from now on. They would not know - and must not discover - that it was only something she had worn for a little while like a cloak or a crown. It was real, but it wasn't really her. The appearance was false, and the reality was just Meiglan - The Dragon Token.

It's that range of strength in the women of Dragon Prince and Dragon Star that allows a character like Meiglan to be so significant on her own rather than being nothing more than a stereotypically weak woman in an epic fantasy, she demonstrates part of the range of human experience - which is a thought that when written out sounds far more pretentious than what I intended. At her worst, Meiglan is just another character and perhaps an outlier in a series full of strong women. At her best, she is a desperately shy woman trying to overcome her own fears and to grow into the sort of woman she would like to be and that she sees modeled around her.

With that said, it can be frustrating whenever Meiglan is on the page because she often comes across as so much more childish than the other women even though she is an adult and that she is also a mother in her own right.  It's just that she is barely considered her own person, and more that she is somebody who needs to be protected.


Meggie, it's selfish of me. Sending you home. I want to know that there's someplace that hasn't changed, something I won't lose. I need you to be safe for my own reasons, love. I want to think of you there, and the life we've always had. What tall this has done to us - what it might do to the girls if it lasts much longer - it doesn't bear thinking about. - The Dragon Token

Don't get me wrong. There has always been a desire to protect loved ones throughout the series but that has generally been tempered with a (sometimes reluctant) understanding that most of those loved ones are people with agency and consequence and strength and sometimes it is important to let them take risks and do the things necessary to win a battle or a war or a conflict or whatever. That seems to go for everyone except for Meiglan.


Audrite scowled and sank back down onto the couch, exhausted. "Yell back at me, why don't you? Why are you being so nice?"

Chadic hesitated, then shrugged. "I'm worried about Ludhil and Laric, too, you know."

She glanced up sharply. She hadn't been thinking about their sons - but all at once she knew they were the undercurrent to her every waking thought. - The Dragon Token

In some ways this second series is about parenting and war and how everything is changed by war. The fears of parents made real. There's a scene later in the novel where the quote of the dialogue is not near as important as the scene itself. It's a young man (a boy, really) injured in battle and fearing that he disappointed his father, and it's a scene of a father comforting his son knowing that his son is dying. I'm sure that another time years ago it would have been something that I glossed over - but this time, with two small children of my own, it's one of the most perfect and painful things that I've read and I'm having a difficult time writing about it right now, let alone the first and second time I read the passage - because I had to read through it twice to make sure I caught what Rawn just did there. It was beautiful and perfect and painful.

I think that is as good a place as any to wrap up my thoughts on reading The Dragon Token for the first time. Moreso than any of the novels in the series so far, The Dragon Token is the most dependent on being familiar with the story and the characters and having some sort of emotional investment. It's smoothly readable, as are all of Melanie Rawn's Dragon Prince novels, but to a point, I'm not sure I truly missed anything significant by not reading The Dragon Token before now. I remember reading Skybowl and feeling like I missed something but going from Stronghold to Skybowl without The Dragon Token is an easier transition that one might think.

Next month: Skybowl, and the conclusion of my Dragon Prince Re-Read. Be there.