Hello, friends, and welcome to a new year of short fiction adventures! I'm back after a little unplanned hiatus at the end of next year, and ready to tackle what 2020 has in store - ready, that is, once I've finished with the desperate project of reading all the things for 2019. As a result, this roundup is going to mostly be a selection of stuff I've been reading to round out my experiences of last year's shorts, and having made a few sloooow novel choices recently (*glares at Black Leopard, Red Wolf*) I've found a lot of time to pick up magazines and anthologies in the time between, or in the middle of, longer works.

I'm expecting to jump into 2020 fiction with a vengeance next month, and to that end I'm in the process of mixing up my short fiction subscriptions for this year, partly for variety and partly to realign what I want to read and by whom. One big part of this is that I'm actively seeking out publications whose editorial staff are PoC and/or LGBTQIA+; if you have any favourites that you'd like to shout out, please do so in the comments below. I should note that I very rarely manage to read magazines that don't have some form of ebook available, so if you'd like me to check something out, that's sort of a prerequisite, but I have a few things on the radar that I'm going to attempt to make exceptions for.

Without further ado, let's get into the things: 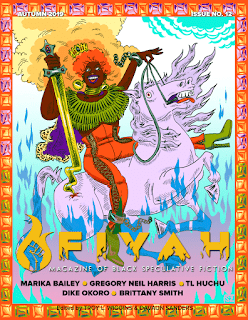 Of all the magazines I've kept up with over the last year, FIYAH delivers one of the most consistently enjoyable experiences, and this issue, "Chains", is another delight. As you'd expect, the issue takes a sensitive and resonant topic for Black speculative fiction and offers a quartet of stories which interpret it in  different and unexpected ways, with three short stories and a long novelette. Of the short stories, I very much enjoyed "The Midnight Hose", a creepy rural ghost story by Gregory Neil Harris in which two kids trying to take a shortcut through their weird neighbour's fields at night (what are you doing) come face to face with the legacy of sharecropping in a rather literal way. It takes all their adventurous resourcefulness to get themselves out, and to grapple with the ghosts of the farm's past (metaphorically and literally), in a story which brings a satisfying children's horror aesthetic and takes it to a more sophisticated level. Of equal note is "Reclaiming Tess", a more meditative story about a woman considering her family legacy after inheriting a bond with a minor god from her grandmother despite being considered the "weakest" candidate among her relatives (grandmother included). Tess' journey is heartbreaking, but the story does a brilliant job of showing us, in a relatively short space of time, where her true support network lies, while also painting the deeply complex emotions she has about the members of her family. "Corialis" - a story about exoplanet colonisation which deserves to be up there with "Semiosis" and "To Be Taught, If Fortunate" in the conversation about human adaptation for space - and "An Irrational Love", a retelling of the minotaur myth, round out the experience. I say it every time I review them, but: don't sleep on FIYAH, folks.

(Incidentally, I like to choose the first review based in part on which book or magazine cover I want showing up on our Twitter previews. Sometimes this is a tricky decision, sometimes an arbitrary one, but never have I been so sure about a choice than I am about putting Sophie Zarders' gloriously weird cover art for this issue. What on earth is going on there? I don't know, go with it) 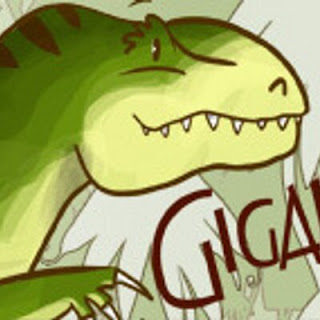 GigaNotoSaurus took a couple of breaks last year, but I've been slowly making my way through the six stories they published in 2019, and I'm halfway there. Of the three stories I've read so far, December's is particularly worthy of note: "The Devil Squid Apocalypse", by Alex Acks, tells the story of an elderly woman playing in a teen rock band when aliens happen to invade earth, destroying much of the population and leading the rest into internment camps. From its opening countdown - a device whose omniscient narration feels straight out of Douglas Adams or Terry Pratchett - this is a wild ride of a story, and Marcia, the character at its heart, is just wonderful. As an asexual Latina woman who has spent her entire life working hard for very little, Marcy has earned every last one of the fucks she doesn't give, and her post-retirement career as a rock guitarist comes about after an impromptu audition for her teen weed dealer's new band. The rest of the band, Cameron, Darnel, and Lang, all get their moments too, particularly once the invasion itself is over and they find themselves in an internment camp with a bunch of humans who have brought rather too much of the old order with them. Acks' story blends the terrifying, pulpy thrills of a hostile alien invasion with the very real social prejudices and hierarchies that come out when humans are under pressure, and distilling through the lens of a character who is bone tired of all of it makes for a tense, hilarious story that will keep you reading until the very end.

At the other end of the year, "Hand-Me-Downs" by Maria Haskins is a shorter-than-usual story for the publication, but it packs a huge punch into short story length. Tilda is a troll, the child of migrants who has grown up amongst humans who, while generally accepting, are all too keen to remind her of her differences even when ostensibly trying to help her celebrate her culture, and among whom she is warned that she can never practice her natural magic. As a talented dancer, Tilda is preparing to dance in a show which could be her gateway to a professional career, but everything about the performance she's being encouraged into feels stereotyped and wrong, and Tilda is caught between trying to pursue her passion at the expense of her integrity, or bowing to her father's demand that she stop dancing entirely in order to protect her dignity. As an audience, we're never in too much doubt about what Tilda's ultimate choice is going to be, but its still wonderful to watch her make it, and there are bonus points for a fabulous grandma who comes in at exactly the right time to help move things along. 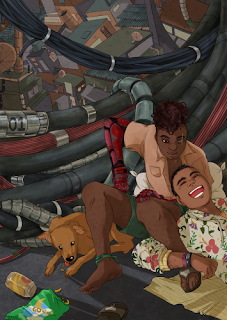 Strange Horizons' Brazilian issue, developed as a 2018 Patreon reward, dropped at the end of September, but the magazine's ebook production has been a bit delayed recently and I've only just got hold of it in my preferred reading format. I thus spent quite a while admiring the slice of life scene depicted in the art for "Replacement" (story by Isa Prospero, art by Juliana Pinho) without knowing much about the story itself behind it. The heartbreak of these kids' story perhaps even had more impact thanks to my familiarity: Marcos and Jô are kids from the favelas of Sao Paolo, in a future where the poor often make ends meet by selling limbs and body parts to the wealthy. Its a circumstance that entrenches discrimination against them, as their replacement limbs mark their status, and while Jô  has more or less resigned himself to his life, Marcos has managed to avoid most replacements until circumstances make it impossible for him to stay away any longer. As an extension of the very real poverty traps which exist in our world today, its a plausible and challenging science fictional world, told through a pair of characters its impossible to not want the best for.

"Replacement" sets a high bar for the remainder of the issue, but its a strong one from start to finish. "Progression" by Heitor Zen and "Spider" by Sérgio Motta are both weird as hell and great for it, and "Ajé" by H. Pueyo offers an outwardly gentle but deeply challenging story of love and magic, both lost and found, with a father and son visiting an old friend of the father's only to discover that this friend has lost her connection to magic and gained an abusive relationship. In trying to find a way out for both her and her daughter, the story explores themes of connection, self-actualisation and intergenerational sacrifice, ultimately having its characters make choices that are both frustrating and sadly believable. The quiet heartbreak of "Ajé" is followed by the delightfully snarky flash piece "High Hopes" by Kali de los Santos, which offers a fast-forwarded look at the development of Brazilian society following the introduction of flying cars. Its a great way to tie up a really strong set of prose stories, and this is a collection of work that I'd certainly recommend to anyone looking to increase the geographical scope of their reading to include a scene that rarely gets much coverage in English-language publications. 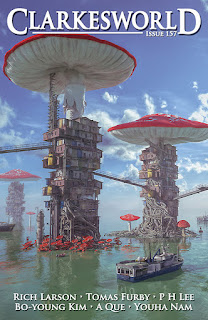 Most of Clarkesworld's October issue was underwhelming for me: there are several stories that end with final lines that skirt very close to "there was so much work to do", which is by far my least favourite trope in short fiction and guaranteed to make me very grumpy about the story that preceded it. Even the ones that don't, like "The National Center for the Preservation of Human Dignity" and "Song Xiuyun" end in some pretty depressing, final places, and while I appreciated the quiet, stoic desperation of these stories and their technologically advanced but emotionally stunted futures, both left me feeling pretty miserable. I persevered, however, and was rewarded at the end of the issue by the excellent "How Alike Are We", by Bo-Young Kim, Tr. Jihyun Park and Gord Sellar. This is a novella about a rescue mission to Titan which goes wrong when something ends up fragmenting the crew. What makes this novella compelling is that it's narrated by the ship's Crisis Management AI, which has been downloaded into a human body at its own request but, due to a memory fault, now can't remember why it would have made the request in the first place. The claustrophobia of the shipboard setting and the unsettling insistence of the AI that there's "something missing" from its understanding - something beyond the memory issue - add up to a tense mystery whose resolution, when it comes, is at once strikingly simple and surprisingly powerful. It's a story that has grown on me the more I think about it, and well worth the time - although it carries a content warning for attempted sexual assault.