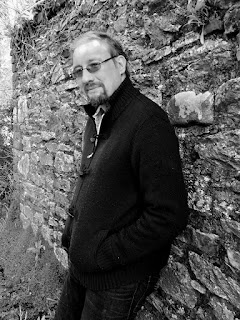 Gareth Hanrahan’s three-month break from computer programming to concentrate on writing has now lasted fifteen years and counting. He’s written more gaming books than he can readily recall, by virtue of the alchemical transformation of tea and guilt into words. He lives in Ireland with his wife and children. Follow him on Twitter @mytholder.

Today he shares his Six Books with Us...

Robert Macfarlane’s Landmarks, a series of essays/vignettes/self-indulgent anecdotes about landscapes and language. I don’t know if I really like or really hate Macfarlane’s books – this is the second of his I’ve read (after Underland, which was about underground spaces). The format seems to be ‘really interesting thoughts about words and environments, conveyed by him talking about his eccentric friends’. (I suspect the answer may be that I like Robert Macfarlane’s books, but am somewhat irritated by Robert Macfarlane’s presence in his books.

Susanna Clarke’s Piranesi. I know next to nothing about it, but it’s (a) Susanna Clarke and (b) about Piranesi, who’s my to-go artist when I want to be pretentious about D&D dungeons, which is pretty much ALL THE TIME.

I’m doing a podcast soon about Poul Anderson’s Three Hearts and Three Lions, and I recall really enjoying it when I read it years ago. I’ll have to reread it over Christmas as research, and I’m hoping it holds up.

Jeff Vandermeer’s Shriek: An Afterword. I loved the first Ambergris book, City of Saints and Madmen. I picked up Shriek next, and found it utterly incomprehensible and dull. Years later, I got the third book in the sequence, Finch, and loved it. I then gave Shriek another try, and it felt like a completely different book. I was astounded at myself for hating it the first time, and I’ve no idea why I bounced off it so hard.

The Lord of the Rings, predictably – but that book set the course of much of my life. Tolkien showed me the virtue of serious play and creativity for its own sake.

The Shadow Saint, the sequel to last year’s The Gutter Prayer and the second book in the Black Iron Legacy series comes out in January from Orbit. It’s got a fantastical take on electoral politics, lots of espionage action and intrigue, empires clashing in heaven and earth, murderous merfolk, awkward dinners, cannibal gods, militant architecture, and a wonderful cover by Richard Anderson…