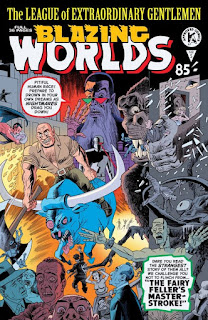 Alan Moore is finished with comics. A scent of nostalgia in the air suggests that he may have announced something similar before, but this time it seems final. The British comics writer legend and his co-creator, illustrator Kevin O'Neill, are both ending their respective careers with the final six-issue instalment of The League of Extraordinary Gentlemen saga which hit the stores last year and is about to be published as a graphic novel any time now.

In short, the series goes out with a headscrathing boom – a nice way to end anything, be it comics or careers.

It's incredibly hard to sum up the 20 years of The League of Extraordinary Gentlemen in any meaningful way for those who are not familiar with it. The crossover steampunk adventure comic with established Victorian characters and literary jokes quickly evolved into a tale incorporating scenes of harrowing sexual violence, wild experimentation and the most abysmally awful film adaptation of a comic in living memory. (Speaking of confusing ways to end careers, the movie was the last screen appearance of Sir Sean Connery who took the job after feeling bad for not agreeing to play Gandalf in Lord of the Rings.)

In 1999, the first miniseries Volume I laid the foundation for an intriguing storyworld: Bram Stoker's Dracula, Jules Verne's Twenty Thousand Leagues Under the Sea, H. Rider Haggard's King Solomon's Mines, Robert Louis Stevenson's Strange Case of Dr Jekyll and Mr Hyde, H.G. Well's The Invisible Man, Arthur Conan Doyle's Sherlock Holmes stories and numerous other Victorian fictions are actually situated in the same alternate history. In this steampunk world, the British government assembles a team of operatives with extraordinary abilities to deal with exceptional threats to the empire. Wilhelmina Murray (or Harker), Captain Nemo, Allan Quatermain, the shapeshifting Dr. Jekyll and an invisible sex criminal form something of a Victorian-era Justice League to fight off Dr. Moriarty, an invasion or Martian tripods and what have you.

Along the way, the comic commented on Victorian attitudes, played with metafictionality and propagated Moore and O'Neill's distaste for authorities and superheroes. The first two miniseries published in 1999-2000 and 2002-2003 were mainstream successes – even if the metafictional play becomes quite complex sometimes, they are highly accessible stories. After all, reading Moore's episodic prose bonus features describing wonders from different corners of the storyworld and weaving together elements from hundreds if not thousands of myths, stories, novels and other sources from Moomins to House of Leaves were not necessary for enjoying the main storyline.

After Volumes I and II Moore and O'Neill could probably have kept milking the steampunk cow for a long time, but they chose to move the story in new directions instead. In the graphic novel Black Dossier (2007), they jumped to Britain in the fifties after the downfall of Orwell's Big Brother government, and in the album trilogy Century (2009-2012) they race through the 20th century, visiting Jack the Ripper years, the trippy sixties and ending up in the 2000s with computers, endless wars in the Middle East and Harry Potter who has become Antichrist.

In addition to the crazy plot points, Black Dossier and Century experimented with the comics storytelling. For the Black Dossier, Moore wrote a "disappeared" Shakespeare play in Shakespearean pentameter and recorded early faux rock and roll songs for a vinyl record to come with the album, whereas O'Neill's drawings representing the magical dimension of Margaret Cavendish's proto scifi novel The Blazing World have to be read with red-and-green 3D glasses. For the first Century album, they decided to go with a comics adaptation of Bertolt Brecht's socialist agit prop musical The Threepenny Opera – you may want to read Century: 1910 in case you're interested in why one of the characters is called Pirate Jenny in the new Watchmen TV series (but don't fall off you chair when the comics final apocalyptic fight scene turns into a burlesque cabaret show).

So, this sets the scene for Volume 4: The Tempest, the final volume in the series.

It starts where Century trilogy ended up: satanic Harry Potter is defeated, the misogynist MI5 agent and Black Dossier's antagonist James Bond is old and debilitated and the last remnants of the League – Mina Murray and genderbending Orlando from the Virginia Woolf novel of the same name – are adventuring together again. They are joined by MI5 leader Emma Night (from the British TV show Avengers) who chose to switch sides and team up with the good guys instead of government spooks.

To sum it up, all seemed to be more or less in order in the storyworld, all thinkable storytelling fireworks were shot in the previous volumes and the contents of most of the classics of imaginative fiction have already been crammed somewhere in the series. The obvious question was "is there anywhere left to go now?", but it seems that we didn't really have to worry about that.

After going through Victorian adventure fiction in Volumes I and II, a mishmash of earlier cultural history, Orwell and detective fiction in Black Dossier and occult stuff and children's fantasies in Century, Moore and O'Neill tackle the history of comics and superheroes, especially British ones.

It's an interesting choice for sure. Mostly The League of Extraordinary Gentlemen has steered clear of the cultural history of its own medium, even if it has taken a deep dive in the cultural history of practically everything else. Of course much of Moore's bibliography has been thematizing comics history extremely hard – think of works like Watchmen, Miracleman (formerly Marvelman), Whatever Happened to the Man of Tomorrow?, Supreme and Tomorrow Stories – and a great chunk of Kevin O'Neill's body of work consists of brutal, polemic satires of superheroes and comics heroism like Nemesis the Warlock or Marshal Law (frequently created with writer Pat Mills). There is no shortage of comics going through the history of American superhero comics with some kind of a meta sensibility, but outside US there's still new ground to be covered, it seems.

Also, it turns out that discarding the super-misogynistic "Jimmy" Bond as a key threat was too quick a conclusion. Agent 007, even if he is barely alive and glued to a wheelchair and a breathing apparatus, is able to take back control of MI5 and raise some serious hell. He tracks the hero trio's journey to Africa where they take a dip in the magic pool of R. Rider Haggard's stories restoring their youth. With his henchmen (who are actually the Bond actors from different James Bond movies), Bond follows them, regains his young and able body and, being the murderous and sleazy character that the original Bond is, blows up the pool with a nuclear bomb, butchers Night's allies within the agency and gets ready to attack The Blazing World with weapons of mass destruction.

The plot is again a convoluted mess with Murray, Orlando and Night visiting different magical realities, meeting fictional characters like Prospero from Shakespeare's Tempest and teaming up with original Nemo's great-grandchild Jack Nemo. We see fairies performing the fictional Shakespeare play of Black Dossier, have to again tinker with 3D glasses and get to try to make sense of extremely obscure intertextual references. Which is what one would expect of the finale of The League of Extraordinary Gentlemen, I guess.

On the one hand, it's hard to not think that the comic goes a bit overboard with this stuff if you practically have to read it with a commentary website open, but the weird storytelling levels actually work out quite well and the series stays enjoyable if you're not allergic to scratching your head here and there.

The best parts of the narrative are not the plot twists – Prospero and the fairies might actually be out to wipe out humanity turning everything that came before in the series into a perplexing hoax scheme – but different comics pastiches. Some Bond sequences are presented as James Bond newspaper strips whereas other scenes are meticulous parodies of British girls' comics magazines and children's comics à la Beano. The last issue where we leave Earth takes the form of a 2000AD issue – it's the legendary British science fiction magazine which was instrumental in launching both Moore and O'Neill's careers, so it's a neat meta way to finish their time in comics business. In order to really get the meta levels up, the creators also enter the story in the last issue to attend a wedding ceremony with the art swiped from the Fantastic Four annual in which Stan Lee and Jack Kirby tried to get in to see Invisible Girl marry Mister Fantastic. 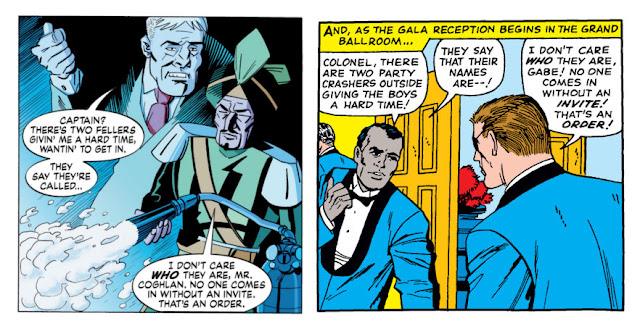 This time we don't get bonus prose features at the back of the comic books. Instead, there's a black-and-white comic-book-inside-a-comic-book thing which mimics a cheap British rip-off of early American superhero comic with characters who are actually real British rip-offs of early American superheroes. It's harder to explain than to read and enjoy, really, and I can't believe nobody had told me about the ice-cream powered superhero Tommy Walls who is actually a thing. Well, now I know!

I'm not sure if they will be included in the graphic novel but the comic books begin and end with editorials and letter columns by "Al and Kev" who shed light on forgotten British comics talents and answer letters (probably 99% of which are ghost-written by themselves). It's fun stuff in its own right and if it is dropped from the graphic novel I suggest you try to hunt the original floppies.

Twenty years from now when the present culture wars have been long forgotten, future readers will scratch their heads with letters like this but maybe it goes with the rest of the confusion:

"Dear Al and Kev: As a middle-aged conservative incel sitting wedged behind my keyboard, trolling Alexandra Ocasio Cortez with my Batman T-shirt covered with Pringles, can I just ask, with a straight face, why you're leaving the comics business? Yours,
Hiram J. Comicsgate III"

Bonuses: +5 for weird, weird, weird pastiches and other irresistibly crazy things from the dustbins of comics history.

Penalties: -5 for the fact that trying to spot references and obsessing about it takes a toll on the reading fun.

Nerd Coefficient: 8/10 -- "well worth your time and attention"