Gamechanger by L. X. Beckett (a pen name for Alyx Dellamonica) manages to avoid the pitfalls of near future SF and rises to tell a story of hope, survival and explores what a near future world might be like. 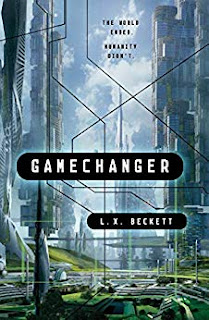 The time is May 2101. After the Setback, when social and environmental problems in the 21st Century very nearly sent humanity into a death spiral extinction-level event, society has reorganized itself. The world is still rebuilding but the Bounceback generation is optimistic,growing and trying to make a better world,  something than more than the mere survival their parents and grandparents had to deal with. Rubi Whiting, gamer, public defender, has been given a doozy of a case--Luciano Pox, an anti social person with some very dark ideas about trying to rebuild Earth. As Rubi takes the case, the mystery of Luciano’s true nature, and those who are seeking him, launch Rubi into virtual games and a lurking plot that could save or doom the world. No pressure, Rubi!

This is the story of L X Beckett’s Gamechanger.

Adversaries with tension socially and sexually is a powerful character trope that in the right hands can be a powerful focus for character drives and action. Beckett puts this as one of the driving forces of the novel with the main character, Rubi Whiting, and her adversary, Gimlet. This really gets into gear in the last portion of the novel, as their tension and their conflicts come at cross purposes. Even as the possible fate of the world’s future hangs, and a VR game pits them against each other, their adversarial chemistry fills the space between them. It’s a potent character relationship and it’s handled very well indeed.

Beyond that, the real highlight of this book is the world that Beckett creates here. How have the Setback. Clawback and now Bounceback generations dealt with a world careening on the edge and fighting back to a new paradigm? This book explores that. Yes, 21st century Capitalism as we know it winds up in the fires of a burning and climate ravaged planet, replaced with new models, new systems and new ways of doing things. Beckett gives us a tour of that world, from the gamification of work, to social capital, to virtual realities and worlds. Depicting a near future world also requires, I think, at least some bridges from our current world. It’s pretty straightforward that someone is going to want to know--okay, how did the world GET this way. Beckett manages this too, rather well, hitting enough of the beats without a history lesson that we can get a good sense of just how her 22nd century world got from where we are. And no, it’s not pretty at all. The bounceback generation might be optimistic and doing their best but they are in the shadow of some dark days indeed.

The plotting of the novel combines elements of a mystery with a thriller. The inciting incident of the oddness of Rubi’s client gives way to a bold claim on his part, and the ever tightening noose of forces that would react, and respond and take advantage of him--whether or not he is telling the truth. This is working gear in gear with Rubi’s own goals for planet reclamation, as well as Gimlet’s plans, and other, more mysterious characters as well. There is always a good sense of where these wheels are turning at any given time and in the last portions of the novel, the author builds up the tension and the various countdown clocks expertly.

The author’s skill on a line by line basis and in layering all of this together is positively masterful. The book has room to explore the plot, character and setting, but for all of that, the book does not suffer from sprawl. Beckett has a heck of a lot of work to do in depicting an early 22nd century world, and provide enough context and background to give readers a good sense of how we got there from here. And in so doing, the author has to keep the character development and actions going, and also keep the worldbuilding from being indigestible lumps that stop the momentum flat.  Gamechanger manages this in spades, giving us this world, its characters within it, and a good sense of how we got there without stopping the flow of the book in the process and instead letting the reader come out on the other hand fully buying into that world.

The book that Gamechanger reminds me of also came out this year, and that would be Beckett’s fellow Canadian author Karl Schroeder in his novel Stealing Worlds. That book also has a short to medium future where the issues of our present and are being addressed with. Virtual reality, the gamification of work, and restructuring society are also on Schroeder’s menu for how we get out of the mess we are in. Schroeder’s work is more focused on artificial intelligences and exploring that as something more established and an accepted thing than the subplots of Gamechanger. Stealing Worlds is also much more of a “down the rabbit hole” sort of novel, where Gamechanger uses a thriller model chassis and sending its heroine into an uncertain situation, but the terrain is firmer beneath her feet. It’s just things going around her and what she deals with, less than an Alice in Wonderland approach that Schroeder uses in his novel. Both books are absolutely worth reading and both are top notch and excellent, with them being allied but of distinct flavors for your reading preferences.

Overall, Gamechanger is an excellent look at a near term future that really could happen. Status quo ante until a hideous death following the same old ways of thinking and living is far from a given and guaranteed thing. Above its character beats, above its inventive and excellent worldbuilding, above its prose and readability, Gamechanger shows its readers a vision of a world that could very well be--if we were willing to fight for it. It’s not a perfect world, but its a worth that the novel’s characters certainly think is worth fighting for, not preserving in stasis, but adapting and building to a better future. Gamechanger is, ultimately, a novel built on the most fragile and precious think in Pandora’s box: Hope.

Bonuses: +1 for strong and inventive worldbuilding
+1 for a  memorable and deep bench of characters centered on Rubi and Gimlet
+1 for the HOPE that the novel begets.

Penalties: -1 for a little bit of roughness in the thriller gear plotting