Linda Nagata’s Inverted Frontier: Silver wraps up a  duology while tying back to yet another of early works, and providing plenty of canvas and room for future books in the universe. 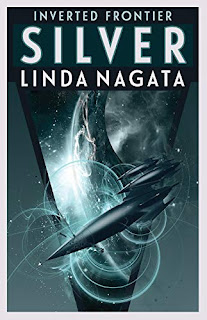 Inverted Frontier: Edges started,a new sequence set in Nagata’s Nanotech Succession universe. From the world of Deception Well, a group of explorers sets out to find out what has happened to Earth and the area around it --the Hallowed Vasties. In their epic journey, they encounter an entity, Lezuri, who nearly derails the mission entirely with his power and ability.

Inverted Frontier: Silver continues the story of Edges. Lezuri has been driven off, but at cost, and parts of the expedition aren’t sure of the fate of the others. All roads, though, lead toward a strange ring shaped world in Lezuri’s past. For to let Lezuri return to his world and regain his power could result in Lezuri defeating the mission in a second encounter. This cannot be allowed to happen.

But on that ring shaped world, the inhabitants, learning to deal with a strange nanotech called Silver, have issues and problems of their own with the return of a fallen God.And so the story of Silver is the clash between those on the ring shaped world, and those coming to it, Along the way we get excellent characterization, development and plotting. And of course gobs of high technological goodness.

When I first read Edges, I did find the name of Lezuri’s strong nanotech, Silver, to be a resonant name, I did wonder at the time as to how this might be connected to Memory, a Linda Nagata novel not previously connected to the Nanotech succession novels, but set on a ring shaped world where a nanotech fog called Silver rose every night. Imagine my delight and surprise when the tenuous connect was made manifest in this novel, both in terms of setting on that world, as well as Jolly, Jubilee, and Moki, characters from Memory.

Nagata has a lot to juggle in this book and nearly hits every mark. She has the main characters from Edges, particularly Urban, coming to the ringworld of Verilotus and interacting with the strange and wonderful world there. She has the characters of Memory dealing with new problems and concerns even before Urban and his ship arrives. Lezuri and his quest to regain power and strength after his defeat...and then there is the rest of the Expedition. There’s a lot going on, and Nagata intercuts between points of view successfully and skillfully.

I think though, as strong as the stories of Jolly, Jubilee, Urban and Lezuri are, the real star of this novel is her return to Verilotus. It is indeed one of the more unique and interesting locations in SFF, and I was delighted to return to it with an outsider and a more nuanced perspective. In Memory, the reader is left with a disjunction between what they realize and what the characters realize about the world. Here, in the context of the Inverted Frontier novels, we have a different perspective to see the world, especially its nanotech Silver, in. It made sure that the return to this novel was fresh and new, and at the same time accessible to readers who have not read the earlier book (You totally SHOULD, though).

In this moment, Veritolus felt like a world that could fit in Monte J Cook’s Numenera universe quite easily. That universe has nanotech all over the place, and a world where a nanotech fog rises up every night--but could potentially be controlled and used (hence the conflict of the novel) is very much in line with the game.The post apocalyptic nanotech feel of the world is memorable and what I bring away from the novel the most, and what I keep thinking about. We learn much about Veritolus and how and why it works, deepening my appreciation of Memory all the more. Should I run a Numenera game and offer the PCs a chance to head to space--a world based on Veritolus would hold wonders and interest.  Heck, other nanotech heavy games like Eclipse Phase also resonate with Nagata’s work.

I did feel that one of the main characters in Edges, Clemantine, didn’t have so much to do in this one and the novel suffered a little bit for it. The dynamic between her and Urban was such a fascinating and interesting dynamic in Edges that, pulling them apart for most of the novel, that dynamic was missing. I think a little more on her to explain some of the actions of hers that she does take, and grounding it and backing it, would have helped shore up this, in my opinion.

That said, Silver is an outstanding followup to Edges and the two novels together as a duoology are an entirely successful and very welcome return for the author to the nanotech far future that made her name as an author. The fact that she was able to tie in Memory into this world and make it holistically seem part of the Nanotech Succession universe all alone is a not inconsiderate feat. Many an author, many a famous author at that, have tried to tie their works together into a cohesive work and the joins and seams and ungainliness of it is evident from the get go. Not so here. Well done!

I do strongly hope there will be more novels set in the Inverted Frontier, as Urban, Clemantine and their companions continue to explore and discover just what has happened to the solar systems near Earth. I am certain she has many more stories to tell, and I for one want to read them. Read Edges, and Silver, and I wager you will, too. It’s one of my favorite books of 2019.

Bonuses: +1 for an excellent wrapping of previous novels and works into a cinematic universe
+1 for an amazing setting returned to from a previous novel.

Penalties: -1 for some of the short shrift given one of the main characters in Edges


Paul Weimer. Ubiquitous in Shadow, but I’m just this guy, you know? @princejvstin.