Welcome to the second installment in a series of four essays focused on Katharine Kerr's Deverry Cycle. This is similar to the work I'm doing on Kurtz's Deryni novels, except this is my first time reading / experiencing Deverry rather than revisiting my old Deryni friends. When I published the first essay in March of 2016 I was hopeful that I would be able to get this second essay up sometime the next year. Instead, it’s been two and a half years. I feel far more optimistic that my Act Three essay on the three books of The Dragon Mage Saga will be done in a much more timely manner, but such things are relative. It should be also noted that because I’m talking about and around the four Westlands books together, I may mention how events from A Time of Exiles play out in Days of Air and Darkness. If you missed reading my first essay, or have forgotten everything I wrote because it has been over two years, here’s a link back. 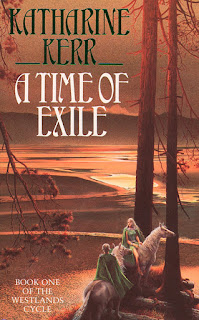 When I wrote about the first four Deverry novels, I mentioned that even knowing there was so much left to explore and eleven novels still to come that The Dragon Revenant felt like it was a true ending, that it completed the story. Knowing that in A Time of Exile it was Rhodry who would enter in that titular exile seemed to me to be a waste of the first four Deverry novels. He would gain his throne and lose Jill to the dweomer only to just as quickly abdicate and go off on the run with her again? Reading a description is a dangerous thing because that is nothing like what actually happened. We forget, even though it was a very important point, that Rhodry is half Elvish, which means that he's going to live a long, long time. So, after ruling for thirty years and fathering four sons...that's a different situation and his departure is to prevent a massacre if it ever got out that he and his family weren't quite human enough.


In some ways, the novels of The Westlands explores Rhodry’s Elvish heritage – but not entirely through Rhodry himself. Instead, what we’re given is a deeper dive into the culture of the Westlands and of the Elves. We get history from hundreds and thousands of years in the past and how the Elves had to leave their homes because of the invasion of “The Horde”, which is something we get into a bit more in the third and fourth novels of this sequence. We learn throughout these novels that the Elves had built wonderous cities and the conquering Horde of their legends were the ancestors of those now known as The Horsekin (I think I have this right). Readers less familiar with the work and timeline of Katharine Kerr will find echoes of the Horsekin with George R. R. Martin’s Dothraki from his A Song of Ice and Fire novels, though it is important to note that Kerr’s most of Kerr’s work was published first (A Game of Thrones was published in 1997, which is after Kerr had already published the first eight of her Deverry novels including all books in the Westlands sequence). As such, if you’re familiar with either the television show or the books, you can do worse for a reference point in mentally comparing the Horsekin to the Dothraki. It’s not exact, but that sort of all-conquering and nomadic horse culture is a fairly apt comparison. I do wonder what Martin may have been reading at the time, as there are similarities and echoes both to the novels of Katharine Kerr but also of Katherine Kurtz (the Deryni novels). This is, of course, beside the point. 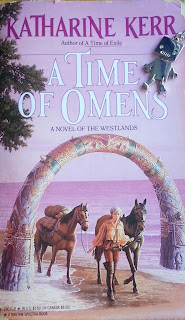 Though this quartet does dive back and forth into Deverry, both in the flashbacks as well as in the “present” era, the emotional core of the novels is very much outside the concerns of Deverry. One of the most important characters introduced is that of Evandar. Evandar is a Guardian, which mostly means that he presents as a demi-god who can pop up at will, make cryptic utterances, and make a mess of the plans of the various viewpoint characters. It is also revealed during this quartet that Evandar and the Guardians are actually the souls of unborn Elves, souls which have refused to be born into the real world. There’s a lot more to that aspect of the series, but since I read the four Westlands novels over a period of two years, I’m a little fuzzier on more of the details revealed in the first two novels (A Time of Exiles, A Time of Omens) than I am of the events of the last two (Days of Blood and Fire, Days of Air and Darkness).

"For three hundred years, he'd been braiding a complex net of schemes to do just that"


Where this all matters is twofold. First, Evandar (a surprisingly uninteresting character for all his growing importance to the story) has been apparently been plotting and scheming and subtly making shifts amongst the living mortals and Elves to further his own aims. In this case, to restore the long lost Elven cities (the ones destroyed by The Horde). This revelation comes a bit late into Days of Air and Darkness, and I don’t recall if there were any hints about that earlier in the series, so it came as a fairly big surprise to me. It was definitely a moment of the realization of the larger game Kerr is playing here with the novels, regardless of whether we will see that come to fruition in the subsequent seven books. 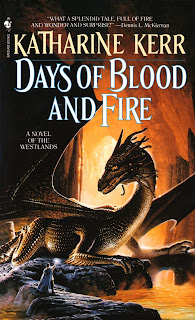 I almost noted there were three ways the Guardian storylines matter, but two of them really combine to this one larger aspect. One of those unborn Guardian souls is to be born and it is part of a major schism between Evandar and Alshandra, another Guardian who was the wife of Evandar and the mother (of sorts) to that unborn soul / Guardian. Like many of the Guardians, Alshandra cannot accept being born and will do anything to get Elessario (that unborn soul in question, it’s getting a little tedious to continue to write “unborn soul”) back. Any by “anything” Katharine Kerr means that she’ll pose as a Goddess to the Horsekin and prompt an invasion into Deverry in order to capture / kill Carramaena, the woman pregnant with the baby Elessario will be born as.

There are hints throughout Days of Air and Darkness that regardless of the outcome of this particular invasion, it is likely only going to put Deverry on notice that the Horsekin exist and they’re probably going to come back and invade again.

One of my favorite aspects of the first four Deverry novels was how tightly constructed the wyrds (fates) of the souls of Rhodry and Jill and Nevyn and Cullyn were tied up. As I noted, that felt like a complete story and it was clear how Kerr was constructing and unraveling the knots of their incarnations over centuries, building them to a place where resolution could occur. That’s not the case here in the four Westlands novels. This four novel sequence is not that sort of a story, which it absolutely does not have to be, but is a little jarring coming into this sequence because everything feels looser. Rhodry and Jill are geographically (and emotionally) separated, so that relationship is no longer at the heart of the narrative. That it takes a little bit to reset the expectations and the feel for the story is what I’m saying.

"When tears sprang to his eyes, he was shocked at himself, that he, a noble-born man no matter how far he'd fallen in the world, would be so proud of saving the lives of farmers, crude peasants all of them"


That’s from Rhodry, the nominal hero of this four book sequence, but it’s also been a common theme running through the series as a whole about how only the “noble born” truly matter. More often than not it is apparent than the speaker isn’t a reliable and authoritative voice on the suject, and given the number of heroes coming through more “common” lines of birth in this series, it is not necessarily a viewpoint that should be taken seriously. But, this is Rhodry, one of our primary viewpoint characters not just of this four book sequence but of the full eight books published thus far. He has frequently been portrayed as being somewhat absurd in his views, especially when contrasted directly with Jill, but this is still something that grates.

Something else raised in that quote is that I’m not sure what to make of Rhodry’s “how far he’d fallen in the world” given that he deliberately gave up his throne (so that he wouldn’t be discovered as a long lived half elf and potentially result in his family being massacred) and chose to return to his life of a “Silver Dagger” mercenary. I fully expect a man as competent and long lived as Rhodry is could find a different life that doesn’t have a falsified “dishonor” tied to it or require Rhodry embrace that dishonor. 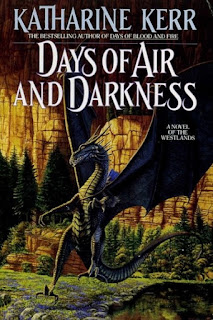 "Of course not! What a silly tale that is! Why, if we could breathe fire, we'd burn our mouths, We'd bake our teeth and turn them brittle. Disgusting thought, really!"


A major turning point in the series is the introduction of dragons. Days of Blood and Fire is Rhodry’s quest to locate a particular dragon and bend it to his will through the use of a magical ring and the knowledge of the dragon’s name. Coming into the series years after it was completed, the dragons aren’t so much of a surprise since the next sequence is The Dragon Mage and the final sequence is The Silver Wyrm. But, it does serve as a momentous shift to a series thus far fairly well grounded to standard human conflict and limited magical threats. Where there is one dragon suggests there will be more. Or, at least, I’ll be surprised and a little disappointed if Arzosah is the only dragon in these novels.

Also, the above quote is one of my favorite descriptions of a dragon not breathing fire that I’ve come across.

As an absolute side note and apropos of nothing, I first tried to read Days of Air and Darkness when I was fourteen. Not only was I not ready for the book then, but I also had no idea it was part of a series and that it was the eighth book in that series or that it was wrapping up a four book cycle inside of a much larger series. I enjoyed, appreciated, and understood it a lot more this time around.

Finally, I would like to note that I have continued to discuss the series in terms of their being fifteen total novels. As noted following the previous essay, Katharine Kerr has announced a new Deverry novel was in progress. The title is A Talent for Magic, and I have no idea what the publication date might be. At the time of the first essay I had seen a “late 2017” date, but that has obviously come and gone. As it stands, the fifteen volume Deverry Cycle is complete. Whenever A Talent for Magic is published we’ll see how that new novel fits into the overall shape of the Cycle or if it continues a storyline set later, much earlier, or some gap that Kerr wanted to fill in.