The Bone Ships by R J Barker is a jump from low power and small scale fantasy into full and blazoning epic fantasy in a world where dragon bones provide the construction material for naval conflict and action. 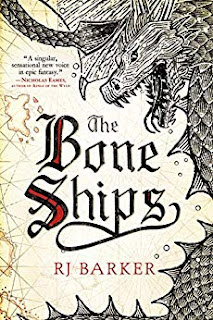 Joron has been sentenced to a Black Ship, a ship crewed by the condemned in the Hundred Isles, an archipelago of islands in a world where ships are built out of dragon bones. His precarious and brief role as shipwife (captain) ends quickly upon the arrival of Bloody Meas, a famous captain who, too, has been sentenced to the Black Ship. Now under her control, the sorry state of The Tide Child and the sorrier state of Joron and the rest of the crew will be put to the test as they search for something that has not been seen in many a year: A dragon.

This is the story of The Bone Ships, first in Barker’s new The Tide Child fantasy series.

First and foremost, this is a rich and well developed words whose complexity and depth filled me with joy to read. Right on a language level, Barker uses words, constructions and names of places and things to convey worldbuilding. Even in the space of an epic fantasy novel, the author carefully deploys his worldbuilding to  make an immersive and deep feeling world. Given the iceberg principle, we do feel the weight of the ice of the world that Barker has built beneath the surface, and he is generous too in what is above the waterline. This is epic fantasy in the mold of a complicated world that the author wants to show you, and also wants you to infer and think about. I came to some interesting conclusions and thoughts about the world about some aspects of it that Barker doesn’t hit the reader over the head with, but instead provides the background for the reader to come to their own realization about.

Take the central conceit of the novel. This is a world with very dangerous and tumultuous oceans, and is a water world, so there is more water than land in the world. Sailing the seas effectively requires the bones of the seagoing dragons, and so it is invaluable as a construction material. Now, take it that none have been seen in a long while leads to all sorts of implications and consequences that the author definitely has thought about and puts his mind into building into the world.

The characters that Barkers bring to life are colorful and complicated. The author uses the main character and his relationship with Bloody Meas as the main thrust to explore the character relationships that she develops. This starts with the crew of the The Tide Child, as Meas establishes her position, and Joron must establish and maintain his new position. Their relationship to each other, as mentor and mentee did remind me of the strength of the bond of the relationship between Girton and Merela in the Age of Assassins. And like that series, developing and growing that relationship is the key to the lock of other relationships in the book as well. There is a range of relationships we see, from Meas and her very important and powerful mother, to the bond that Joron makes with the inhuman guillaime, and much in between. Character conflicts and relationships were a bedrock of the action beats in the Age of Assassins series, and even on a larger canvas, Barker does it here as well.

I want to mention the strength of theme in this novel. As mentioned above, the conflict of this novel is driven by the potential for more dragon bones. In this world, dragon bones are priceless and a limited resource, and a new dragon means new ships. And so the race for the dragon is just more fuel for the fire of the longstanding conflict between the powers. The precarious nature of war and the potential for peace, or for renewed and even more devastating war and conflict, is a theme that pervades the novel and the author really brings to light in his setup and plotting.

The big wide canvas has along with it a big plot, adventure and spirit of action that comes across the page. Taking command of a condemned ship, sailing the seas in search of a dragon, something thought extinct, Barker has Meas, Joron and their crew have all the action beats and adventure one could want--once the novel gets going, that is. There is a tendency in a lot of fantasy fiction to avoid the slow burn and try and hook the reader from the start in sharp action and relief. Hook the reader early, or lose them, is not just a cliche, it is a common practice. Barker has an inciting incident early on, but its not quite the same, and readers who want to be thrown onto the treadmill from the get go are going to be disappointed. Barker takes patient time in building his characters and his world, setting up everything with care before unleashing hell.

And does he ever unleash hell. Sea battles, land marine actions, sieges, and single combats punctuate the novel, In between all of the worldbuilding and character building and establishing of the ship, it’s customs and nature, Barker has his sharp action moments and uses those very well indeed to propel character and move the narrative along. But the early part of the novel has the action beats a little sparser than when the mission of the Tide Child really gets going. Until that point, some patience from action-oriented readers is needed.

That said, however, The Bone Ships for me worked  deliciously. Barker has learned from his previous Age of Assassins trilogy, moving to a larger canvas, a larger story and a more complicated narrative. And he succeeds in this very well indeed. The novel is the start of a series and this novel doesn’t quite give a good off-ramp for readers wanting a one-and done experience.

Bonuses: +1 for strong and intriguing worldbuilding in a new and unique world
+1 for strong use of the themes of resource depletion, war and conflict
+1 for very strong and well done characters

Penalties: -1 The slow start might turn off some impatient readers
-1 for the lack of an offramp for one and done readers

Nerd Coefficient: 8/10  well worth your time and attention