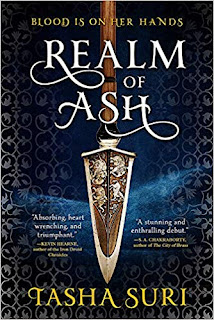 Tasha Suri is back in the world of Ambha, with another story of magic, power, self-actualisation and belonging that expands the world of the first book, Empire of Sand, while offering a continuation of its wider story. Realm of Ash is about Arwa, the younger sister of Empire of Sand's protagonist Mehr - and while you don't have to have read Empire of Sand to enjoy this one, it's going to help to have some background on who Mehr is, her own relationship with the Empire and its authorities, as well as making some of the mysterious plot points... a little less mysterious.

When we meet Arwa, she's been widowed at the age of 21, due to an incident at the fort where her husband was stationed at which led to a spirit possessing all the men within and driving them to kill each other and everyone else inside. Arwa only survived because of her basic knowledge of what her Amrithi blood allows her - as a distant relative of daiva spirits, Amrithi are able to seek protection from them, and Arwa is thus found alive and surrounded by a ring of her own blood, even as everyone else in the fortress dies. As an Ambhan noblewoman, Arwa is not allowed to marry again or to seek any fulfilment of her own, and thus chooses to join a hermitage for widows, where she meets Gulshera, another widow who appears to have strong connections to the Ambhan royal family. Gulshera tries to coach Arwa through her rage at her situation, and eventually discovers the secret of her blood and passes it on to her connection at the palace. This turns out to be Jihan, daughter of the current king and sister to his heir apparent, who is seeking a way to redress the death of the Maha and the subsequent curse which appears to have been unleashed on the land. Arwa is thrown into court politics, and into apprenticeship with Zahir, a bastard son of the Emperor by a mother who was part of an ancient dissenting order. As an unacknowledged and dangerously smart bastard, whose brothers are far less accommodating to his presence than his sister, Zahir is now at the forefront of trying to discover what happened to the Maha and has been learning how to walk in dreams to understand this. Arwa, with her Amrithi heritage, may just have the connections to magic that they need to try and move the research forward - but as the emperor's health fails, the question about the value of doing so, and of saving Ambha, become increasingly complex.

Arwa is a really interesting protagonist, and the book doesn't shy away from establishing her as a person with deep, complex feelings who has been left in a pretty bad place by her life so far. Ambhan society practices purdah - the ritual separation of men and women - and the power of women is portrayed as highly dependent on the men around them, with their choice in marriage being the one officially free decision they are allowed to make. In the wrong hands, Arwa's empowerment narrative could become entirely about rejection of this culture, but Suri takes a far more subtle path than that. While Arwa's need to suppress elements of her personality in marriage is shown as negative, other aspects of her upbringing and culture, like the fact that she veils and spends much of the book in women-only spaces and in the women's sections of the palace are not inherently shown as weaknesses, and the book goes out of its way to show the different levels of influence and power that women can wield even while their male relatives are theoretically the ones in charge. By doing so, the book challenges the assumptions made about Arwa's agency as a restricted elite woman from a misogynist culture, particularly for modern western audiences, and provides space for her to push back on what she needs to. The narrative also offers space for some of Arwa's class privilege to be challenged, as her status allows her to cling to notions of "respectability" and "honour" which aren't available to lower class women who have to find their own way through their culture's structural misogyny.

Likewise, Realm of Ash does a great job balancing Arwa's personal arc - which, as a woman of mixed heritage living among the elite of a racist empire, is very much bound up in wider political factors - with those political elements themselves. Suri provides no easy answers on any level to these questions, particularly not for readers who have read Empire of Sand and are aware of the brutal methods the Maha was using to magically maintain the empire. Rather than rely on primogeniture, the Emperor's successor is appointed by him from amongst his children, with an implication that up until now the choice has always been "obvious" with one sibling just being more inherently suited than all the others. As the current emperor's health fails, however, it becomes clear that the choice between politically safe but angry Akhtar, and the fanatical soldier Parviz, does not leave much in the way of a safe option. Like Arwa, we're forced to consider these choices not in terms of there being an objectively better option, but in terms of what will keep her safest. Its only as the narrative progresses that paths to more radical solutions open up, and even then the tension is still high by the end of the book, with a pretty fascinating setup for the end of the trilogy.

The romance between Arwa and Zahir is signposted from a mile off - and its centrality to the book shouldn't come as a surprise, particularly for readers of the first book - but it's delightfully handled, and I particularly enjoyed how Zahir's desirability is portrayed as being due to his beauty and intelligence rather than any sort of "masculine" ideal (the obvious comparison being, of course, with Arwa's soldier husband). As in every other aspect of the book, there's a deliberateness to the angle which the romantic element takes, and it's definitely not portrayed as Zahir somehow "showing Arwa how to live again" - her growing relationship with him is shown as one of mutual discovery and respect, and in many ways Zahir, as a royal bastard confined to a converted crypt within the women's quarters and acknowledged and saved from death or exile only by Jihan, has even less experience of the world than Arwa does. When Arwa, with her greater magical talents, is able to surpass Zahir's ability to walk in dreams, his concerns revolve around her safety rather than any sort of envy or desire to hold her back. In short, it's about as wholesome a relationship as one can get between an angry, traumatised magic wielder and a mysterious royal bastard in fantasy, and all the more refreshing for it. Their relationship and interactions anchor much of the book, although Arwa has plenty of other people (mostly women) around her as well; while she struggles to understand and maintain alliances in her constrained circumstances, her relationships with Gulshera, Jihan, and other characters are nuanced and never automatically antagonistic without good reason. The portrayal of a court that's restrictive but not outright hostile in the first part of the book is important, as it allows Suri to make full use of the shift when Parviz returns, and the atmosphere shifts to something altogether more oppressive.

Realm of Ash is ultimately a deceptive book, coming across as something slow and soft while sweeping its characters up in a tense and relentless plot. As this is the second in what looks to be shaping up as a trilogy, it leaves more pressing political cliffhangers than Empire of Sand, although Arwa and Zahir themselves do have a satisfying wrap-up to their relationship arc. I'm intrigued to see how the pieces fall into place for the third book, and the angle Suri takes to bring the wider political plot to its conclusion. In the meantime, Realm of Ash is a book that's well worth picking up on its own or with its predecessors, and Suri is certainly an author to watch when it comes to taking care over characters and crafting slow-burning arcs that satisfy both as personal growth narratives and as romances.

Bonuses: +1 Nuanced take on gender, marginalisation and self-actualisationin a South Asian fantasy world; +1 Delightful romance between characters who help each other without

Penalties: -1 Political cliffhangers mean you won't be fully satisfied until the trilogy ends!