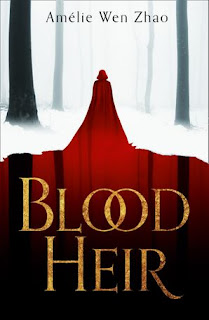 I don't want to talk about Blood Heir without acknowledging the route this book took to publication. Originally scheduled for release the beginning of 2019, the book was delayed after numerous ARC readers identified significant sensitivity issues with an aspect of the plot and characters. Blood Heir deals in some depth with the concept of indenture, with marginalised characters in the place where the book is set at high risk of being forced to sign work contracts which leave them effectively in slavery. In original ARCs, the story's depictions of race provoked strong concerns about how the story came across in the context of historic Black slavery in the USA. In response, author Amélie Wen Zhao delayed the book, revisited in the context of her original intent - to explore concepts of indenture with real-world parallels in Asian countries - and has now released the book, as of late November, satisfied that it did so. Having never read the original ARC, I don't know how much changed before publication, and I should be clear that I'm white and, as a non-American, less likely to pick up cues that would read "chattel slavery" to US audiences - so I'm not going make claims about whether Blood Heir is now "fixed", other than to note I didn't pick up anything other than the author's intended parallels in my own reading. However, from where I stand it feels like Blood Heir's delayed, revised publication is an example of sensitivity reading going right, albeit late in the process and therefore more loudly and messily than might have occurred if concerns had been raised earlier. People were right to raise concerns. Zhao was right to listen and use those concerns to revisit her intended, ownvoices, message. I hope and suspect the book is stronger for it.

Anyway, onto the actual review! Blood Heir is the story of Anastacya Mikaylov, Crown princess of Cyrilla, now on the run after being accused of the murder of her father. Unfortunately for Ana, being found covered in blood at the Emperor's deathbed does make it tricky to argue against a murder charge - but in her defence, Ana is a Blood affinite, born with the rare and extremely creepy ability to manipulate the blood within people's bodies. Ana has kept her talent secret and suppressed for many years - as it caused the very gory public deaths of several innocent bystanders when it manifested, this seems like a good idea, though it's accomplished through some really unfortunate and traumatic methods - and her actions at her father's deathbed were an attempt to heal him of poison. Now, Ana is attempting to hunt down the alchemist who did cause her father's death, the only man with a lead on that is one Ramson Silvertongue, a criminal mastermind who happens to be inconveniently locked up in a high security prison after a job gone wrong.

Blood Heir opens with that prison break, which throws Ana and Ramson into an uneasy alliance - Ana to find the alchemist, and Ramson to track down and get revenge on the crime lord who screwed him over to land him in prison in the first place. Because Ramson is also a point of view character, his motivations don't remain particularly mysterious for long, although Zhao does a good job of having the pair keep secrets from each other and ensuring that the audience is reminded of what each knows about the other and the importance of the secrets they are holding back without it becoming contrived or convoluted. There's also a lot of flashbacks, with Ramson's past in particular requiring some quite long scenes to establish where he came from and what pushed him into the life he's currently leading. Again, these are balanced pretty well, with the information in them deepening our understanding of Ramson's character without excusing his less savoury decisions. Ana and Ramson are pretty immediately established to have a slow burn thing going on, and its well handled - again, having Ramson's point of view helps a lot with that, as it helps to humanise him and make him more sympathetic to the reader while also maintaining some of that mysterious bad-boy attraction to him for Ana.

Much of Blood Heir is concerned with Ana's self-discovery, as both a potential leader and as an Affinite. When it comes to the latter, Blood Heir doesn't give Ana a pass on her privilege, pushing her to grapple with the fact that her past may have led to its own trauma, but her status also put her out of reach of the slavery and corruption which is a reality for the vast majority of Affinites (nitpicky readers will wonder why she only starts having these revelations nearly a year after escaping the palace and going on the run, but that's not really the point). The trigger to these discoveries are the numerous Affinites we meet on her journey, from May, the character she has bonded most closely with during her exile, who is an Earth Affinite, to the Yaegers - who are, I guess, "Affinite Affinites" and can dampen the talents of others, to those with other talents and agendas who we meet later on and who seem poised to play a much greater role in the sequels. Despite the particularities of her talent, and the fact that it is twice established she is only really able to use it for creepy restraints and murder, Ana's emotional journey takes a more straightforward "self acceptance" tack than I'd have expected, though I don't think her particular state of mind at the end of the book is likely to carry through a full trilogy (assuming that's what this is) without significantly more growth. What is harder to ignore is the lack of much growth or independent agency for most of these other Affinites, although there are a few cool characters who I hope will have an opportunity to develop further in later books. This is, of course, very far from the only book with "privileged but "special" character discovers discrimination exists for "special" people without privilege", and it certainly doesn't place Ana in any sort of saviour or leadership role for the people who share her marginalisations - they've already got their own mechanisms for organising, and indeed the scene which caused the initial blow-up is actually very much about Ana coming into contact with their external agenda. If you're tired of this trope, Blood Heir is not going to make it new and refreshing for you, but it's not done badly by any means.

Blood Heir is definitely positioned as the start of a series and there's not much resolution to be had in its closing pages - without giving too much away, Ana and Ramson end up going "... ok, well, let's try a new tactic for that," in the last couple of pages and riding off into the sunset while giving each other meaningful glances then glancing away because slow burn. I know I shouldn't label things "trends" based on two separate anecdotal experiences, but given that I only just read Joan He's Descendent of the Crane, which closes its courtly intrigue in a not-dissimilar state, I wasn't in the best mood for books-without-endings this time around (in fact, I kept up with the naive "how are they going to resolve this in 20 pages... now 15... 10..." until the bitter end). Luckily, Blood Heir is strong enough on its own merits that I'm intrigued to see where the next one goes, and despite some of its more formulaic aspects it's still a worthwhile addition to the YA fantasy shelf.

Bonuses: +1 Original magic system with a genuinely unsettling talent for the protagonist; +1 Balances the secrets the characters are keeping from each other without artificially leaving the audience in the dark

Penalties: -1 Yet another entry in the canon of compromised YA princesses self-actualising around their privilege; -1 Ends with very little actually resolved