Review: The Sleepless by Victor Manibo 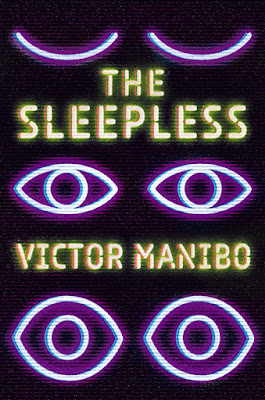 In the 2040s, a worldwide plague of insomnia has made around two billion people permanently Sleepless. After a confusing period of panic and uncertainty, the economy has adjusted: those who are Sleepless rent smaller apartments with no bedroom, work three or four shifts without resting, or use the extra hours to learn new hobbies. No one is sure how the plague started (some speculate that artificial coffee may be the culprit), but the rate of contagion seems to have plateaued, and for the moment, things seem manageable. Some people sleep, and some don't. Some businesses are open for extra hours, and some cities spend more on lighting.

And that would be the end of it, were it not for the extremist clandestine militias that claim Sleeplessness is a superior stage of human evolution, and the other extremist clandestine militias that want to limit the civil rights of the Sleepless, and the shady corporations that want to create a tireless workforce, and the secret assassins that have been kidnapping top neurology researchers, and the biohacker labs trying to induce artificial Sleeplessness, and the other biohacker labs trying to cure Sleeplessness, and the tech bro billionaires trying to benefit from the controversy either way, and the news broadcasters struggling to maintain some independence in the middle of so many unpredictable changing winds.

This plot is dense, folks. Try not to doze off.

Our protagonist, investigative journalist Jamie Vega, has become Sleepless on purpose, to avoid the nightmares he's been having since a close friend died. But when he finds his boss dead at the office, just before they were supposed to publish an exposé on a corrupt politician, all his suppressed emotions resurface, and he's quickly embroiled in a web of conspiracies and betrayals and double agendas that converge on him as the prime target of multiple factions in a secret war with global stakes.

The novel opens as your standard detective mystery, with consecutive scenes of interrogating and revisiting previous locations to gather clues, but as our protagonist gets closer to the truth, the action escalates drastically. The final third of the book breezes by like a breakneck spy thriller that unfortunately hits the brakes too abruptly for an extended discussion scene where all the secrets are painstakingly explained to the reader. There is more action after this, but the momentum has been ruined, and then the denouement is a bit too long. But this clunky pacing is a necessary evil: there's just too much information that the reader needs to receive in order to fully comprehend the mammoth conspiracy that the author has concocted, so the bulk of the book is spent in page after page of backstory or dialogue.

The page count devoted to explaining the intricate machinations of our antagonists detracts from what would have been really interesting in this novel, which is to address the human-level implications of its premise. We get only scattered descriptions of what normal life looks like when people no longer need to sleep. There's some mention of the ethical risks of 24/7 work and the environmental threat of 24/7 consumption, but the narrative is focused mostly on our protagonist's chase against time to solve the mystery of who killed his boss, and we don't get enough opportunities to experience his world with him.

This is a regrettable combination of setting and theme: we take it for granted that sleep is an essential part of human nature, and the consequences of such a radical alteration of our biology could have been explored in much more compelling ways than in a corporate/political crime thriller. When the villain's full plan is revealed, it feels like the plot has lost sight of its theme and has turned into a typical Big Bad Company story. The central mystery turns out to hinge on the outcome of a corporate board vote, which is a massively unsatisfying reward for all the adrenaline we've spent in getting there.

To its credit, The Sleepless introduces a unique concept that on its own merits makes the reading worthwhile. But the way its premise is developed takes after too many familiar detective tropes, as if the writer is having more fun with the police procedural structure than with the psychological repercussions that a story like this demands. This is undeniably a fun adventure, but it shouldn't have needed to be one. The vertiginous experience of Sleeplessness itself would have made for a powerful hook; the hidden mics and poison bottles feel rather like an unwelcome distraction.

Bonuses: +1 for achieving the difficult writing feat of describing the sensation of anomalous forgetfulness from a first-person perspective.

Penalties: −2 for endless scenes of exposition.