Laura Anne Gilman’s Uncanny Times leverages her skills at Urban Fantasy to tell a Historical fantasy tale of a supernaturally oriented pair of siblings who bump back the things that bump in the night. 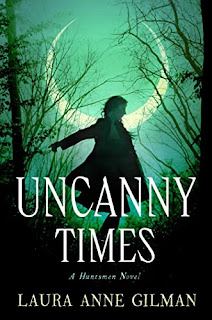 Rosemary and Aaron have a problem. Being Huntsmen, with a touch of the supernatural, the weird, to them, trouble is something they are drawn to, and vice versa. Their role as Huntsmen is to police and deal with the supernatural elements when they rise and threaten people. When a relative dies, and calls for them to come to their town, Rosemary and Aaron find that there is definitely a supernatural creature in the town, but something beyond the brownies in the bakery, or even the Merwoman. Something...they aren’t familiar with. Something extremely deadly.

This is the story of Uncanny Times, a historical urban fantasy from Laura Anne Gilman.

For Me, reading Laura Anne Gilman has always been a dive into communities. Overlapping penumbras of communities, relationship webs and characters interacting and working together is a hallmark of her fiction. Be it the epic fantasy of the Vineart War, the intense relationships in the Casa Nostradamus series, the bonds seen in the Devil’s West saga, and more, it is those relationships that one can read for in a Laura Anne Gilman story, or novel. Gilman makes us care about the characters, who they are, what they are, to themselves, to each other and the world around them.

Here we have, first and foremost, the brother and sister relationship. They are an effective team, have been for quite a while, and Gilman does an excellent job in showing us their past competence, allusions to prior encounters and sets us up for the adventure at hand, their trip upstate New York, and working to uncover the mystery.of what Uncanny (supernatural creature) is causing trouble in the town, and what is to be done about it. Gilman makes this story seem like an episode in a long running series, this episodic nature grounding the reader in the illusion that there are many more stories about them, past and forward, without making a reader have to read more to understand their story.  We are given enough to understand them, their role, their tools, and why they do what they do.

I thought it was a nice touch to make the last name of the brother and sister Harker, a nice little touch of the hat to Dracula. They each have their strengths and abilities and complement each other nicely, both on a professional and a personal level.

The brother and sister relationship extends to their dog, Botheration, or, Bother. Bother is a descendant of Molossian hounds, bred and sculpted to deal with the Uncanny and is a character in and of himself. His loyalty and doggedness remind me of another recent SFF dog that I (re)read and that would be Bortan from Roger Zelazny’s THIS IMMORTAL. Both dogs are tirelessly loyalty, intelligent, and characters in their own right. Both are called Hellhounds in the text. Was Bother inspired by Bortan? I don’t know, but I was charmingly reminded of Bortan in reading about Botheration.

Beyond the brother, sister and dog relationship, we also get the social relationships of the town, and the uncanny in the area as well, providing a rich depth of character background for even the most minor of characters up to the eventually revealed antagonist. The book is, in the end, a mystery, a unfolding of secrets and history of the town that describing the plot too much would spoil.  The relationship between various Uncanny in the town put me in mind of Juliet McKenna's Green Man novels and how the supernatural creatures in that verse relate to each other.

Brunson itself is an imaginary town, but I couldn’t have told that it wasn’t just lifted from real life until I looked it up. And it is in the creation of Brunson and its grounding in history, culture and the historical moment that the novel takes place in (1913). What Gilman gets to work with, in the time period for her novel, is social change in the twin streams of the labor movement, and women’s rights (voting) movement. As always, SFF is often about the time and place in which it is written, rather than where and when it is set. This is a time, a moment, as of the publication of this novel, where both labor rights and women’s rights (bodily autonomy) are being litigated and coming under threat. Gilman’s use of this time period puts a lens on us, as well as this moment before World War One, and she does it to good effect. The tools that capital and the rich use against these are different in 1913 than 2022, but the feel of that oppression is real. As far as how this ties into the main plot of the uncanny murdering people in the town, I leave for the reader to discover. Gilman’s mastery of plotting had me guessing throughout, trying to anticipate the answers eventually revealed. This is a case of where competent and experienced protagonists are running up against the unknown and Gilman does a great job at the balance.

There is also a community in the background, sketched in and indistinct but real enough from the hints, and that is the Huntsmen community itself. It’s made clear through the text that the Huntsmen is a calling, something you are born to, and a society for lack of a better world that has been going on for decades, perhaps centuries. How and where the Huntsmen came from was a question burning in my mind, That’s not the focus of this novel, of course, but given my relentless curiosity, I want to Know More.  And there is a hint here in the book that some longstanding ideas and principles are under threat.

As mentioned above, this is clearly a “one shot” episode of the Harker’s adventures and the novel concludes satisfactorily with a complete and whole story. The bottom of the novel says “A Huntsmen Novel” which provides the hope that there are going to be more Huntsmen stories, either with the Harkers, or with other Huntsmen, elsewhere and elsewhen. I would be most interested in reading more stories of these individuals who stand between the normal and the uncanny and the adventures and situations they get entangled with.

Bonuses: +1 for a strong and interesting worldbuilding

+1 for excellent characterization and relationship maps.

Penalties: -1 A couple of shifts of point of view are not quite as effective as they might be.

POSTED BY: Paul Weimer. Ubiquitous in Shadow, but I’m just this guy, you know? @princejvstin.
Posted by Paul Weimer at 10:30:00 PM