Microreview[Novel]: A Taste of Gold and Iron by Alexandra Rowland 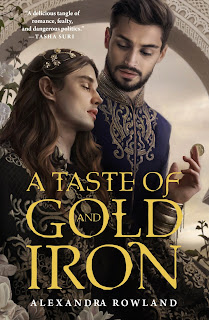 Apparently when A Taste of Gold and Iron was announced, it came with a list of AO3 style content tags, thus:

This in many ways tells you exactly what sort of book this is. There’s an enormous ticklist of tropes that crop up throughout the story – the above list only covers the non-spoiler ones – and they are introduced with such palpable glee that you feel like Alexandra Rowland was giggling along as they were writing it, just as I was giggling along reading it. It is tremendously silly, abundantly playful and totally self-aware of what it’s doing as a story. There’s even a character who laughs out loud at the romance he’s seeing before him and the events that unfold, in case the rest of it had been too subtle on that point. And because there’s this sense of laughing with the author, it’s an absolute joy of a reading experience. Add to this that it’s a queernorm world with at the very least gay, pan, ace and third gender representation, and it’s just the perfect escapist delight.

Both the romantic leads are compelling characters, and manage to make a good middle ground between opposites attracting and finding unexpected commonalities, so you feel like they genuinely would find ways to get along and care for each other (which I often find lacking in total opposites attracting situations). Their dynamic manages to balance fun and tension throughout the story, without indulging so hard on either side as to strain enjoyment. Yes it’s silly, yes there’s only one bed… but the reason there’s only one bed, and the stresses and worries that come from it, are plausible enough as a framing device that it works.

Particularly of note is Kadou, the prince – though not labelled as such, he’s very clearly portrayed as suffering from quite severe anxiety, and the way that’s managed, how he and other characters respond and relate to it, is done extremely well. It’s framed in terms that make sense for the culture he is in, and dealt with likewise, but without resorting to “no one believes in mental health issues in the past”. Solutions are sought from the medicinal (teas) to the theological, but it is generally just accepted as being part of the person he is, and he and those who love him just need to figure out how best to manage it when it starts to impact his happiness or ability to do what he needs to do.

Aside from the leads, there are a whole cast of entirely lovable secondary characters, from the slightly frazzled older sister sultan to the tough love and exasperation captain of the guard to the absolute chaos goblin friend/armsman and more besides.

Outside of the characters and romance, the world is wonderful – a fantasy peusdo-Ottoman-ish kingdom of merchants, with relations with pseudo-France and others. There are some wonderful details of points of fashion, of culture and of styles of dress, and part of what’s great about this not being yet another fantasy-medieval-western-Europe setting is we get approaches to gender as it intersects with culture and behaviour that aren’t what you’d get in something that was clearly fake-historical-London. There are glimpses of how the characters conceive of masculinity which I really enjoyed exploring – what fabrics, behaviours and clothing was appropriate to a man in a particular station, for instance – and it was very gently introduced throughout, though I’d have liked more of it. Likewise, we don’t see enough of it to be sure, but at least in the setting country (Arasht), power seems to be gender-non-specific, and we get hints of some interesting rules around inheritance, parenthood and the ties of family, all of which feed into the main plot, but without being overburdened by exposition. If anything, I could have done with a bit more exposition, because I was so interested in what was going on.

But the plot is very much inward focussing, and so we are mostly denied that (at least in this book – I have hopes for any future sequels). The core issue of the story, besides the romance, is that in our fantasy mercantile kingdom, full of people who can tell at a touch the purity of metal, and whose relationships with other countries, and whose standing and reputation with them relies on the absolute quality and integrity of their coinage… someone has been debasing the currency! I never knew the dearth of fantasy books with this as a core theme was something that needed to be rectified until I read this one, but apparently it is. And in many ways, it’s a story point that’s absolutely perfect for a fantasy retelling – it’s something that was, at times in history, a really critical and kingdom shattering issue, and one that’s graspable on the scale of individual actions. This is especially true for a book with a protagonist who has the magical sense for metals – he’s perfectly placed in power and ability to be the one investigating exactly who’s messing with their money.

We don’t get to see much of the world outside Arasht, despite the extent to which those outside opinions are a massive driver for solving the coinage crisis, and I think this does weaken the strength of that part of the plot – so many people emphasise quite how catastrophic and image management situation this is, it would have been nice to be able to see how correct they were on that score.

We also, frankly, don’t get enough of it as a plot point in general for my liking. The story is definitely far more interested in the romance and the tension inherent in that to dwell too hard on the geopolitical tensions that are set up, and there are times – when the drama of the story is in full swing but we focus more on the headspace of the characters in love than how they are thinking about the crises that surround them – when this feels a little like the plot has been done dirty by the romance. There’s so much in it that’s exciting and good, so much I want to explore, and it gets skimmed over that few too many times for my liking, especially in a book as pacy as this one – we could absolutely stand to have a bit more time spent exploring exactly what was going on with all the different parts of the conspiracy at play, without even needing to cut down on the romantic sides, and it would still have managed to be a light, fun and fast-reading book.

There’s also one character who gets, at least for me, a little sidelined towards the end, and again, the issue with that is how good what we get up to that point has been – I’m left wanting more, especially as there are some great hints about his internal struggles and development that I really wish we could have managed to get more of a handle on.

But, all in all, those are far more problems I find when looking back than ones I experienced while reading. In the moment, the book was an absolute romp that I found impossible to put down. It is far more a romance with a fantasy story in than a fantasy story with romance in, but it’s easy to forgive when the romance is quite so fun and so funny as this one.