Sing, Muse of the Retelling of the story of Troy, as told by the bard Stephen Fry. 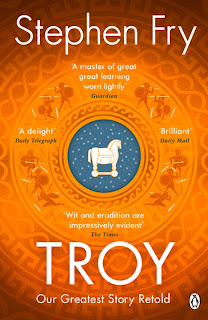 The first two volumes of the Mythos project by Stephen Fry looked at the foundational myths of Greek Myths, from creation all the way through the Olympians, through the elder cycle of heroes and demigods, and then to the succeeding generations of demigods and heroes. It’s a complicated nest of relationships, characters, and events that still puts things like the Marvel Cinematic Universe to shame, and Fry ably brings it all together, if anyone can, in the previous two books.

Now in Troy, Stephen Fry caps it off by looking at the Trojan War.

The Trojan War, standalone, is eternally popular, with even an early Doctor Who episode taking a crack at it, as does Shakespeare. It was odd to me when I first read the Iliad, though that we have a war that lasts 10 years, the Iliad only covers a short period in the ninth year of the war. Where was the Trojan Horse that I had heard about before ever reading the Iliad, so infused as it is in our cultural DNA? Why doesn’t Troy fall at the end of the Iliad? I later (when I read The Odyssey) saw that the ending of the War is contained there. And while I knew the Golden Apple story and the abduction (or flight) of Helen with Paris, what happened in years 1-8 of the Trojan War was and has been vague and not well defined.  Perhaps this is the same for you, reader.

And all of these names and people to keep straight. I’ve heard the Iliad and the Odyssey described as the OG Sword and Sorcery and Epic Fantasy books, and there is a point to that. We’re dropped into the middle of things, with names and characters being thrown at you and an entire book in the Iliad (The Catalogue of Ships)  being basically a list of the “who’s who” at the battle.

In any event, Fry is here to help you. He starts at the beginning, as to how Troy was founded, and why, and brings its history up to date as it were. The delight in the depth of research and scholarship he brings is tha there is a fair chunk here I didn’t know about. Fun fact, the Trojan War is not the first time that Troy gets attacked in its mythological history, and you will never guess who did it before the Greeks got it into their heads to take back Helen, nor why.

Once we get to the story of Paris, I was on fully fleshed ground and I highly enjoyed Fry’s interpretation of his abandonment on Mount Ida, his being raised as a shepherd, the fateful judgment of Paris (giving the apple to Aphrodite) and on through into the War itself. Fry does not do the Catalogue in full but he does lay out the combatants, the names you do want to pay attention to and remember. When and where they are important to the narrative, and who they are to each other. Like the American Civil War, there are tangled distant family and friendships and acquaintances on both sides of the battle. And frequently (especially among the Greeks, and indeed, the inciting incident of the Iliad), the people on each side are at odds with each other. Long before there was Tony and Steve in the MCU, there was Agamemnon, Odysseus, Achilles, Menelaus, Ajax, and others.

There are many versions of the Iliad, and people have their favorites. Fry is not trying to be Robert Fitzgerald, or Lattimore, or Fagles, or Caroline Alexander. He doesn’t recite the Iliad, but tells its story in prose, in his own way. All the details are here, though, the pathos and the wonder, the terrible slaughter. He looks at the book with the eye of someone who loves and respects the story but can also see it’s faults. There is a fascinating bit where Fry metatextualizes a portion of the Iliad that, unbeknownst to me, he reveals that scholars think is a late addition, as it stylistically and otherwise does not match up with the rest of the poem.

Another portion of the book that greatly interested me especially is after the death of Hector, and up to its fall. What had always been a little hazy for me is why Troy didn’t capitulate after their best hero, Hector, falls. In chess terms, they’ve just lost their queen, and are down material, and white is pushing hard against them.  Fry tells the story of the reinforcements Troy gets, which does not change the outcome, but it does stave it off, and it buys Troy time for Paris to land his fateful shot on Achilles’ heel (or was it with the help of Apollo?). Also some of the other events leading up to the Horse were new to me (Helen’s complete disenchantment with Paris, and Paris’ death, and the Greeks nearly getting Troy to crack before the Horse itself). The fact that Helen remarries was completely a “what?” moment for me.

Another thing that struck me about this book as compared to the previous two is the lack of variations and the need to tell about alternatives to the main line of the myths and stories. Early on in the book, when the book discusses the founding of Troy, there are a few bits here and there, but in the main, the narrative of the who, and the what, and the why of the events of the Trojan War are much less braided and multivalent than in Mythos and Heroes. This is not particularly a fault, mind, but after two books where we get a host of alternatives to the stories of Zeus, Athena, Atalanta, Jason and Heracles, there is a much more unified picture as to what happened on the plains of Ida, what happened to the topless towers of Ilium. This is of course because our sources for the Trojan War and the stories of what happened at Troy once Paris and Helen arrive there come from Homer and sources that agree with Homer.

I do think that while there are certainly a few more “stories” to tell of the Greek Myths, the Trojan War, the events at Troy are the last hurrah, the last great gathering of Gods and Heroes on both sides. To use a Norse reference, in a way, Troy is a Götterdämmerung, and we are left with a world where the heroes and the Gods themselves fade away, leaving a world of mortal men, and just the stories of what happened in these three books.

In a real sense, then, when Eris threw her golden apple into that fateful marriage party, she had, in effect, doomed herself and all the Gods, with the Trojan War to be their final hurrah, their last battlefield. This gives the whole book a sense of tragedy, of foreboding that this is going to be the end, and it better had be a blockbuster smash. One last party, one last gathering.  Fry prefigures this idea with the marriage party of Peleus and Thetis, he states it is the “last great gathering” of these beings, and he is right. There is an almost faerie-like feel of diminishment in that, that the world is going to turn from the age of gold and silver and bronze to hard, cold, iron. (rather appropriate, in that the Trojan War might be thought of as the last hurrah of the Bronze Age)

And in that, Stephen Fry has completed very ably the project he began with Mythos. I do think that although the books are footnoted, always a hazard for listening to books, the sheer enthusiasm, love, respect, and intense fascination Fry has for these stories really comes through on the audio renditions. Like Homer himself, these stories here, of Paris’ choice, of the Rage of Achilles, of the Tragedy of Hector, the cleverness of Odysseus, are in the end well received in one’s ears, just as well as reading them in print.

With people like Fry reading and reinterpreting and retransmitting the stories of the Greek Myths, I do hope, and I think, that these stories will find new readers, new transmitters, and new interpreters. While Fry does a fairly good job in providing a balanced and enlightened and nuanced viewpoint to these stories, another thing that struck me as I was listening to Troy (and indeed all of Mythos) is how much room there still is and is for readers and writers who are not of different backgrounds to take these stories and reinterpret, reinvent, and reuse them.

Troy is the capstone of a whole cycle of Greek myths and stories that writers like Maya Deane (Wrath Goddess Sing), Madeline Miller (Song of Achilles), Natalie Haynes (A Thousand Ships) and others are picking up the banner and running with their own ideas and interpretations for. Fry provides a modern “baseline” for writers such as these to rediscover these stories, and then go on and tell and make them their own, providing ever new interpretations and (keeping in mind what I said before) new variations, too. That is my hope: With this work to introduce readers to these stories and myths in an accessible way, more people will want to take them and make them their own. I still dream of a Greek Mythology Cinematic Universe, but that is probably just a dream.

And with that, this review, as well as the Trojan War comes to a close. I'd humbly suggest that Fry tackle the (sadly) much poorer and thinner canon we have of Norse Mythology yet, but we HAVE that book already, ably written (and narrated) by Neil Gaiman. Readers who want more mythology ably written and imagined as in these three books might turn to that volume, next.