Review: How to Date a Superhero (and Not Die Trying) 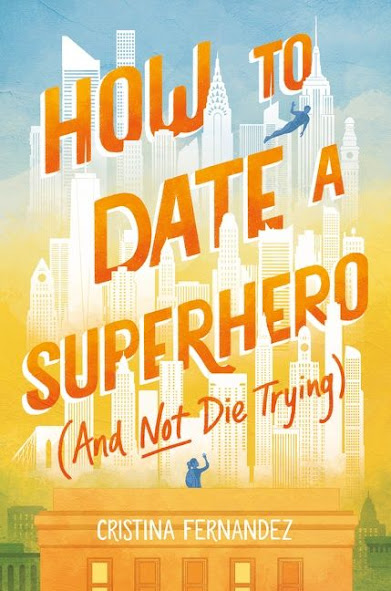 Astrid Rose has everything under control. In her meticulously plotted trajectory towards a medical degree with top grades, she has planned her daily tasks to the exact minute and second. She has allotted time to study, time to sleep, time to shower, time to do homework, time to run between classes, time to cram for tests, time to use the college lab, time to go to the library, time to eat a hurried brunch while she reviews flash cards, time to socialize with her one friend, time to collapse in tears for her weekly nervous breakdown. Not a moment is wasted. She has regimented her life into a nonstop cycle of millimetric efficiency.

But Astrid can't control how she feels around Max Martin. She has known him since high school, and now that they're finally dating, she has added time for him in her perfect schedule, but his gentle, soothing presence melts everything inside her. When she's with him, her entire methodology for time micromanagement goes out the window. He's funny, smart, responsible, and a total gentleman to her. It doesn't hurt that he also has the perfect smile, perfect hair, perfect eyes, perfect biceps. So Astrid is more than happy to allow this fountain of chaotic sensations into the otherwise monastic strictness of her routine. As things stand, Astrid's life is looking bright.

Until one night, when an incident with a superpowered villain forces Max to reveal his secret to her: he is a superhero. He has the strength, and the speed, and the enhanced senses, plus he can fly. And this is actually not too uncommon, because they live in a world where superheroes and their catastrophically destructive fights are an accepted part of life. Alien invasions and mad scientists and extradimensional monstrosities appear on a daily basis, and while mutants and demigods fight to save the world, normal people keep doing their normal stuff.

Except Astrid's life is not normal anymore. As a superhero's girlfriend, she has new duties to take care of. In addition to her double major at premed school, now she has to attend a secret school for significant others of superheroes, where she learns the practical lessons of any Lois Lane and MJ Watson worth her salt: how to run from danger, how to handle being kidnapped, how to untie your knots, how to make up excuses for unexplained absences, how to hide during an epic battle, how to hang from a ledge while you wait to be rescued. No matter how tight her schedule is, she absolutely needs those classes. The irresistibly gorgeous Max may be the dream boyfriend, but being near him means standing directly in the line of fire. Will Astrid stay alive long enough to get a passing grade? How many world-ending crises can their relationship survive? And what's with the mysterious lab saboteur who appears to be turning into her own archenemy?

How to Date a Superhero (and Not Die Trying), the debut novel by Cristina Fernandez, is a clever parody of every super-girlfriend story ever, as well as a hot romance story bursting at the seams with barely contained desire. Astrid is head over heels for Max, even as windowpanes explode and vehicles crash and buildings crumble right next to her. It's a delightful experience to watch the plot shift back and forth between serious, intense emotions and absurdist comedy without skipping a beat. The key to this stellar feat of narrative skill is the character of Astrid, the most relatable weirdo you've never met. Her obsession with living a life exactly according to plan is a heightened version of the anxieties we've all had in our youth, when we suddenly faced responsibilities for the first time and feared that one small mistake could derail our future. Inevitably, her overcomplicated coping strategies clash against each other and reveal glimpses of the lingering insecurities she's been nurturing since a close brush with death led her to take "seize the day" a bit too literally.

The result is a fascinatingly layered personality that carries the plot through the fun and the drama, through ridiculous dorm room antics and crucial life-or-death decisions. What allows this novel to weave so many different emotional tones without unraveling from incongruity is the robustness with which Astrid is written. The exquisite fragility from which she experiences the world is kept concealed under a regime of panicked self-castigation. I know this sounds like it should produce a numbing effect, but somehow it's the complete opposite. The more you see Astrid aggressively discipline herself, the more you want to know her and hug her and tell her that you hope she finds happiness. And the unique workings of her mind provide an inexhaustible torrent of outlandish yet irrefutable reasonings and unexpectedly gut-punching insights. If her uncontrollable bodily reactions clearly show what she finds attractive in Max, her immensely interesting thought process explains why Max loves her.

Building on the rock-solid basis of this protagonist, Fernandez poses profound questions that the superhero setting amplifies to unavoidable proportions. How much sacrifice is acceptable and fair as a show of love? Why would you need to be a world-class champion before you have the right to feel good about yourself? If you view happiness as a project, when can you say it's finished? (And doesn't it sound kind of alarming to finish it?) Should the prospect of death make us more or less motivated? (But why should death be a source of motivation in the first place?) Is it worth the effort to love someone that you know could die at any time? (Well, isn't that the case for everyone who has loved someone?)

By the time Astrid reaches her senior year at college, her growth as a person is by no means complete, because no one ever gets there, because we can't know in advance which lessons life will force us to learn. But she's become a more open person, still impressively organized, but more accepting of herself, more adaptable to failures. As she rides the rollercoaster of falling in love and falling into depression and falling from buildings and falling behind in her career, she discovers a healthier reason to go on than the raw urgency of time. And that is, in its own way, a form of superstrength we can all achieve without having to survive a freak accident.

Reference: Fernandez, Cristina. How to Date a Superhero (and Not Die Trying) [Katherine Tegen Books, 2022].
Posted by Arturo Serrano at 12:00:00 AM