A take on the idea of magic users in a secret bureaucracy, but with an extra tasty layer of interrogation of power structures. 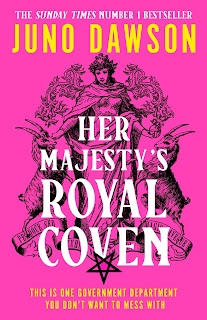 “What if there are magical people, and they’re also in power in some way?” is not an uncommon question for urban fantasy to attempt to answer – Ben Aaronovitch’s Rivers of London series does it with the Met(ropolitan Police), Charlie Stross’ Laundry Files with the intelligence/civil service, to name just a couple of British examples. Magic people secretly in the government is an easy and appealing mirror to throw up against existing structures and ask “what if?”. However, many of them tend to take those power structures at face value, as neutral, if not good actors in the world they exist in, and as a vector for interesting storylines, rather than a theme in and of themselves.

In Her Majesty’s Royal Coven, however, Juno Dawson feels the need to take it a step further.

You have all the good elements of a traditional urban fantasy – there are witches in/alongside the British government, they’ve been there for hundreds of years, and they live secretly among the rest of us, doing their witchy business but with rules and laws like, and unlike, their mundane counterparts. We have viewpoint characters within and without HMRC (yep) itself, and so we see multiple sides of an unfolding drama that could threaten the very foundations of the witching woooorrrllld! <end movie trailer voice>. And that’s all great – stories in that mould are often fun, compelling, pacy reads with a wonderful balance of the familiar and strange. You get to see a place you may know (or at least know of) but with a magical twist, and imagine what it would be like if there was that little extra spice in the world.

But HMRC strives to be more than simply a romp through magical Greater Manchester. In its twin narratives of the present day and memories of a secret magical war that most of our adult actors fought in, it shows us a reflection of real world concerns of supremacy and authoritarianism, and the legacy that lives on even after such a conflict seems to have been won. But in its multiple voices, in its queer and black characters who are reckoning with that legacy not just as the other characters are, but filtered through their own trauma of existing in a white-centred, straight-centred, cis-centred world, it throws away the mirror and brings the real world in wholesale. Analogy isn’t enough, it says. It isn’t just about the bad guys, the magical fascists, who we can let our minds glide over as a historical problem solved, or a fantasy one. Instead, it’s about the here and now, and the problems caused by people who were once on the right side of history but refuse to listen when the time comes for them to accept change.

It is a book enormously about straight, cis, white women and the privilege they hold, when we take away their own gendered oppression, at least somewhat. It is, in fact, one of the rare books that does an inversion of gendered power without kicking itself ignobly in the face – Dawson’s witches are matriarchal, yes, there’s gendered inequality in a world where warlocks (male witches) are seen as inherently weaker and less important, in a world where the women speak in universals that forget or exclude the men. But it’s not the whole focus of the book, merely a part of the picture, and, critically, it is a world that remembers that trans and non-binary people exist, and explores where they fit into those power structures (or are prevented from fitting). Many books whose sole purpose is asking “what if women were more powerful than men?” manage to fail spectacularly, either ignoring trans and nb folks altogether, or bringing them half-heartedly into a story in such a way as to reveal unpleasant biases held. Dawson, unsurprisingly, does neither of these, and highlights queer experiences in this inversion, while presenting us with the good, the bad and all the complicated that inversion might bring.

That being said, there are some issues. The narrative is a little slow to find itself – once I got about a third of the way through and figured out what sort of book it was trying to be, I loved it, and couldn’t put it down, but up until that point there was a bit of a waiting for the other shoe to drop. Not a mystery, but just uncertainty about exactly what sort of story we’re getting ourselves into. However, the remaining two thirds more than make up for it, and once things get going and we realise quite what the antagonistic force is going to be, it entirely lives up to the romp one might expect it to be from the blurb, with a few small hitches and bumps here and there towards the end. This, unfortunately, makes it a very difficult book to review - a lot of the core of what makes it good is somewhat hidden behind some rather plot critical spoilers in the early to mid parts of the book, whose slow revelation is a lot of what goes into making the later parts of the story quite so satisfying.

There’s also something of an issue of character voice – a good number of the characters, even though they have quite different ages and backgrounds – speak in what felt to me like exactly the same voice. That it felt quite similar to my own – mid-thirties, British, female and spending far too much time on the internet – softened the blow somewhat, but the disjoint was occasionally noticeable when, for instance, a very well to do, proper man in his at least forties speaks exactly the same way. It feels very authentic for the core cast of adult characters, and the cultural touchpoints they all lean towards ring incredibly true, with the Spice Girls a strong recurring motif. But by the end of the book, the lack of strong variation in voices starts to feel a little strange, especially in a book that is striving so hard towards (and otherwise mostly achieving) a representatively diverse set of viewpoints.

Relatedly, and mostly in its favour, it is also a book very heavily situated in the now. And in its core themes, this is a great thing, because it is addressing problems that feel like they critically need to be addressed in this sort of urban fantasy, and often aren’t. But on the flip side, it also leans very heavily on the less critical trappings – it’s a book that feels like it will shift to “visibly dated” in not too long, although possibly managing the shift again to “nostalgic” or “classic” later down the line. Because it is heavily rooted in the perspectives of a group of thirty-somethings, and their lives and concerns, and the way they speak to each and relate other in the cultural and linguistic artefacts of the now, and because it takes such pains to realise them in their context of the modern north of England (and it is a very English book), it’s always going to be at the mercy of that context.

But to read it right now, in that context? It’s fantastic.

It is very much a pleasure to read a book that does all the fun, rompy, pacy storytelling I want, but actually gives us a world of authentic problems as well. People can fight the big bad monster and racism at the same time, and the two work together in symphony here, never in conflict. The range of characters and concerns feels far more authentic, far more real, than a book of quietly cis, straight, white characters (if we even know that about them at all) because it feels so much more connected to the world as we live in it. And that’s the core appeal of urban fantasy, at least for me – give me magic, give me drama and adventure, but also give me the pancake shop opposite my old workplace, and memes and slang and the internet and veg box delivery men. Give me people who are like the people I know. Let the real, modern and entirely mundane world be just as magical as the distant, invented one. And it works so much better when the real world we’re shown is… actually real. Is it perfect? No, not at all. But it fills a niche that really needed filling, and does so with joy as well as critique, striking that really tasty balance between thoughtful and escapist.

Bonuses: +1 urban fantasy England but not based in London

Penalties: -1 parts of what fed into the ending were a little abrupt